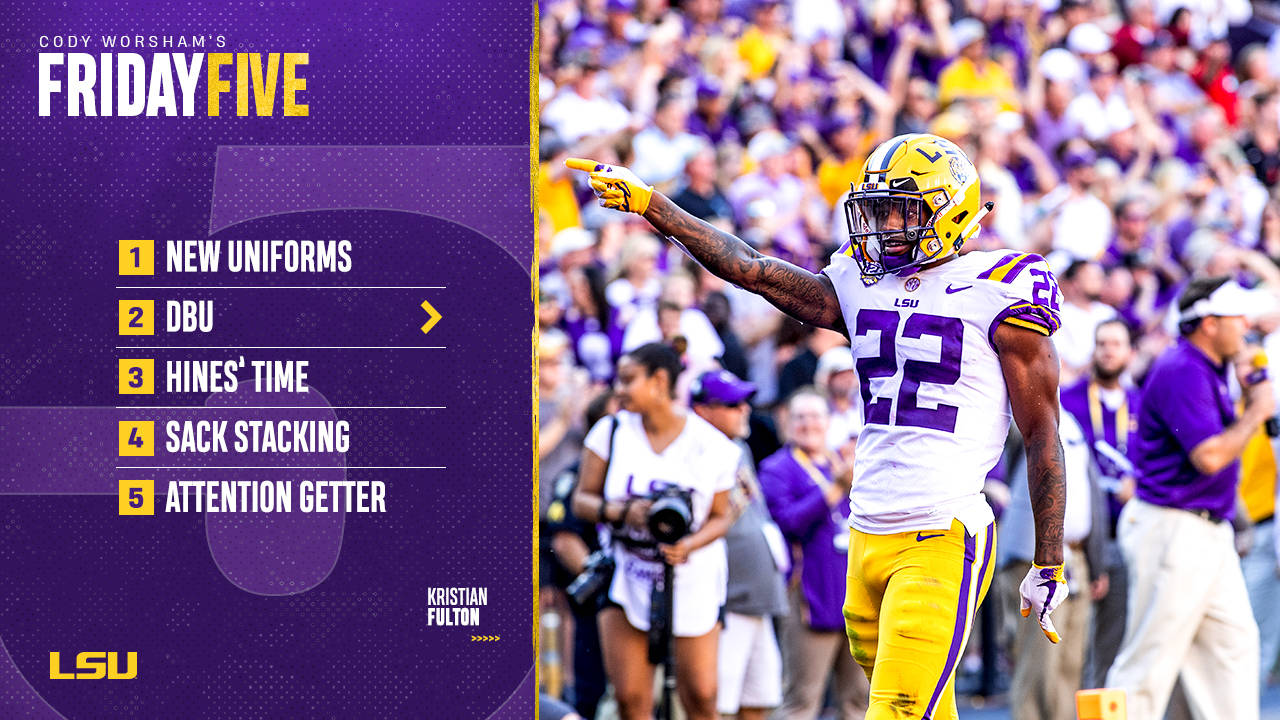 The Tigers will sport a unique look on Saturday night, as they debut their 2018 alternate uniform against Mississippi State.

Uniforms designed for the future that pay respect to the past. #LSU125 pic.twitter.com/qmOmdRPlAF

Ed Orgeron said the players got their first look at the uniforms – designed by Nike and inspired by the 1918 “Silent Season” lost to World War I –  on Thursday and met them with plenty of enthusiasm.

“We showed them why we were doing it, the history behind it,” Orgeron said. “(Equipment manager) Greg Stringfellow gave them a presentation on it. They liked it.”

Saturday’s game will be the only time the Tigers sport the look, before returning to don their traditional uniforms for the rest of the season.

“I like the traditional look, but I think once a year it’s okay, especially this occasion, the honor it is,” Orgeron said. “It’s always good for recruiting.”

Greedy Williams has established himself as a potential first round NFL Draft pick and All-American, and the redshirt sophomore has picked up where he left off last year. Opposing quarterbacks have just an 18.3 passer rating when throwing at him this season, sixth-best among Power 5 corners and second in the SEC.

He’s got help, though, and Orgeron spoke generally about the play of the corners opposite him this season – most frequently, Kary Vincent in the nickel and Kristian Fulton on the edge, with Kelvin Joseph and Terrence Alexander providing depth.

“They’re growing, getting game experience,” he said. “The more game experience they get, the more you can find out about them. A lot of them have tremendous talent and skill, but they have a long way to go to get where they want to go.”

Fulton has enjoyed a breakout year, in particular. He ranks third in the SEC and eighth among Power 5 corners in opponent completion percentage (31.4%) and is coming off a monster performance against Georgia, when he picked off his first career pass.

Orgeron indicated LSU will run out its seventh starting offensive line in eight games, as he plans to start true freshman Chasen Hines at left guard after Hines’ stellar showing off the bench last week.

Hines, who converted to guard from defensive tackle this fall, played a season-high 79 snaps at left guard against Georgia. When the Tigers ran either side of Hines, they picked up 84 yards on 15 carries (5.6 yards per carry), and he didn’t allow a sack or a hit on quarterback Joe Burrow all game.

He’ll get the nod again Saturday, against a tough foe in preseason All-American Jeffery Simmons.

“Chasen Hines is going to start and probably play most of the game,” Orgeron said. “I think he’s doing well. There’s a learning curve, obviously, being a freshman. He’s athletic, he’s physical. He’s got a big test in front of him – Jeffery Simmons is going to be in front of him.”

“We had (four) sacks last game, which is a lot better than none, obviously,” Orgeron said. “But we’re having to do more things to create pass rush than we want to. We’re going to continue to be creative and find the right mix.”

LSU could be without Breiden Fehoko up front – Orgeron said he’s questionable. That could mean more reps for Ed Alexander, who Orgeron said Thursday is good to go, and Glen Logan, who had a big day against Georgia.

Glen Logan in 27 snaps on defense vs UGA:

If anyone is concerned that LSU might overlook Mississippi State – a top-25 team sandwiched between two likely top-two opponents – fear not. Orgeron says the pain of last year’s 37-7 loss in Starkville still stings.

“We didn’t even mention next week,” Orgeron said. “All that was mentioned is how bad they whooped us last year. I think that got their attention and it stayed with them all week.”