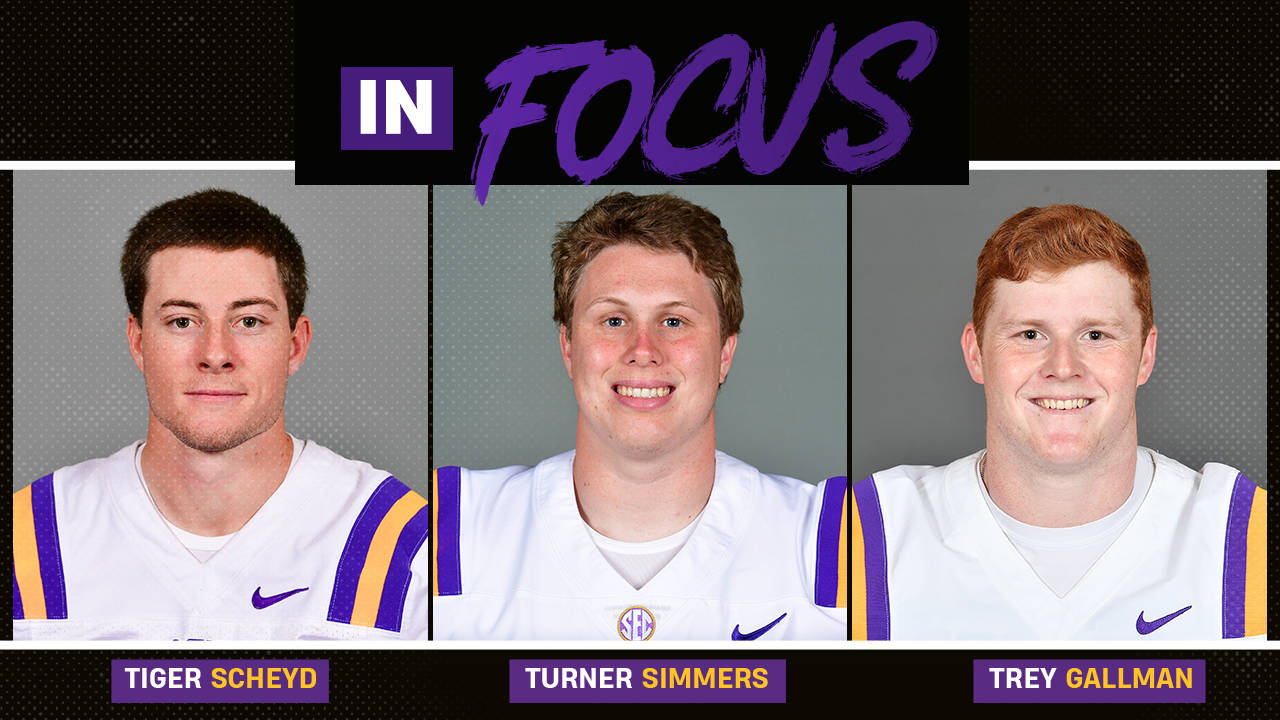 Chances are, the names of fullback Trey Gallman, wide receiver Tiger Scheyd and offensive lineman Turner Simmers will not echo through the speakers on a Saturday night in Tiger Stadium. With the exception of punter Zach Von Rosenberg, LSU’s walk-on football players don’t often see playing time, but they play a vital role in the success of the program – even after they’re done walking on.

During picture day in August, head coach Ed Orgeron awarded scholarships to Gallman, Scheyd and Simmers, who are all seniors, as well as Von Rosenberg, who is a sophomore. There was no planned celebration to surprise the four athletes, but they received a huge round of applause from their teammates after Orgeron announced their names.

“It really wasn’t anything special. I wish it would have been one of those cool things where they film it,” Gallman said. “Coach [Orgeron] said he wishes he could give them out to more people, but he had four, and he felt we were deserving of it, and I couldn’t be more proud of that.”

Surprise was the shared reaction of the three seniors after their names were called during the meeting. Each senior has been with the program since at least 2015, but Gallman has been a walk-on since 2014.

“I was honestly shocked, I didn’t think I was going to get a scholarship throughout fall camp,” Scheyd said. “I just didn’t think we had the numbers for it, but my reaction was pretty much total surprise and complete joy.”

Simmers and Scheyd agree that this season has been different because they have travelled more with the team and seen some playing time.

“It’s been a lot different than years past,” Scheyd said. “Obviously getting the scholarship and starting on some special teams has been better, you feel like you are in the mix a little bit more.”

As a result of seniority, the role each player possesses has become more important. They are responsible for influencing the young players and listening to the needs of coaches.

“One thing I try to do now that I am an older guy on the team is just come to work every single day with a positive mindset and be someone the younger guys can look up to,” Gallman said. “Sometimes my role is playing on special teams, every once in a while, it’s playing on offense, sometimes it’s just being that guy in the locker room who embraces what the coaches need me to do and be somebody the young guys can look up to.”

Simmers believes his role on the team has remained consistent. He focuses on being a football player who can fill multiple positions on the football field.

“It’s similar to what it’s been in the past,” Simmers said. “I am that guy who can go in if you need me. I can just play whatever, or simulate the offense if they need me one week in case we are short on guys.”

Years of hard work have put all three seniors in the position to earn their scholarships. Scheyd believes his extra work contributed to his scholarship. Off the football field, he was just recognized as a Rucks Fellow, which is a student selected by faculty who has a grade point average in the top 10 percent of all graduates in the management curriculum. Between football and class, he has displayed tremendous work ethic.

“Hanging around the leaders of the team, (tight end) Foster (Moreau), (former quarterback) Danny (Etling) and staying after doing a lot of work with them, that definitely helped,” Scheyd said. “Those guys are kind of like a channel to the coaches, so when they say these were the guys who were staying late and doing extra, it puts something good into the coach’s ear.”

“We have good work ethic, the ability to get in there and do the right stuff and make sure we don’t let anybody down,” Simmers said. “We have all tried hard in the classroom, we have all graduated. Just really working hard and making sure you keep up with everything and not getting dragged down.”

Out of all the lessons learned through the years at LSU, Gallman believes patience has been the most important. After all, it does require patience for a walk-on to earn a scholarship, playing time, and possibly even hear their name echo through the air on a Louisiana Saturday night.

“Patience for sure is something I learned,” Gallman said. “Patience and being able to come to work every single day and put forth your best effort and knowing that good things do come to those who wait and you do reap what you sow.”