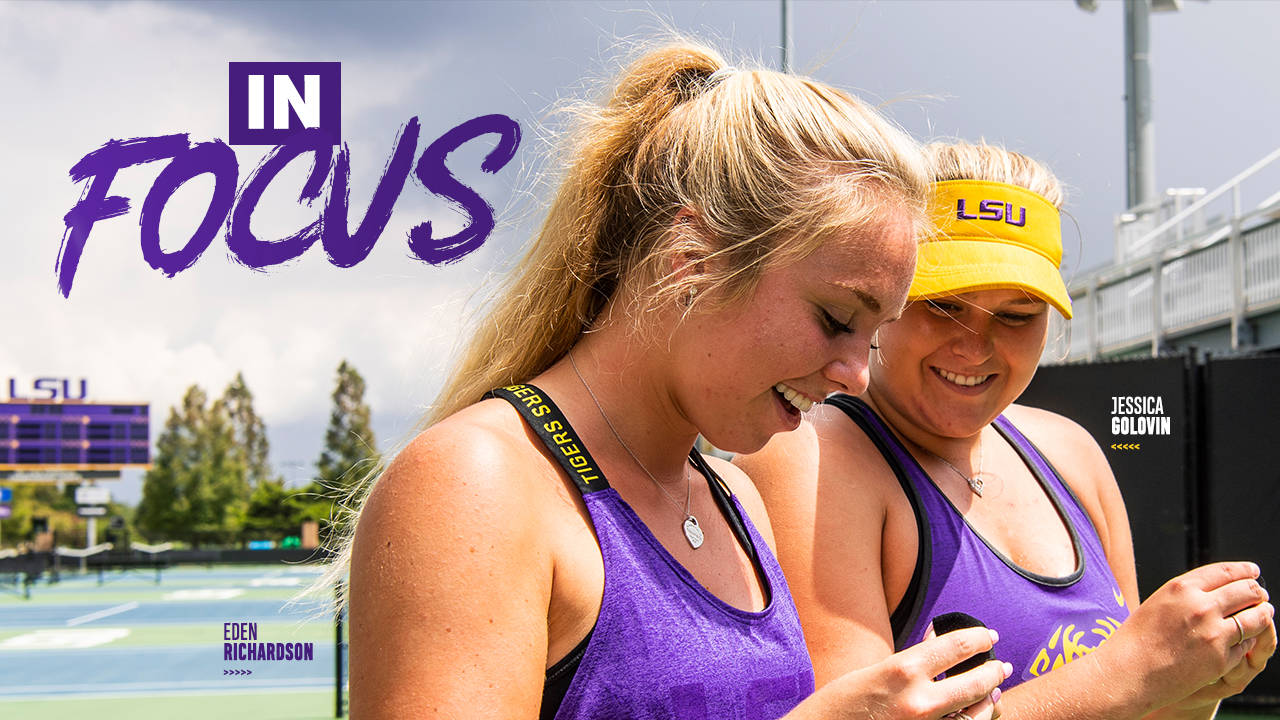 Yet six months later, it still hasn’t sunk in for Richardson, now a sophomore.

The week of the NCAA Tournament in Winston-Salem, N.C., and leading up to the championship round, the pair made sure to get into a rhythm of doing the same things every day from their practice routines to the food they ate at the same restaurants.

“We got quite superstitious,” Richardson said.

That’s where the M&M’s come in.

The relationship that Golovin and Richardson built throughout the season played a major role in the duo’s success all the way through the national championship.

“We just click,” said Golovin, now a senior. “We have our moments where we just laugh on the court, and I think sometimes even getting away from the court helps us. We know each play we are going to play ahead of time and we know what the other one is thinking. We know each other well, so it’s easy to figure each other out when we need to.”

However, there was a time when the pair didn’t mesh well together, and co-head coach Julia Sell almost split Golovin and Richardson up.

“It’s really ironic,” Sell said. “We joke with them all the time. There was a week in February where we almost separated them. They were struggling and being stubborn about some adjustments, and I remember specifically the day we just hammered it out. That day they made some shifts and everything just started to click after that, not just with their games but with their personalities and the way they worked together and the way they communicated.

“They just kept getting better and better. They communicate clearly, positively and they are both incredibly competitive. What they did in that tournament, it wasn’t surprising. But it started that day in February and it just kept building all the way through.”

The duo cruised through the rest of the season after that one day in February and ended the season with a 19-8 record. They also picked up six wins against Top 15 teams, ultimately landing the pair a spot in the NCAA Tournament at No. 29.

“They were actually the last team in the draw at NCAAs and they won it,” Sell said. “I think it’s a testament to not only their hard work, but the way that they are improving.”

“During the finals I remember the night before, I told Eden, ‘We can do this,’” Golovin said. “I knew I had to be the leader in that situation, and I knew it was her first time so I had to be a leader at the moment. I remember being so excited and I knew this was such a huge opportunity for us and for the school. We wanted to make history.”

And history they made. In the program’s 42-year history, it was the first time that an LSU pair would even compete in the championship round of the NCAA Tournament.

“We strive to win,” Golovin said. “We were really good competitors that day. That’s why we did well. We just competed.”

The LSU pair faced off against the country’s No. 13 ranked duo from Oklahoma State.

During the final, a weather delay moved the match indoors. Richardson said the move worked to the duo’s advantage and that they play better and more aggressive indoors.

“On the day, we were obviously nervous, but I think we used it in a good way,” Richardson said. “We were excited for it.”

It didn’t take long to claim the title as Golovin and Richardson defeated their opponents in straight sets by scores of 6-3, 6-2.

“We just have to keep going,” Golovin said. “I just want to make sure to have a good senior season, and I know that she’s a competitor. She’s awesome and I love playing with her, so I know that we’re going to keep going and I think as the season goes we get better and better. The more match play we get, it’ll be more solid and it will be good for us.”

While the stakes are high for this season, Golovin and Richardson know what it takes to make it to the end: blood, sweat, tears and a few M&M’s.