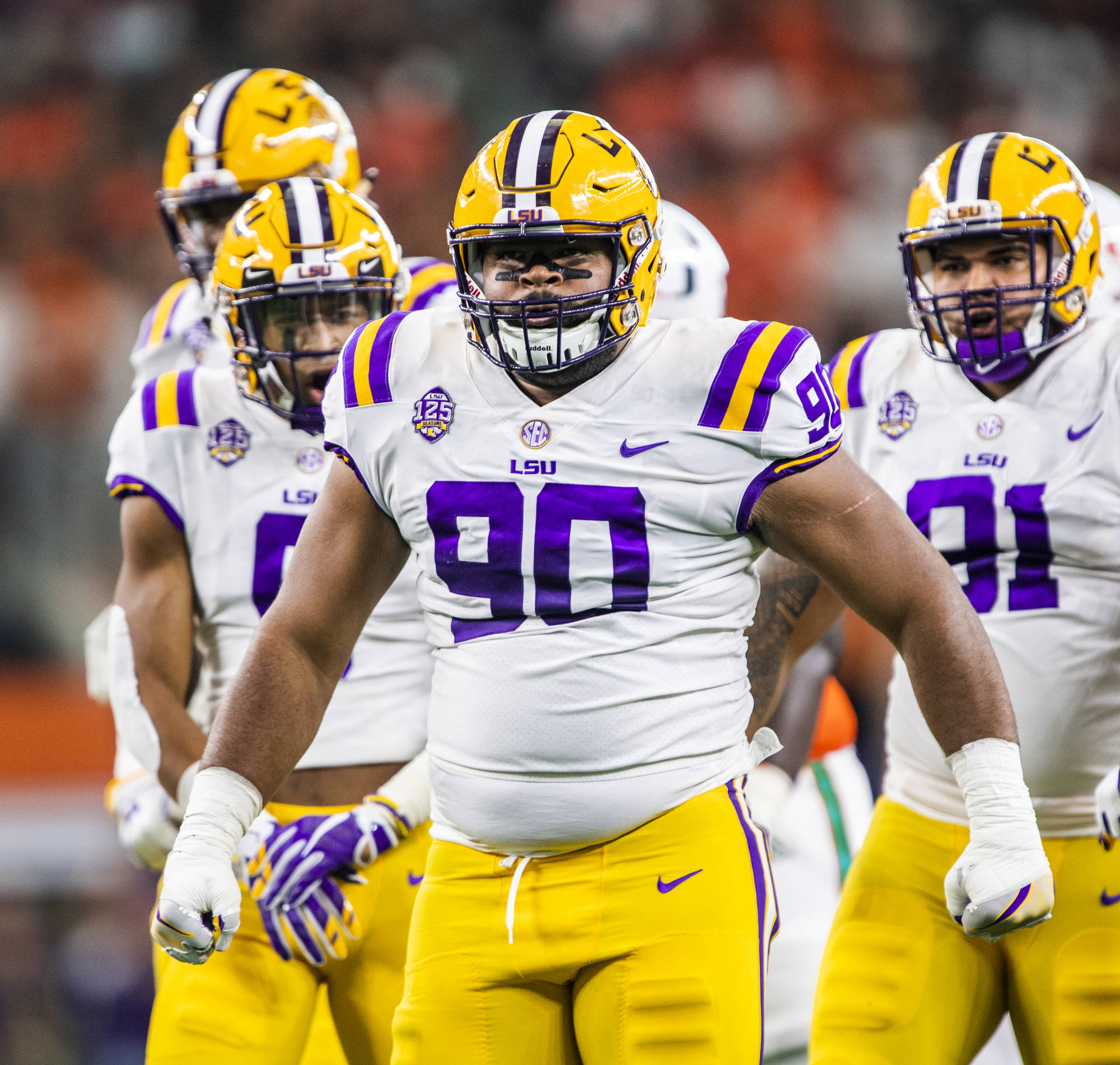 He can be a Teddy Bear or a Chucky doll.

What, exactly, do you need Rashard Lawrence to be? Whatever it is, chances are, LSU’s junior defensive lineman can play the role.

And, chances are, he can play it well.

GRANT DELPIT NEEDS Lawrence to be a road grader.

LSU’s sophomore safety is in the midst of a breakout season, racking up sacks, tackles for loss, and interceptions at absurd rates for a defensive back. Delpit stuffs the box score every night, but if you ask him, he’s simply cleaning up Lawrence’s leftovers.

“He’s constantly in the backfield, opening up holes for us to come make plays,” Delpit says. “We wouldn’t put up numbers if he and the other guys up front weren’t doing the dirty work.”

Such is the life of a defensive lineman, particularly in a 3-4 defense. It’s a scheme coaches call “two-gap” – basically, each of the three men in front can be responsible for the hole in the offensive line to either side of him. It means double teams. It means doing the dirty work that nobody notices – except coaches and teammates.

Rashard Lawrence (@timetoshine_99) has 7 run stops this year. That ranks third in the SEC and eighth among Power 5 d-linemen. #LSU

“There’s been games like that for all the guys on the defensive line,” Lawrence says, “where we probably didn’t have 10 tackles or three sacks, but so many times we’ve helped the defense out that goes unnoticed for the normal eye. But you get credit for it in the film room.”

Much of Lawrence’s game is subtle, which wasn’t always the case. An All-American coming out of Neville High School, Lawrence collected scores of sacks and tackles for loss in high school on his way to earning five-star recruit status and offers from schools across the country.

But Lawrence’s talent didn’t necessitate immediate playing time when he arrived to LSU. He needed to learn the nuances of defensive line play his physical dominance made superfluous in high school. As a freshman, Lawrence played just 101 snaps, but the midseason coaching change that came his first season proved a blessing in disguise.

That changed the trajectory of Lawrence’s career.

“Coach Pete is the reason I’m starting today,” he says. “When he took over, I wasn’t playing much. I was struggling with technique things. He came in and showed me the basics of hand placement, tip of the pad, proper pad level. When he took over as defensive line coach, it did wonders for my game.”

Lawrence thrived, and he thrived through injury. Despite a nagging ankle issue, Lawrence played 406 snaps in nine games as a sophomore, grading out as LSU’s third-best defensive regular behind Greedy Williams and Donte Jackson. He ranked fifth among SEC defensive linemen in pass rush productivity, and he did so while battling a bum ankle.

It’s why Jenkins lit up this summer at his annual lineman camp when asked about Lawrence.

“I’ve been coaching 52 years,” Jenkins said. “He might be the toughest player I’ve ever coached. He is a tough hombre… I think he’s destined to be one of the top guys who ever played [at LSU].”

It’s 6 a.m. on game day, and Fehoko just wants a few more minutes of sleep. The defensive linemen are roommates on the road and before home games, which means game day mornings are louder than Fehoko prefers.

“The day of the game, he’s up at 6 a.m.,” Fehoko laughs. “He’s got his music blasting, rapping in the room. I’m over here turning over, telling him to go to sleep.”

Nights aren’t any better. Lawrence makes noise then, too, whether he’s snoozing or not.

“Bad snorer,” Fehoko laughs. “I can’t sleep with him at all. I’m always in bed before him, because if I’m not – I can’t hear his snoring all night long. I’ve got to be asleep before him. And he’s always singing in the room the night before the game. I’m like, ‘Bro, shut up.’”

But nothing gets him quite as hype as Gwen Stefani.

“That’s my song,” he admits. “My girlfriend knows I’m always listening to it. She’ll catch me singing it with my toothbrush in my mouth.”

The song and his love for Stefani shine a spotlight on Lawrence’s softer side. As fierce as he can be on the football field, Lawrence is a bright personality away from it.

“He’s a big Teddy Bear, because he’s so sweet,” says linebacker Devin White. “He doesn’t have a bad bone in his body. He makes straight A’s, and people don’t even talk about it. He does whatever anybody asks of him. If a fan asks him for an autograph, he makes sure he’ll do it, because that’s the kind of guy he is.”

That’s a product of parenting, Lawrence says, crediting his mother and father for raising him to be equal parts humble and hungry.

“I like to be a guy that’s very humble and like a teddy bear off the field,” he says. “But on the field, I want to be a monster. I want to play hard. I want to be aggressive. It’s like the opposite of a Teddy Bear – being a Chucky.”

The sophomore defensive lineman has transformed over the last year. He considered transferring after playing little as a freshman, but when he moved in with Lawrence, his life changed. He cleaned up his diet and dropped 40 pounds. He started sleeping better. He went from the end of the bench to the end of the first-team defensive line, opposite Lawrence.

He also got his schoolwork done in time. Every night.

“He makes me do my homework right there in front of him,” Logan says of Lawrence. “He doesn’t let me mess up at all.”

It’s the role Lawrence perhaps plays best: leader. His teammates call him Uncle Phil, a reference to the role played by the late James Avery on the ’90’s sitcom “The Fresh Prince of Bel-Air.” It’s a nod to their physical similarities – large, physically intimidating presences – as well as their roles as the responsible figures in the lives of young men slowly, sometimes-reluctantly maturing.

“He acts like a grown up,” Logan says. “He acts like my dad sometimes. Being around him helped me grow up and learn I can’t act like a kid anymore.”

Of all the roles Lawrence plays, being a leader is the one he’s proudest of. Unless there’s a camera around – he’s an aspiring television analyst, hoping to follow in the footsteps of ex-Tigers Booger McFarland, Marcus Spears, and Ryan Clark as an on-air presence – he prefers not to talk, instead leading by example.

“It’s tough being a leader in the SEC,” he says. “You have to lead guys who are older than you or younger than you. I just try to do a good job of showing guys how I work. If they see you working hard, they’ll respect you.”

“He’s been a leader all his life,” says White, a fellow North Louisiana native who has looked up to Lawrence since their prep days. “He’s been on winning teams in high school, in college. But he never lets the game get bigger than him. He’s a great brother. I’ve been knowing about him all my life. I look up to Rashard. I’m older than him, but I look up to him.”

White’s not in exclusive company. Teammates, fans, and defenders he’s chucked to the ground – all look up to Lawrence. Simply add role model to the long list of roles he’s embraced, and see which one he masters next.