Soccer Hits Road for Away Match at Tennessee 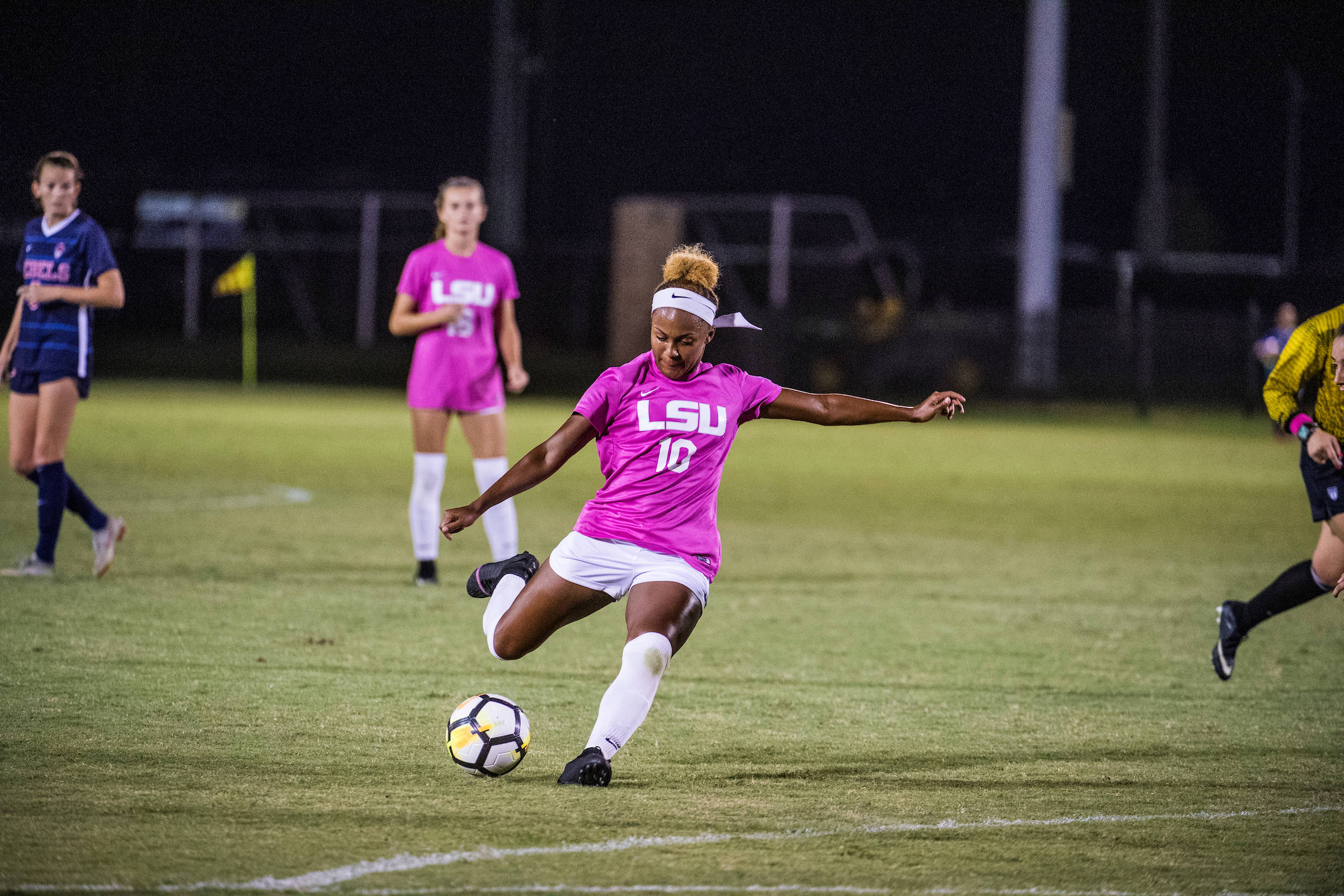 Baton Rouge, La. – Winners of three of its last four matches, the LSU soccer team (9-5-1, 3-3-1 SEC) is all set for an away match against No. 18 Tennessee on Thursday evening in Knoxville, Tenn. First kick is set for 6 p.m. CT at Regal Soccer Stadium.

Tennessee sits three points ahead of the Tigers in the league standings with 13 points … the 13 points has them in sole possession of fifth place in the SEC … the Vols are 4-1-1 in their last six matches … they own a record of 6-2-0 at home this season.

LSU enters the week with its highest Ratings Percentage Index ranking of the season in the No. 46 spot. LSU’s final three matches are against teams who own RPIs of 15 or better. Tennessee’s RPI comes in at No. 14, South Carolina is in the ninth spot and Mississippi State is sitting in 10th place. The RPI weighs the record of each respective team to go along with their strength of schedule.

Six of LSU’s top eight scorers in 2018 are underclassmen. Adrienne Richardson, a sophomore transfer from Florida State, leads the way with 13 points (6g & 1a) and is followed by freshman Abbey Newton who has accounted for 10 points (4g & 2a) in her debut season. Lindsey Eaton (sophomore) collected her third goal of the season in last Thursday night’s win over Ole Miss; her goal in the 75th minute of play was the first game winner of her career. Molly Thompson (freshman) and Tinaya Alexander (sophomore) have accounted for four points apiece and defender Lucy Parker, playing in her second season, has added a goal. The Tigers have played up to as many as eight underclassmen on the field at once this season.

The Tigers continued their winning ways at home with a 3-1 victory over Ole Miss last Thursday night. After trailing by one entering halftime, the Tigers stormed back to score three second half goals en route to their third SEC win of the season. Alex Thomas cashed in on a penalty kick, her third of the season, in the 47th minute and Lindsey Eaton scored the game winner in the 75th minute to put LSU up for good; the goal for Eaton was her first-career game winner. Less than two minutes later Abbey Newton headed in an insurance goal in the 77th minute to give the Tigers a two-goal cushion. Caroline Brockmeier made three saves during the game including a penalty kick save in the 84th minute where she denied Ole Miss’ Cece Kizer. The victory was LSU’s first comeback win of the season.

Senior all-around performer Alex Thomas has come on as of late and scored a point in the last four games for LSU leading the squad to a 3-1-0 record in that stretch. Thomas has done it all this season playing a mix of rightback and forward for the Tigers. She just recently moved into eighth place in the LSU record book for most minutes played in a career with 6,446 minutes of on field time. The New Orleans native has also cashed in four penalty kicks over the last two seasons; that total of four ranks as the third-most penalty kicks made in a career at LSU.

Caroline Brockmeier is having a career year in the net during her senior campaign. She owns career bests in goals against average (1.23 avg.), save percentage (.805), wins (9) and shutouts (8). Her eight shutouts in 2018 rank ninth nationally and her career total is now up to 22 which gives her the second most shutouts in program history. She has racked up 62 saves this season to bring her career total to 240 which is also the second most in school history. Last Thursday night’s win over Ole Miss gave her the 24th win of her career to move her into a tie for third most in school history alongside Megan Kinneman.

Tinaya Alexander owns a share of the team lead with four assists. Two of her four dimes have come in the last four games assisting Adrienne Richardson‘s goal against Alabama and Marlena Cutura‘s goal against Missouri. She also had a multi-assist game earlier this season against Texas State on Aug. 26. Alexander’s .33 assists per game over her career have her ranked sixth in the LSU record book for assists per game.

Marlena Cutura is having the best season of her collegiate career in 2018. The junior has career highs in goals scored (3), assists (4) and total points (10) as a stable in LSU’s midfield. Two of her three goals this year have been game winners for the Tigers squad that is 6-0-0 when she scores a goal or assists on one in 2018. She registered the first multi-assist game of her career earlier this season with a matchup against Stetson (Sept. 6). The first came off a corner and the second was a delicately delivered lead ball sent in to Thompson. She scored seven points (2 goals & 3 assists) in a four-game stretch from Aug. 30 to Sept. 9. She has a career high nine points registered in 2018.

LSU has received quality minutes from five freshmen in 2018. Abbey Newton headlines the class with four goals scored to go along with two assists for a total of 10 points. Molly Thompson just added her second goal of the season a week and a half ago against Missouri, and Reese Moffatt and Shannon Cooke have each added one assist apiece. Meghan Johnson has appeared in five total games, two of which were conference matches. Cooke and Moffatt have contributed heavily to LSU’s eight shutouts this season.

Tennessee holds the advantage in the all-time series with a record of 13-4-3 in 20 matches played.