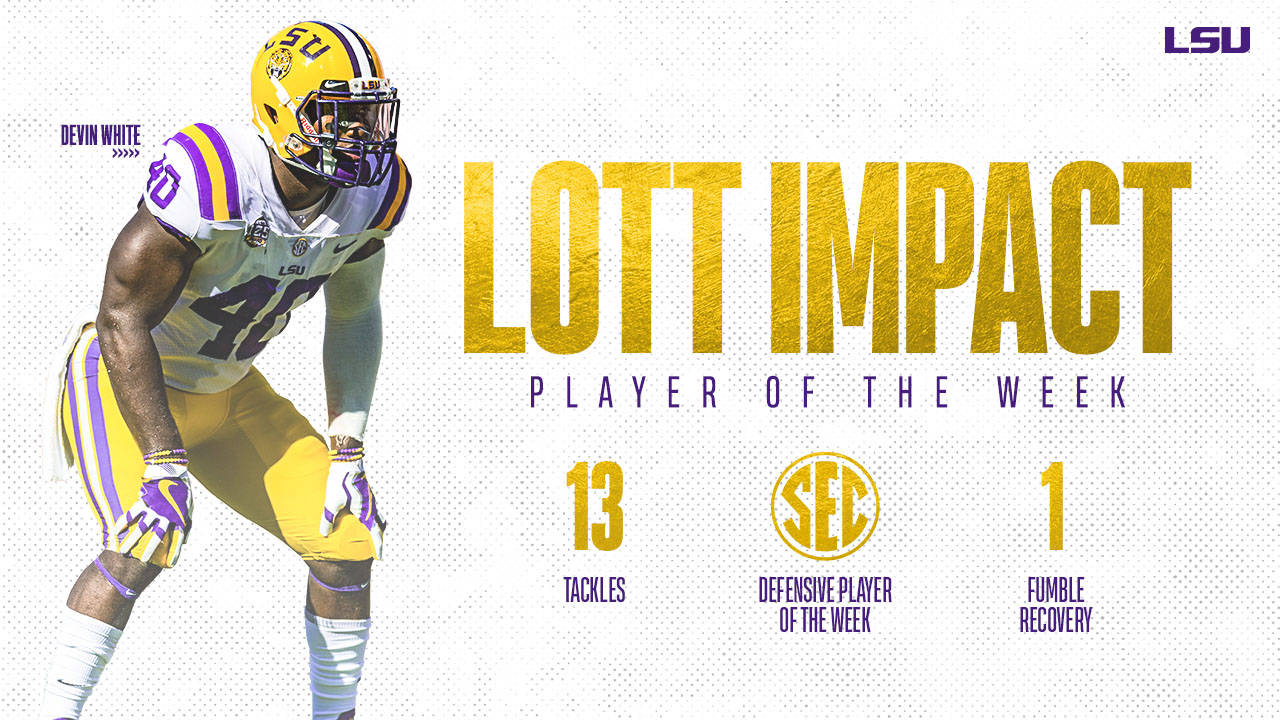 BATON ROUGE – LSU linebacker Devin White picked up another weekly honor on Tuesday as the junior has been named the Lott IMPACT Trophy National Player of the Week, the Pacific Club IMPACT Foundation announced on Tuesday.

On Monday, White was named the SEC Defensive Player of the Week for his performance in LSU’s 36-16 win over second-ranked Georgia.

Against Georgia, White was the catalyst for an LSU defense that held Georgia to season lows for points (16), total yards (322) and rushing yards (113). The previously undefeated Bulldogs came into the game averaging 42 points and 485 total yards a contest.

White tallied a season-high 13 tackles to go along with a fumble recovery, a half-tackle for loss and a quarterback hurry. LSU’s defense held Georgia scoreless in the first half for the first time this year as the Tigers built a 16-0 lead at halftime.

In seven games, White ranks third in the SEC in tackles with 66 and he’s 12th in the conference in tackles for losses with 7.0.

Named after Pro Football Hall of Fame member, Ronnie Lott, The Lott IMPACT Trophy is awarded to college football’s Defensive IMPACT Player of the Year. Founded in 2004 by The Pacific Club IMPACT Foundation, The Lott Trophy is the first and only college football award to equally recognize athletic performance and the personal character attributes of the player.    The Lott Trophy is given to the player who exhibits the same characteristics Lott embodied during his distinguished career: Integrity, Maturity, Performance, Academics, Community and Tenacity. Voters for the award include selected members of the national media, previous finalists, the Board of Directors of the Pacific Club IMPACT Foundation and a distinguished group of former college football head coaches.