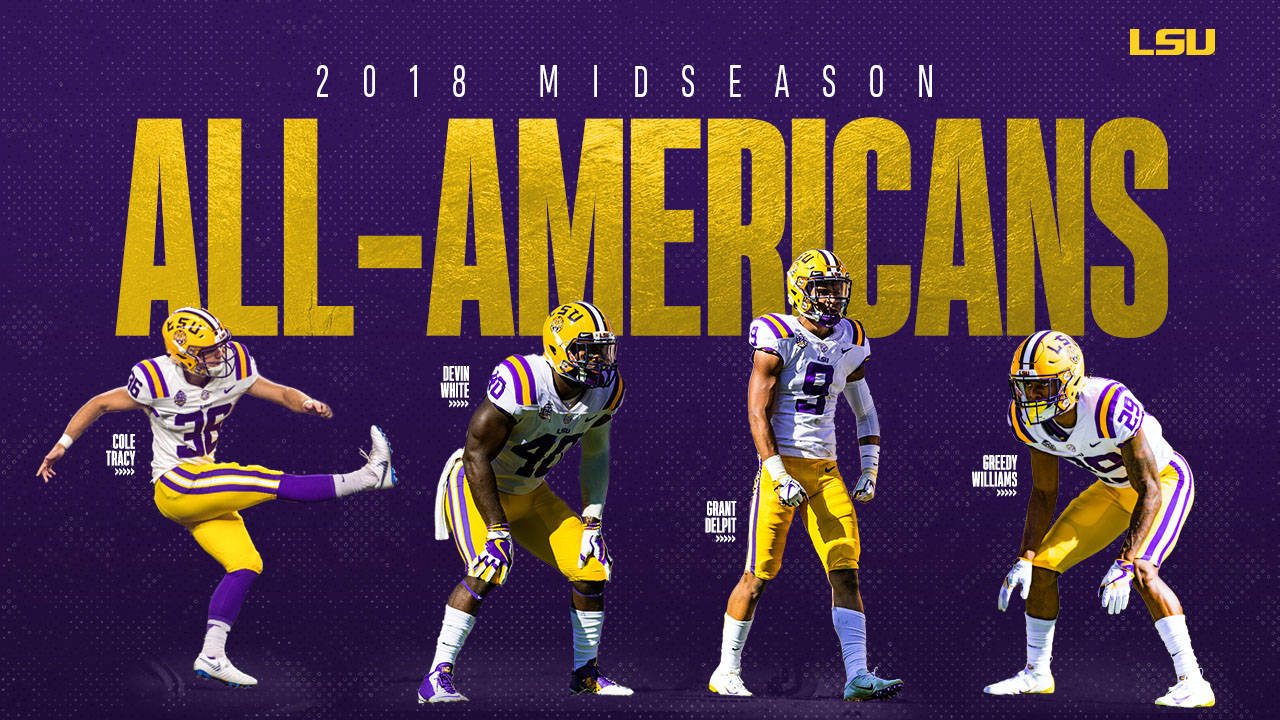 BATON ROUGE – Three defensive standouts – Devin White, Greedy Williams and Grant Delpit – along with placekicker Cole Tracy have been named mid-season All-Americas by various news organizations for their efforts in leading LSU to a No. 5 national ranking and a 6-1 overall mark at the halfway point of the season.

Delpit, White and Williams were all named Mid-Season All-Americas by The Athletic, ESPN, and the Associated Press, while Tracy was recognized by The Athletic and was a second-team selection by the AP.

In addition to his spot on The Athletic’s Mid-Season All-America Team, Delpit was named by The Athletic national writer Bruce Feldman as the nation’s top defensive player for the first half of the season.

In seven games, Delpit has recorded 44 tackles and leads the Tigers in tackles for loss (7.5), interceptions (3), and is second on the team in sacks (3) and passes defended (7). He also has four quarterback hurries, four pass breakups and a forced fumble to his credit.

White, who is this week’s Southeastern Conference Defensive Player of the Week, has racked up a team-best 66 tackles, to go with 7.0 tackles for loss, one sack, three pass breakups, three passes defended and five quarterback hurries. He’s also recovered two fumbles and forced a fumble for an LSU defense that is allowing 16.9 points and 340.3 total yards per game.

Last week against Georgia, White recorded 13 tackles and recovered a fumble in the 36-16 win over the second-ranked Bulldogs. As a unit, LSU held Georgia to season lows for points (16), total yards (322) and rushing yards (113).

Williams, considered the nation’s top cornerback, has 22 tackles, a pair of interceptions and five passes defended for the Tigers.

Tracy, who leads the nation with 17 field goals, has been named the SEC Special Teams Player of the Week three times this year. He kicked the first walk-off game-winning field goal in LSU history in the 22-21 win over Auburn in week 3 and then tied a school-record with five field goals in the victory over Georgia.

Tracy ranks first in the SEC in scoring with 74 points and his 17 field goals already ranks No. 5 on LSU’s single-season list.

LSU returns to action on Saturday, hosting No. 22 Mississippi State at 6 p.m. in Tiger Stadium.