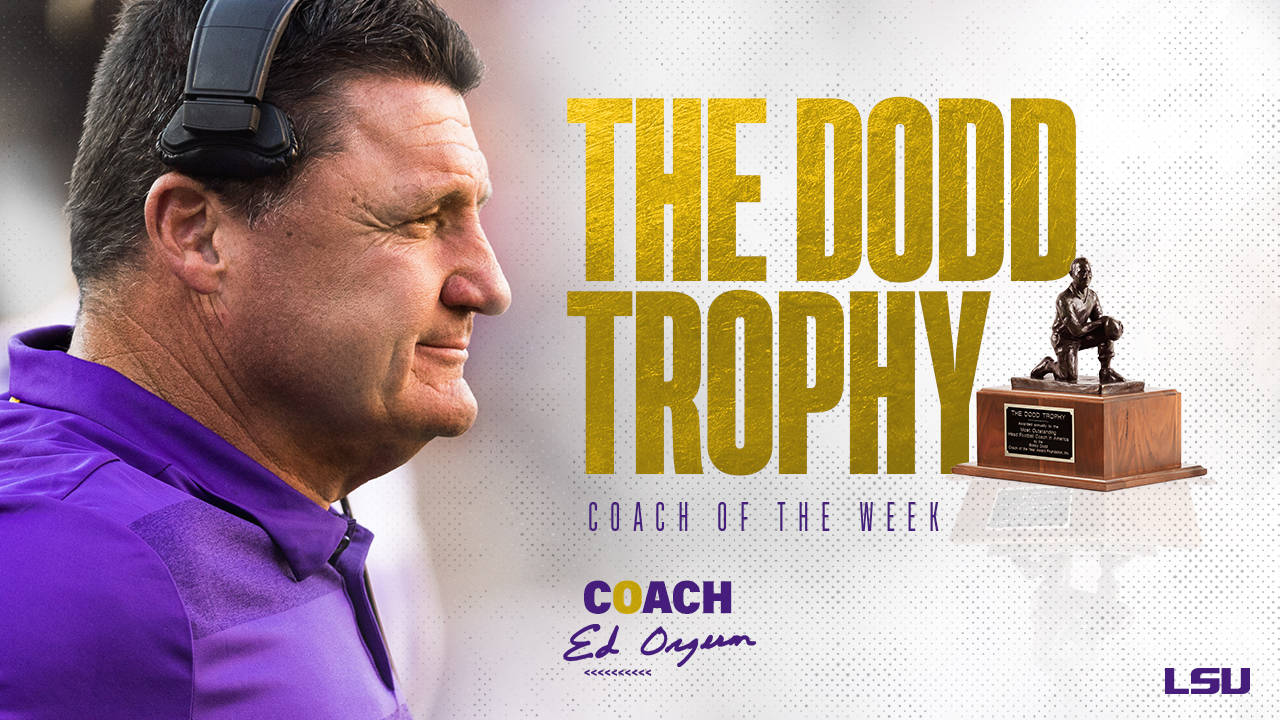 BATON ROUGE – Three days after leading LSU to its 36-16 win over No. 2 ranked Georgia in Tiger Stadium, head coach Ed Orgeron has been named the Dodd Trophy National Coach of the Week, the Bobby Dodd Coach of the Year Foundation and the Chick-fil-A Bowl announced on Tuesday.

The Dodd Trophy Coach of the Week award honors the football coach whose program embodies the award’s three pillars of scholarship, leadership and integrity, while also having success on the playing field during the previous week.

Against Georgia, LSU racked up 475 total yards, including 275 on the ground, which was the most given up by the Bulldogs all season. The Tigers were also a perfect 4-of-4 on fourth down conversions and forced four turnovers in the victory.

Defensively, the Tigers held a Georgia offense that came into the game averaging 42 points and 485 total yards to season lows for points (16) and total offense (322).

The win over the second-ranked Bulldogs marked the first time LSU beat an opponent ranked that high in Tiger Stadium since knocking off top-ranked Florida in 1997. It was only the third time in school history LSU beat a team at home ranked either No. 1 or No. 2 in the nation (LSU defeated No. 2 Ole Miss in 1961).

“Coach Orgeron and the Tigers have compiled one of the most impressive resumes to date of any team in the country,” said Jim Terry, chairman of the Bobby Dodd Coach of the Year Foundation. “This was a statement win and LSU looks poised to be a true College Football Playoff contender this season.”

Orgeron has a 21-7 overall mark as head coach of the Tigers and 17 of those victories have come by double-figures. LSU is currently 6-1 overall and ranked No. 5 in the nation in both polls. Three of LSU’s six wins have come against teams ranked in the Top 10 in the nation.

“Coach Orgeron has shown tremendous leadership both on and off the field for the Tigers,” said Peach Bowl, Inc. CEO & President Gary Stokan. “The fact that LSU is now 7-0 under his leadership following a loss is a true testament to his ability to rally his team to victory when facing adversity.”

A panel consisting of all previous winners, national media, a member of the Dodd family and a College Football Hall of Fame member will identify the final list of potential recipients for The Dodd Trophy at the conclusion of the 2018 season. The winner of the 2018 Dodd Trophy will then be announced in Atlanta during Chick-fil-A Peach Bowl Week.