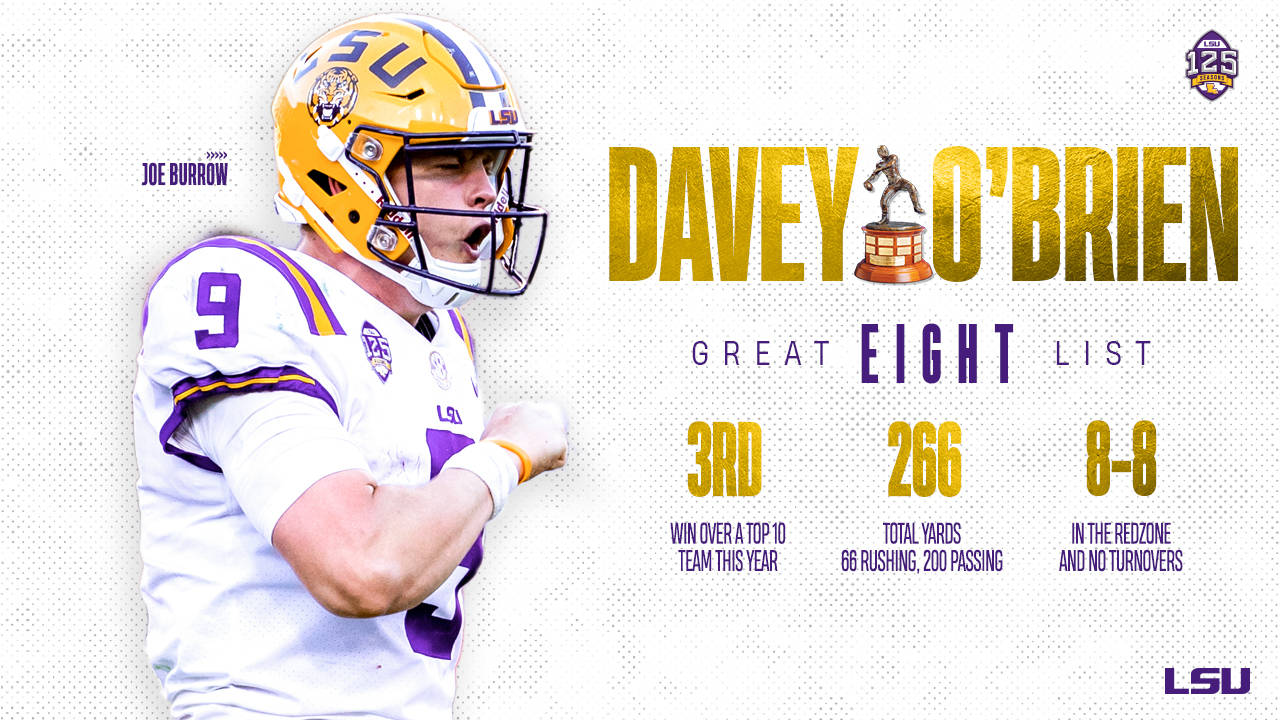 BATON ROUGE – For the second time this year, LSU quarterback Joe Burrow has been named to the Davey O’Brien “Great 8” list for his performance in the Tigers’ 36-16 win over second-ranked Georgia on Saturday in Tiger Stadium.

Burrow, a graduate transfer from The Plains, Ohio, connected on 15-of-30 passes for 200 yards and added 66 rushing yards and a pair of touchdowns in the victory over the Bulldogs. Burrow is now 6-1 as LSU’s starting quarterback with three of his victories coming against teams ranked in the Top 10.

Burrow joins Alan Risher as the only quarterbacks in school history to beat three Top 10 teams in the same season. Risher did it in 1982 with victories over No. 4 Florida, No. 7 Florida State and No. 8 Alabama. Burrow’s win have come over No. 8 Miami, No. 7 Auburn and No. 2 Georgia.

Against Georgia, Burrow directed an LSU offense that racked up 36 points and 475 total yards against a Georgia defense that was allowing only 283 total yards and 13 points a game. The Tigers were a perfect 8-for-8 in the redzone and didn’t have a turnover against the Bulldogs.

Burrow completed passes to eight different receivers in the contest, including six to Justin Jefferson, who finished with a career-high 108 receiving yards.

For the year, Burrow has completed 104-of-195 passes for 1,415 yards, six touchdowns and only two interceptions. He’s also rushed for 242 yards and four touchdowns.

All FBS quarterbacks are eligible for the weekly honor. Thus far, 40 different signal callers have been named to the Great 8 in 2018. Love and Purdy are being honored for the second consecutive week, while Burrow was named for the second time in three weeks. Burrow first earned the award for his performance in the win over Ole Miss.

The winner of the Davey O’Brien National Quarterback of the Week Award, which will be one of the week’s Great 8 quarterbacks, will be announced Wednesday.

The Davey O’Brien Foundation was created in 1977, and the National Quarterback Award, the oldest and most prestigious college quarterback award, was first issued in 1981. The Davey O’Brien Fan Vote, now in its 12th year, gives fans a chance to play a role in determining the award winner by voting daily at VoteOBrien.org.