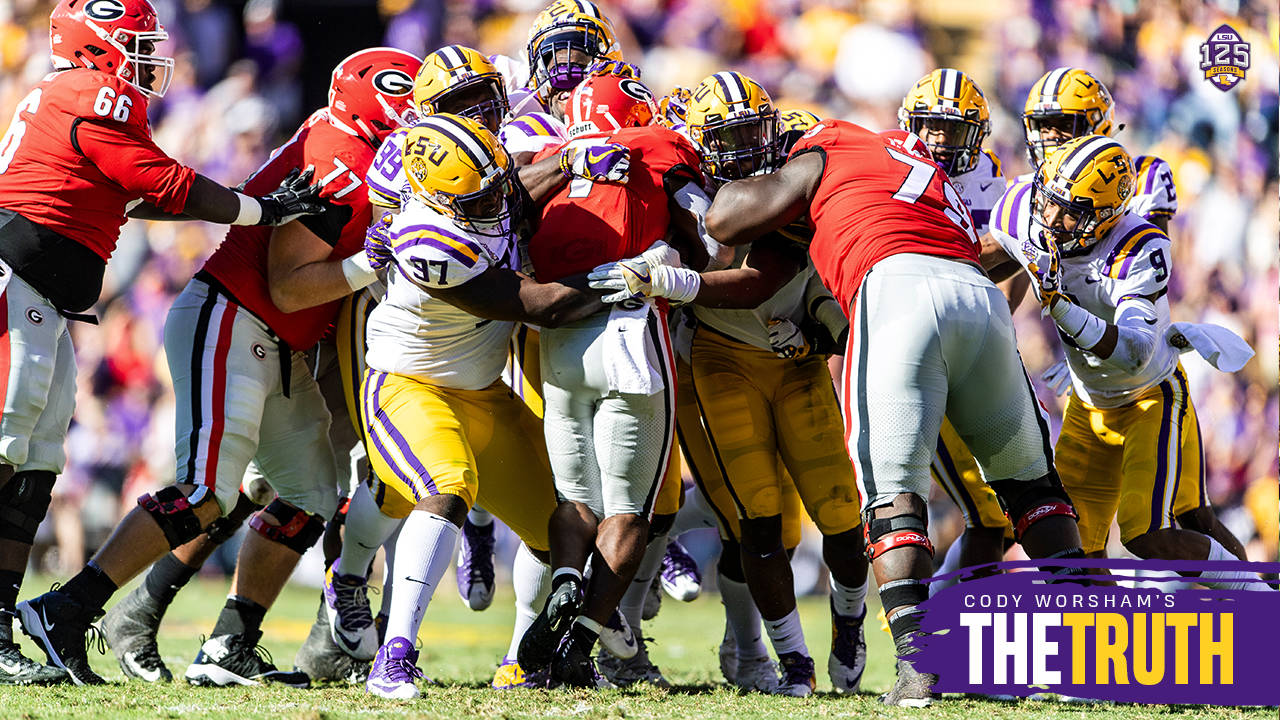 Only one thing surprised Ed Orgeron about his team’s aggressive mindset on Saturday in a 36-16 win over No. 2 Georgia.

It wasn’t how fired up they came out, or how disciplined they were, or how well they executed the game plan.

It was how thoroughly the aggression seeped to all corners of the team.

For all the big plays in the victory, perhaps the one that best sums up how LSU won the game – and how it will need to win future games, starting Saturday at home against No. 22 Mississippi State – is the fourth quarter fumble recovery by kickoff specialist Avery Atkins.

When your kicker is ripping underneath piles for loose balls, you know your team is playing with the right mindset.

Avery Atkins is a former high school safety, and it shows here. pic.twitter.com/6azk4Lam45

“It surprised me, to be honest with you, his aggressiveness,” Orgeron said Monday. “He’s a quiet, mild-mannered kid. He’s a stocky kid. He can go in there and battle. Very smart, 4.0 grade point average. When I saw him get after that ball, it was kind of a cool thing to see.”

It was the physical, on-field manifestation of a mindset the coaching staff tried – and succeeded – to instill in the team following a loss on the road at Florida.

It wasn’t the only such manifestation.

“I talked to them about ‘that look,’” Orgeron said. “We had ‘that look’ Saturday.”

Here are some areas where the Tigers showed their bite on Saturday, areas they’ll need to continue to excel if they are to carry their winning momentum forward.

Orgeron and his staff decided Monday before the Georgia game to use more tempo. It was as much tone-setting as it was strategy.

That decision proved a good one on Saturday.

The key, said quarterback Joe Burrow – who finished 15-of-30 passing for 200 yards while adding 89 yards and two scores on the ground – was avoiding negative plays in order to get into a rhythm.

“It all starts with not having negative plays,” he said. “You can’t go fast if you lose three yards on first down.”

How many teams would let the clock expire to end 1st quarter and think about this 3rd and 1? LSU rushes to line and gets a big run from Edwards-Helaire. pic.twitter.com/RsC8Hc3t1p

The tempo worked best for the running game, and Clyde Edwards-Helaire – who went for a career-high 145 yards – said he could see the tactical edge it provided the LSU offense.

“It was a lot harder for the defense to adjust,” he said. “A lot of teams we’re playing like to put the strength to the back or tight end. When you go tempo, they can’t line up in their go-to defense. Everything we were doing was too fast. That was the X-factor in the running game.”

Tempo was the X-factor, but finishing runs was just as important to LSU’s rushing attack.

Edwards-Helaire became the first back to reach 100 yards against the vaunted Bulldog defense all season, and 115 of his 145 yards came after contact – the most in the SEC in week 7.

On the season, 74 percent of Edwards-Helaire’s yards have come after contact.

“I got put in the scat-back category because of the other backs we have on the team,” Edwards-Helaire said. “I guess I can break tackles. I’ve been doing that since high school. The scat-back term gets tossed in there because I can find open seams and cutbacks.”

Nick Brossette added 64 yards on the ground – 42 after contact. He’s third in the SEC with 423 yards after contact this season, giving Orgeron a nice balance of backs to choose from play-to-play.

“We have certain plays that they run very well, and we let them run those plays,” Orgeron said. “Obviously Clyde is a good zone runner. Nick is more inside. That doesn’t mean Clyde can’t run inside. If I say that, he’s going to get mad at me, because he can run inside.”

Even Burrow added 72 yards after contact, including some on this late run he waited to break.

If Joe Burrow did this to a defender in a pick up basketball game, that defender would be escorted to the exit and told not to come back.

“I knew they were going to squeeze on one of them,” he said of the zone read. “Usually, when teams start to lose, they get antsy on it. I thought about sliding, but decided to make a play and made a play.”

There’s a lot to love about how the Tigers won the line of scrimmage against Georgia, and they’ll need to build on that against a very good Mississippi State front.

The easiest way to break down that success is player-by-player.

Some standouts from Saturday:

Ed Alexander: Orgeron inserted Alexander into the starting rotation at nose tackle, and he was happy with Alexander’s play, saying he played “one of his best games” against a center Orgeron said was one of the best he’s ever seen in college football.

“He’s a two-gap nose tackle that you’re looking for,” Orgeron said of Alexander, who allowed Breiden Fehoko to move outside to his more natural end position. “Breiden is a good football player. Breiden is a really better end for us, more athletic end that you can move around, take on a single block. Ed did a tremendous job on the center. I thought one of the best players. Ed had a tremendous game against him…. We’re going to need him against Mississippi State.”

“He’s physical,” Fehoko said. “He’s a physical specimen. Having Ed in there, you have a true three man front. Ed eats up blockers. He’ll penetrate.”

Ed Alexander had three run stops in 19 run snaps. He can be dominant at the line of scrimmage. #LSU front held UGA to season lows in rushing yards (113) and yards per carry (3.77). pic.twitter.com/BvWeWawyer

Glen Logan: Logan left the starting lineup for Alexander, but his play picked up despite a new role in the rotation. Orgeron called it Logan’s best game as a Tiger, and it showed in the numbers and the film.

Glen Logan in 27 snaps on defense vs UGA:

Michael Divinity: Another game, another sack for Divinity, who now leads the team with four.

Said Orgeron: “Michael is tough. I like Michael. He’s got an energy about him. He’s got a seriousness about him. He’s very smart. He’s a good pass-rusher. He has a nice spin move. He’s gotten a couple sacks off his spin moves. He comes to play. He plays with a high motor.”

This Michael Divinity spin and sack is pure filth. pic.twitter.com/pFqIo0WtkC

5: Michael Divinity is fifth in the SEC is pass rush productivity, with 20 pressures in six games.

41.0: Opposing quarterbacks have an NFL passer rating of 41.0 when throwing at Greedy Williams this season.

41: Greedy Williams has been targeted 41 times this season, the most of any SEC cornerback.