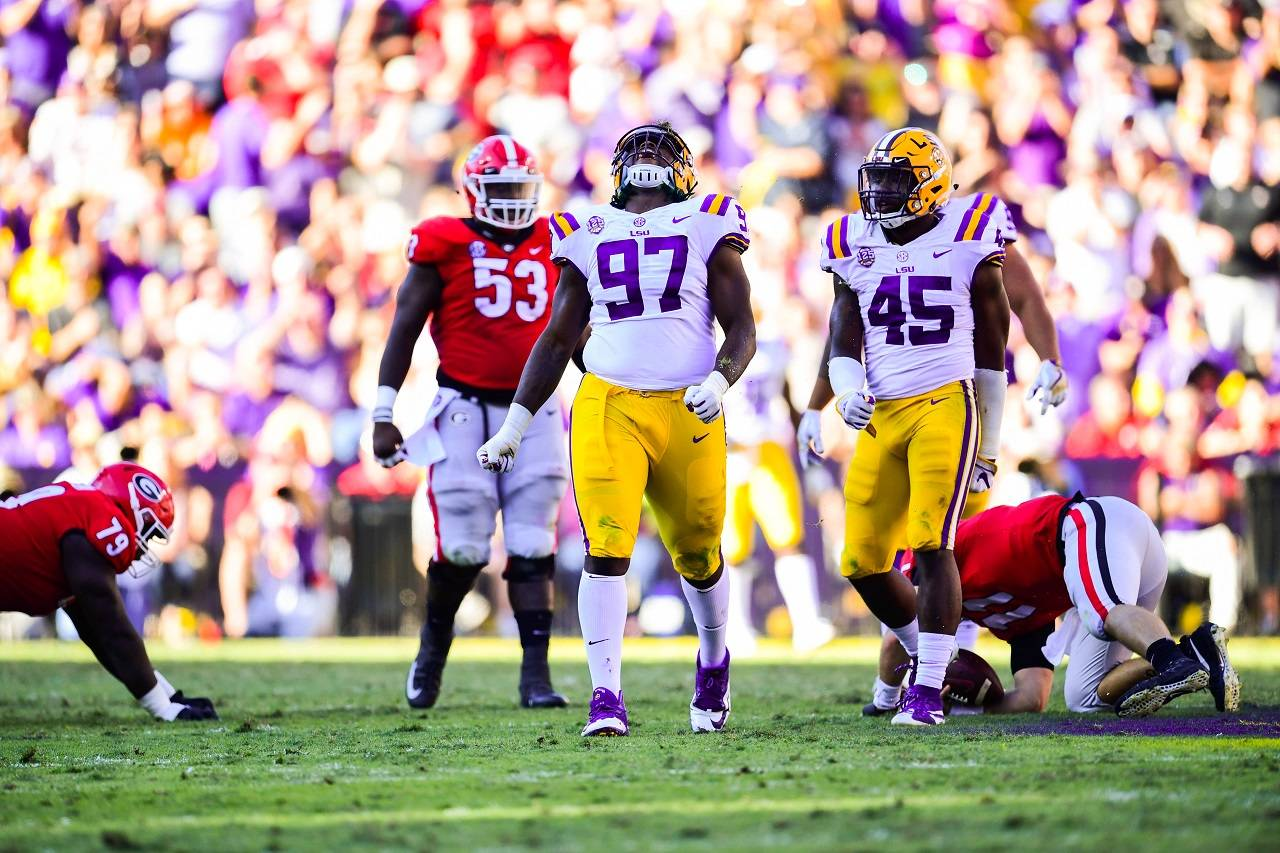 Ed Orgeron made a mistake.

In LSU’s 27-19 loss at Florida last week, he decided to kick a field goal on fourth and short, rather than go for the first down.

“I was a little pissed with myself for not going for it at Florida,” Orgeron said after Saturday’s 36-16 win over No. 2 Georgia. “We didn’t do a good job with game management there. So I said, ‘Hey, I’m going to go for it.’”

All week, the Tigers planned to be aggressive on fourth downs against the Bulldogs, and it worked. They converted all four of their fourth down conversion attempts, including a fourth and goal touchdown from the one-yard line in the second quarter to put the Tigers up 10-0.

Burrow, who converted three of the attempts, said 4th and 1 is all about the brain, not the brawn, and going for it so often fuels swagger.

“It makes us, one, confident, and two, we’re physical enough to get that first dow,” said Burrow, who finished with 200 yards passing and 89 yards rushing, including two scores on the ground. “4th and 1 is all mindset. You can’t block it right every time, because they’ll usually have an extra guy in the box. But if you have the right mindset, you’ll go get that yard.”

Joe Burrow on how 4th down conversions fueled confidence. “4th and 1 is all mindset. If you have the right mindset, you’ll go get that yard.” pic.twitter.com/gvyxWDCCwj

“We work on it every Thursday,” Orgeron said. “We call it the winning edge. Joe’s a big, strong guy. He could play linebacker. We feel he can get a half yard. If it’s half a yard or less, we’re going to take it.”

Clyde Edwards-Helaire, who converted the other fourth down of the night, said it was a discussion point all week that the Tigers would be aggressive on fourth downs. His conversion was a 16-yard scamper that set up the third of five Cole Tracy field goals on the day.

“He talked about it with the offense,” said Edwards-Helaire, who racked up 145 yards on 19 carries. “We had that situation last week, 4th and 1. He said it was a bad decision on his part, but if we went for it, we had to get it this week. He trusted us to do it. We converted 4 times out of 4.”

Orgeron sent the message in practice, and his team sent it on the field: chance favors the aggressor, and it favored the Tigers on Saturday.

Said best by linebacker Devin White: “It ain’t really a gamble, because we know we’re going to get it.”

Edwards-Helaire became the first back to go for more than 100 yards against Georgia all season, and the Tigers improved to 15-0 under Orgeron when a rusher surpasses the century mark.

The sophomore back credited his offensive line for paving the way. The Tigers started the same front five for the first time all season against the Bulldogs.

“The o-line was able to get a lot of push off the defensive line,” Edwards-Helaire said. “That made a lot of our reads open and clear. Being able to get those reads and work to the second level as a running back is something you always wants.”

He wasn’t the only electric playmaker on the day. Justin Jefferson caught six passes for 108 yards, including a back-breaking 36-yarder in the fourth quarter that set up Burrow’s second rushing touchdown of the day and extended LSU’s lead from 19-9 to a comfortable 26-9.

Burrow said he read a Cover 3 and knew Jefferson’s route would be the read. The sophomore wide out did he rest.

It was the longest gain of a six-play, 86 yard drive that helped the Tigers put away a pesky foe. LSU has struggled to extend leads late in games in previous outings, but that problem was nowhere in sight Saturday under the play-calling of offensive coordinator Steve Ensminger.

The defense did its part, too, forcing four turnovers, including the first career interception for Kristian Fulton. The sophomore corner has been dynamic all season opposite Greedy Williams, and he got his reward Saturday when his diving third-quarter effort withstood the scrutiny of instant replay.

Here’s what he saw: “It was third down. I knew they were backed up, so I was expecting a shot. I read my receiver, and he broke it off. That’s when I saw the ball coming, and I made a play.”

“It felt good to have the ball in my hands again,” Fulton added. “It’s been a long time since I caught an interception. Reading my keys, coach put us in a good defense. I just had to make the play. I was positive I caught that one.”

One trick the Tigers leaned on to great success offensively was the use of tempo. Time and time again, LSU’s offense rushed to the line of scrimmage to pick up big gains, including a Burrow dime to Terrace Marshall for 37 yards in the first quarter.

The early use of tempo paid dividends later in the game, too.

“I don’t think Georgia was really ready for that,” Burrow said. “I think they got tired a little bit. It helped our offensive line and running game.”

Jefferson said he noticed on his long late grab the heavy legs of the Georgia secondary.

“They weren’t ready for it,” Jefferson said. “The fastballs kept them on their heels. Then, they got tired fast. Taking those shots when they’re tired, it helps us as an offense.”

For Orgeron, it was, again, about setting the tone: the Tigers were going to be the aggressors on the day.

The momentum of the game swung on a heady play early in the game by – who else? – safety Grant Delpit. After a strong start fueled by a grueling running game, Georgia found itself facing fourth and 9 from the Tiger 14. Rodrigo Blakenship then faked a 31-yard field goal attempt on a play LSU fans know well: the holder-over-the-shoulder toss.

Few saw it coming, but Delpit was one of those few.

“I don’t know how I saw it, to be honest,” said Delpit, who also forced a fumble on the play for one of four Tiger turnovers. “The line didn’t block how they usually block. I just started to fall back because I realized they were going to fake it, and I was able to make the tackle.”

White, who recovered the fumble and finished with a team-high 13 tackles, wasn’t fooled, either.

“You can’t fake nothing on us,” said White. “We were dialed in.”

For Orgeron, it was yet another special play on special teams, where the Tigers continue to play excellent football under first-year coordinator Greg McMahon.

“We always have a guy for the fake,” Orgeron said. “When you play field goal block you have to have eyes on your man, not the field goal kicker. It was tremendous discipline.”

A small adjustment paid big dividends in LSU’s efforts to hold Georgia to just 113 rushing yards on the day.

After the Bulldogs tallied 69 yards on the ground in the first quarter, defensive coordinator Dave Aranda shifted his defensive scheme by sending nose tackle Ed Alexander into the opposite gap of the game plan and inserting White on the other side.

Just 44 more yards on the ground for a talented Georgia running game.

Rushing yards by quarter for UGA

“We were playing one certain defense,” Orgeron said. “It wasn’t working. We changed to play another. It worked to stop them. We were shaded one way, and then we went and shaded another way.

“They started running the football on us. Dave made some adjustments. We challenged our defensive line, especially Ed Alexander. That’s one of the best centers we’ve seen. I thought he played one of his best games tonight.”

Another battle won up front? The Tiger pass rush got in the face of Georgia quarterback Jake Fromm, who struggled to the tune of 16-of-34 for 209 yards and two interceptions.

The Tigers posted three sacks, including

“We worked on it all week in practice,” said Glen Logan, who had 1.5 tackles for loss and a sack. “We talked about using new moves, getting on the edge, extra conditioning in practice, which helped us, because we didn’t get tired as much. We listened to some of the stuff that was talked about us, but it was something we had to change.”

“We got pressure, but we never got to the quarterback and got the sack,” said Michael Divinity, who also picked up a sack, his team-leading fourth of the season. “It was just executing. Last week, we were right there. It was just that extra push and drive. This week, we brought it.”