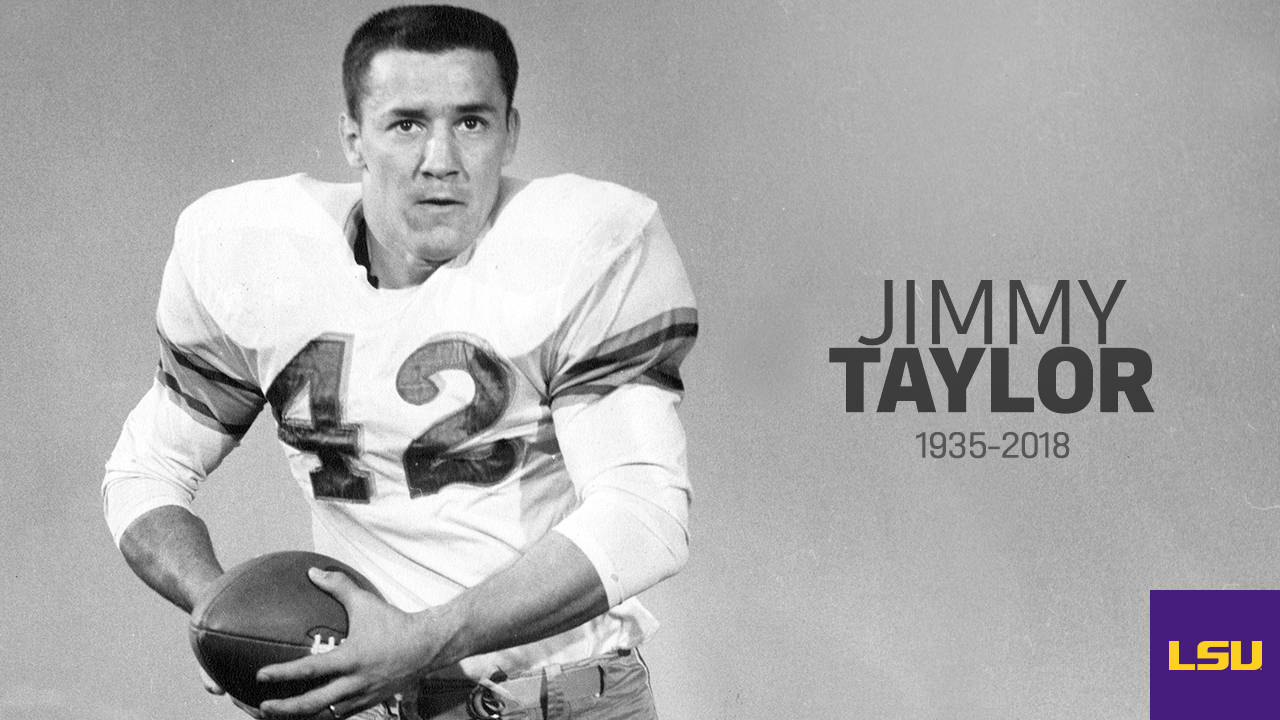 Taylor was one of the more well-known players from the era of the 1950s who didn’t play on the 1958 national championship team. Taylor played at LSU from 1956-1957 and after being drafted by the Green Bay Packers, went on to play the 1958-1966 seasons there before leaving the team for the expansion New Orleans Saints for the 1967 season.

“Jimmy was the ultimate LSU guy,” said LSU Vice-Chancellor and Director of Athletics Joe Alleva. “He bled purple and gold as well as Green Bay green and gold. He was always around, so passionate about LSU and such a great person. Obviously, he was a great football player, but he was a really great person, too, and he added so much to our community and to our University. He’ll definitely be very much missed.”

The Saints also put out the following statement: “We extend our deepest sympathies to Helen Taylor and all of the family and friends of Jim Taylor. Jim played an important role as a member of our franchise’s inaugural 1967 team and was rightfully beloved by generations of Saints fans and our entire organization. We will always be grateful for his many contributions to our team and community,” said Justin Macione, Director of Football Communications/Publications Director for the Saints.

“Jim Taylor lived life the same way he played football — with passion, determination and love for all he did,” Pro Football Hall of Fame president and CEO David Baker said in a statement. “The entire Hall of Fame family mourns the loss of a true hero of the game and extends heartfelt condolences to his wife Helen during this difficult time.

While at LSU Taylor, playing alongside the late Billy Cannon, led the SEC in scoring in both 1956 and 1957 and earned first-team All-America honors as a senior. In 1956, running and kicking, he scored 59 points and also played middle linebacker for Coach Paul Dietzel as college players in that day usually had to play both offense and defense.

In 1957, the Football Writers Association of America All-America scored 86 points for the Tigers (first in the country) and rushed for 762 yards (tops in the SEC).

He rushed for 1,314 yards and scored 20 rushing touchdowns at LSU. The pair of Taylor and Cannon combined to account for over 1,500 yards from scrimmage and 17 touchdowns. Taylor concluded his career playing in the Senior Bowl and was named the game’s MVP.

Taylor was a second-round pick of the 1958 NFL Draft by the Green Bay Packers and was used sparingly as a rookie. But legendary coach Vince Lombardi took over in 1959 and Taylor soon became the team’s all-purpose back.

In his NFL career he rushed for 8,597 yards with 83 rushing and 10 receiving touchdowns.