No. 12 Tigers Ready for Clash with No. 2 Georgia 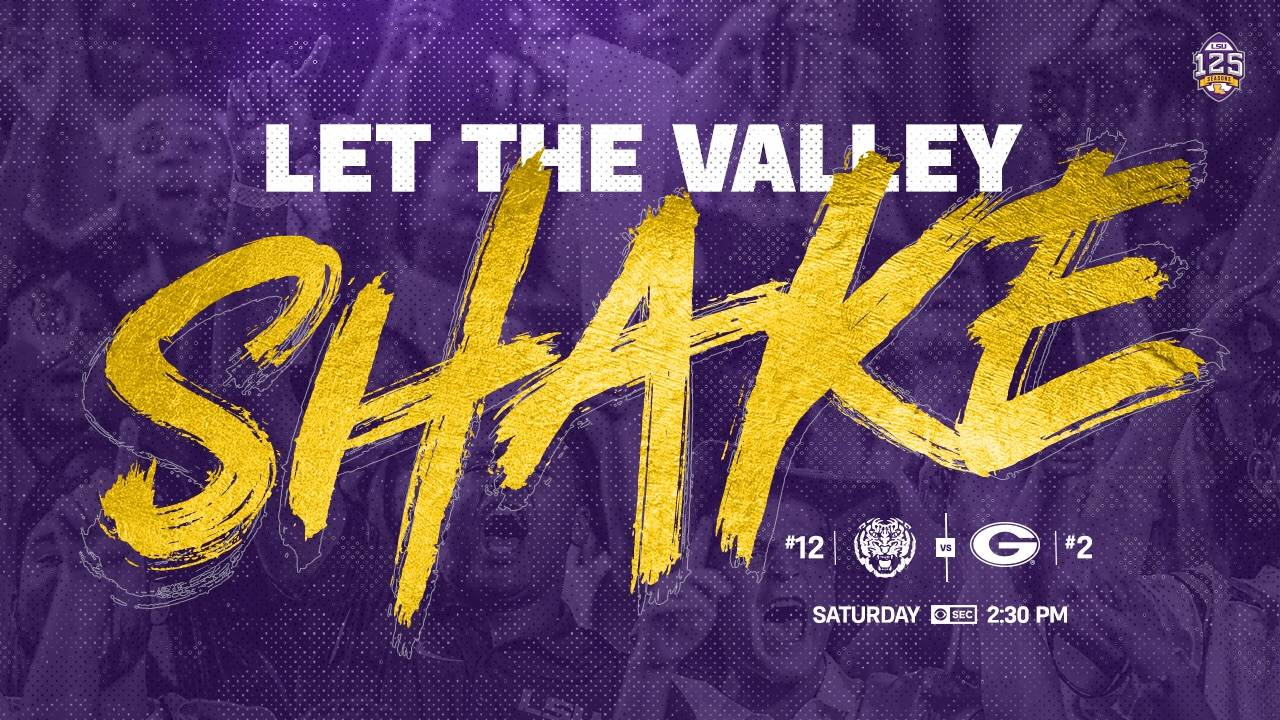 CBS will televise the game and stream online at CBSSports.com. Fans can also catch the call of the game on the LSU Sports Radio Network and online at www.LSUSports.net/live.

The Tigers will look to improve to 7-0 under Ed Orgeron in games that follow a defeat, after dropping a tightly contested 27-19 decision in Gainesville last weekend. Not since 2015 has LSU dropped back-to-back decisions.

Hey Tiger Nation, You Got Our Back?
It’s time to Let the Valley Shake! pic.twitter.com/zcKBVA5ZIw

Georgia, the defending SEC champions and national runners up, is coming off a 41-13 win over Vanderbilt.

LSU’s offense is averaging 31.3 points per game halfway through the season, and the Tigers could start the same offensive line in consecutive games for the first time all year, giving some much-needed continuity in the trenches.

The Tigers started Adrian Magee at left guard last week in the absence of injured senior Garrett Brumfield, and the versatile lineman will likely return to that spot, having had just two days of prep there before the Florida game.

“We’re going to leave him there,” Orgeron said. “We thought about switching him back to tackle. We didn’t think that would be fair to him or the offensive line to be able to block another great front, another different position, so we wanted to keep it the same this week.”

As part of Saturday’s pregame show, the SOCOM Para-Commandos will fly into Tiger Stadium! https://t.co/uY7LlfBKa0 pic.twitter.com/z60Qs8OzL8

On the ground, Nick Brossette is coming off a solid 95 yard, two touchdown outing against a tough Gator front. The senior from Baton Rouge is tied for the SEC lead with eight rushing touchdowns, and he ranks fifth in yards per game (96.0).

His running mate, fellow Baton Rouge native Clyde Edwards-Helaire, ranks seventh in the conference with five scores on the ground, and he’s averaging 86 yards per game in the Tigers’ last three matchups.

Despite the move to a more spread out offensive attack, LSU is still focused on establishing the run.

“We’re different as far as the type of runs,” Orgeron said. “We run more of a spread set. But we’re always going to be physical at LSU. That’s in our DNA.”

The Tigers are 14-0 under Orgeron when getting a 100-yard rusher, but the Bulldogs have yet to allow a back to rush for more than 79 yards all year.

“They’re so good at their coverage, it makes it hard to get guys open,” Orgeron said. “Kirby mixes his coverages. He plays two-high (safeties) on first down. A team that can stop the run and play two-high is a great football team.”

Finding holes in that coverage will be the primary job for quarterback Joe Burrow, who last week set a school record for most consecutive passes without an interception (158) before tossing two late picks against the Gators.

“He didn’t skip a rep this week,” Orgeron said. “He was very sore on Monday but didn’t say a word. He took every rep. He’s healthy, and he’s ready to go. A little angry, probably. A little angry at himself. Knew he could play better. So could the whole team.”

At receiver, Justin Jefferson ranks 10th in the SEC with 345 yards. He and freshman Ja’Marr Chase share the team lead with two touchdown receptions.

On defense, the Tigers rank second in the league with eight interceptions, led by three from sophomore safety Grant Delpit. Their task Saturday will be to slow down a Bulldog offense averaging 42 points per game and featuring two elite quarterbacks: sophomore Jake Fromm and freshman Justin Fields. Each brings a different style to the table.

“With Fromm, they’re coming right at you, play action, pro-style,” Orgeron said. “With Justin, more quarterback reads, more of a quarterback that will scramble out of the pocket, more option plays. Not that Fromm can’t run it. You have to be prepared for both. They’re different. There’s a different game plan for each.”

The Bulldogs also feature dynamic running back Isaiah Swift and wide out Mecole Hardman, both of whom can make plays with the ball in their hands. Swift reminds Orgeron of a former Tiger back with rare size-speed combo.

“He reminds me of Guice in a lot of ways,” Orgeron said. “He’s 5-9, 215. He runs inside…He can change direction east and west just like that and he can run you right over. And can catch the ball. And plus he has a lot of backup. He can stay fresh. Those guys come in, you just can’t tell the difference. It looks like they have about five or six backs that can play in the NFL. Very, very impressive.”

The second-ranked Bulldogs will put Orgeron’s unblemished record following defeats at LSU to the test, but a win would put the Tigers back in the driver’s seat for their conference title and College Football Playoff hopes.

“I think we got their attention,” Orgeron said. “We let our hands down. We should have won that football game (at Florida). We had a chance to win that game…The team is hungry. This is going to be a tremendous challenge for us, but we can’t hang on to this for a long time. Georgia’s got our attention. It will be a tremendous challenge for us. I’m glad we have them at home.”