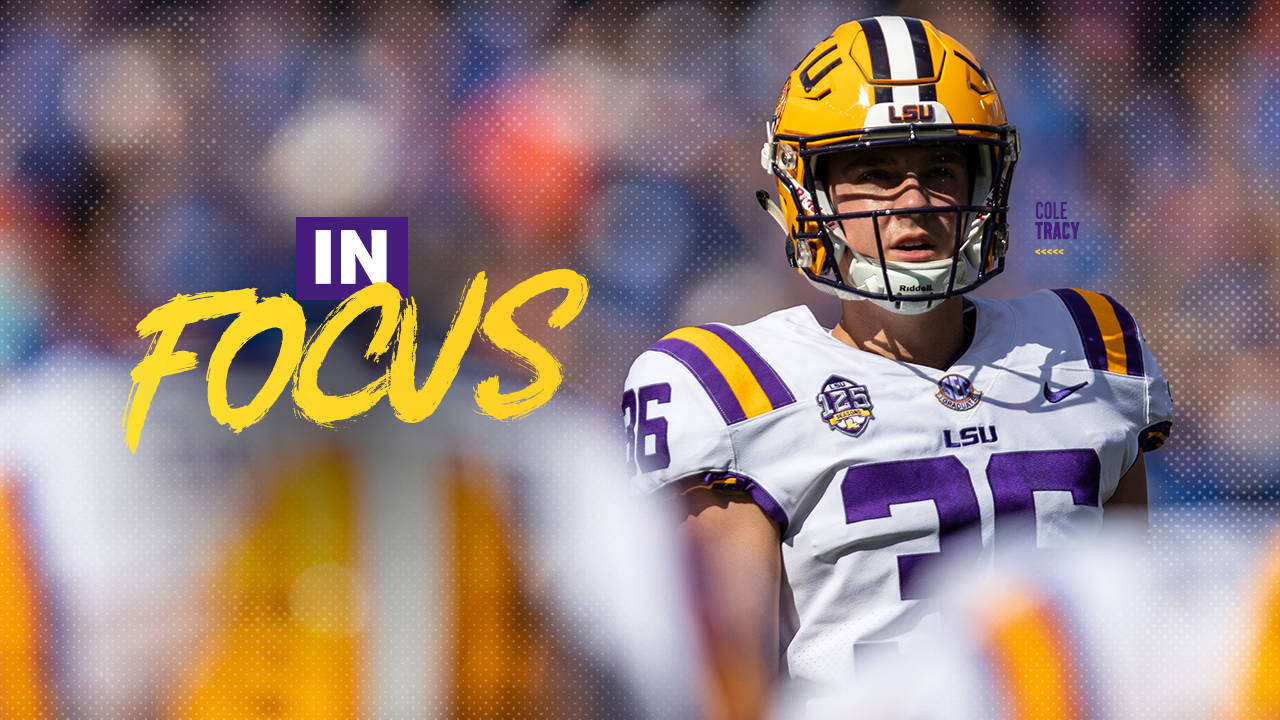 Cole Tracy came trotting out for a field goal at Auburn, and his sister, Lauren, was sweating bullets. She watched on with friends and family from their California home in Camarillo, just outside of Los Angeles.

After starting out his LSU kicking career five-for-five, including a LSU record-tying 54-yarder in Week 1 against Miami, Tracy missed his first kick as a Tiger in the first quarter against Auburn.

Lauren was unsure of how her brother would respond, and as he came back out in the second quarter for a 33-yard field goal attempt, she says, “That was the most nervous I’ve ever been. It is the ability to come back which makes you.”

He drilled it to split the uprights, putting No. 12 LSU ahead of seventh-ranked Auburn, 10-0.

After Auburn put up 21 unanswered points, it was Cole’s 27-yarder to cap off a 13-play LSU drive in the third quarter that put the Tigers back in gear. Joe Burrow found Derrick Dillon for a 71-yard TD strike to keep LSU moving in the right direction, but a failed 2-point conversion left the Tigers still trailing Auburn 21-19. LSU got the ball back with 5:38 left to play, driving towards the North end zone.

Back in California, Lauren and her parents, Kent and Pam, had a feeling that the battle of Tigers could come down to a kick from Cole.

Cole arrived to Baton Rouge from California by way of Worcester, Mass. After redshirting his freshman year at DII Assumption College in Worcester, Tracy set seven school records and went 68-of-84 over the next three years, winning the Fred Mitchell Award in 2017, which goes to the top DII, DIII, FCS, NAIA or NJCAA kicker in the nation.

Faced with a similar situation as a freshman at Assumption, right as the offense took control on the final drive, Cole may have immediately gone to his “work bench,” which is what he calls his kicking net. It’s a term he borrowed after building a relationship with Pro Football Hall of Famer Morten Anderson, who calls his net the same thing. As Cole has matured, so too has his routine.

“You have to be able to feel if the drive is starting to progress and starting to catch steam,” explained Tracy.

With Burrow leading the offense, the Tigers’ comeback drive did begin to catch steam. After picking up the initial first down of the drive on a pass interference call drawn by Jonathan Giles, Burrow found Dee Anderson on a third down with an eight-yard out route to keep the sticks moving.

His sister describes Cole as a care-free, go with the flow kind of guy, but when it comes to kicking, it’s his world.

“He literally loves to kick,” his mom echoed. “That became his spotlight and he embraced it.”

When Cole realized the game might come down to one of his kicks, the first thing he could do was laugh and joke with his teammates on the sideline. After all, they had been discussing the chance of this the entire game. All of a sudden, the situation was right before their eyes.

On fourth-and-seven from Auburn’s 48-yard line with 2:08 remaining, Burrow launched a bullet into the gut of Stephen Sullivan, running across the middle, who fell to the ground with a first down after a nine-yard reception.

It’s going to come down to Cole.

“We all felt like that was going to happen in a weird sort of way,” his mom remembers.

Cole’s attitude quickly changed from having a good time on the sideline to focusing on the task at hand – winning the football game for LSU – as he made his way over to his work bench.

Coach Bob Chesney gave Cole and his family the feeling that he would be treated as more than a kicker in Worcester and would be given the opportunity to excel. His time in the Northeast allowed him to perfect his craft and work on that routine.

When larger schools started calling after he graduated from Assumption, one of the reasons he was drawn to LSU was what drew him to Assumption. He felt that instead of just being a kicker, he could come down to Baton Rouge and really feel a part of the team.

After one final first down at Auburn, again on a pass interference call, the moment was set. Two seconds left. All eyes on Cole Tracy.

Without a perfect snap and a perfect hold though, the kick wouldn’t be possible. Tracy trusted the snapper, Blake Ferguson, who is considered one of the top long snappers in the nation. He trusted LSU punter Josh Growden on the hold. The two have been working together since Tracy’s second day on campus over the summer. All Cole had to worry about was focusing on his job.

For the same reason Tracy eats lunch in Tiger Stadium every day, he watched hours of film of Jordan-Hare Stadium and bombarded LSU kickoff specialist and Auburn native Avery Atkins with questions about what the look and feel of the stadium. Tracy is detailed to the inch, so when it came to kicking a game-winner to the South goalposts, he had already played it out in his head exactly as it would be.

The nerves that unsetttled the family after the first miss were a distant memory.

“I didn’t have any doubt he would make that kick,” his dad said. “I was looking forward to it.”

As Ferguson fired the ball between his legs and Growden found the perfect spot for the hold on the 32-yard line, Cole’s family watched with a house full of friends back in California.

The kick split the uprights. Cole sprinted in celebration and got mobbed by his teammates and eventually was carried off the field on their shoulders.

“I kind of didn’t really think that everything was happening to be honest,” Cole recalls. “I remember running and my body took over.”

Cole talked to LSU trainer Jack Marucci in the locker room after the game and remembers him saying, “That was the best game I’ve ever been a part of.” Cole was struck then by the magnitude of the moment.

He was the centerpiece of an instant classic in the long history of a great rivalry.