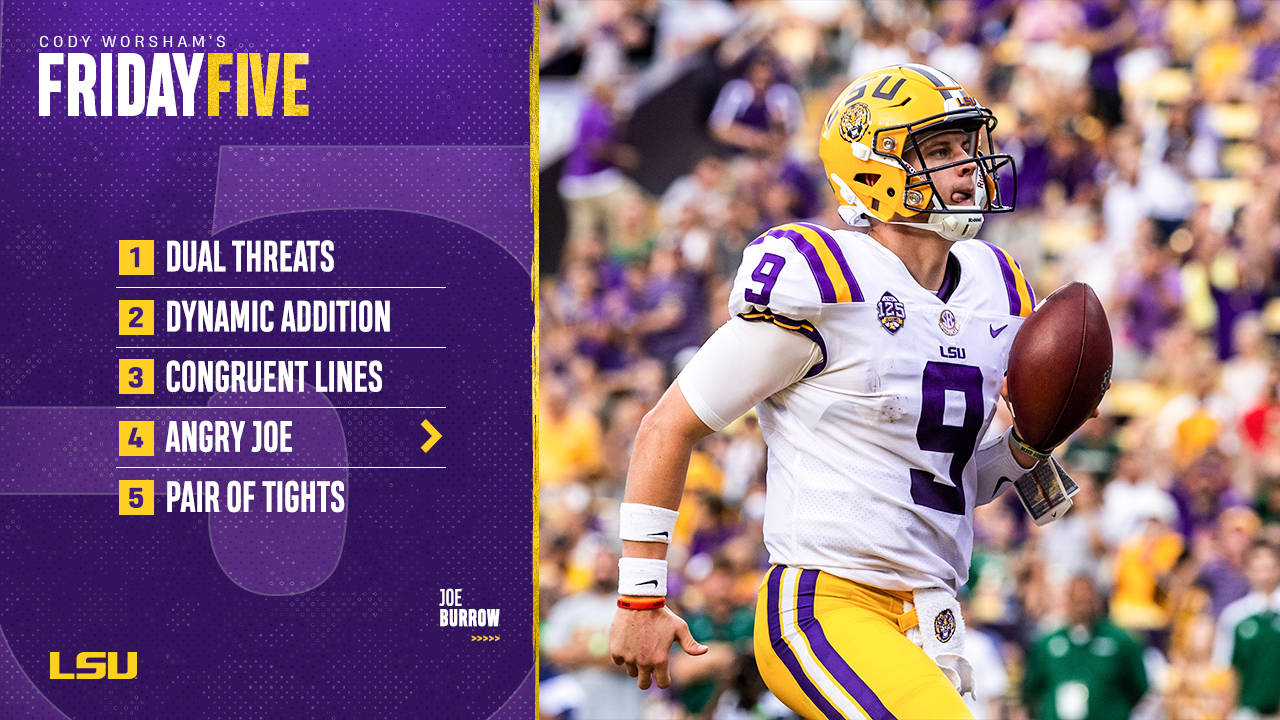 Georgia’s offense could very well be the best LSU has faced all season. The Bulldogs rank 15th nationally and second in the SEC with 42.8 points per game, and quarterback Jake Fromm’s 192.5 passer rating is the second-best in the league.

But Fromm isn’t the only weapon the Bulldogs will deploy under center. Freshman Justin Fields has completed 18-of-25 passes for 200 yards and two scores, while adding another 133 yards and three scores on the ground. He averages just under 20 snaps per game and offers a different challenge from Fromm.

“With Fromm, they’re coming right at you, play action, pro-style,” Orgeron said. “With Justin, more quarterback reads, more of a quarterback that will scramble out of the pocket, more option plays. Not that Fromm can’t run it. You have to be prepared for both. They’re different. There’s a different game plan for each.”

Georgia’s defense offers a similar challenge to the LSU offense. The Bulldogs allow just 13.0 points per game, second in the league, and rank third in both rushing and passing defense.

The key to their success: the ability to stop the run without stuffing the box.

“They’re so good at their coverage, it makes it hard to get guys open,” Orgeron said. “Kirby mixes his coverages. He plays two-high (safeties) on first down. A team that can stop the run and play two-high is a great football team.”

That means LSU will need its receivers to find those gaps in the Georgia secondary, slim as they may be. Orgeron said the Tigers will be without Dee Anderson, LSU’s third-leading receiver at 154 yards, which means other players will need to step up – including, perhaps, a new addition to the room.

“Stephen (Sullivan) can play like him. Justin Jefferson will get more plays. And we moved Jontre Kirklin (from defensive back) to receiver. Hopefully we can get him in there in certain situations. He’s not fully ready yet, but he sure looked dynamic in practice today.”

His emergence as a chain-mover over the last couple of games has been key. pic.twitter.com/mNm4FpPLzB

One pleasant change for the Tigers against Georgia will be a lack of changes up front.

If that five starts again, it will be the first time LSU has used the same offensive line in back-to-back weeks all season. Continuity should be, but the unit will also need to improve after Florida picked up five sacks and 11 tackles for loss a week ago.

“The guys are happy they all stayed in the same position,” Orgeron said.”But, again, there’s going to be a huge challenge. Just because it’s one week doesn’t mean they’re 100 percent. But hopefully we’re better than we were last week, because we weren’t very good, at some points, last week.”

Joe Burrow is not happy. He is, however, healthy.

On Monday, Burrow was battered and bruised after a physical contest in the Swamp. But he practiced all week and is ready to make amends for a two-interception outing against the Gators.

“He didn’t skip a rep this week,” Orgeron said. “He was very sore on Monday but didn’t say a word. He took every rep. He’s healthy, and he’s ready to go. A little angry, probably. A little angry at himself. Knew he could play better. So could the whole team.”

Here’s the good news: Georgia isn’t known for generating much pressure, and Burrow has been outstanding when kept clean this year.

Georgia ranks 12th in the SEC in pressure percentage.

Will be one of the biggest factors Saturday.

One player to keep an eye on for LSU Saturday is tight end Thaddeus Moss. The North Carolina State transfer has not played all season while recovering from an injury, but there’s a chance he could see action against Georgia.

Moss would be a welcome addition to a thin position group. The lack of depth at the spot has meant Foster Moreau has been the only real tight end to see action this year, while receiver Racey McMath has acted as a moving tight end in special situations for offensive coordinator Steve Ensminger.

“If we go 11 personnel, which is one tight end, we would go with Foster,” Orgeron said. “If we go 12 personnel, that would be (Moss) in certain situations. Steve loves the 12 personnel grouping, and we haven’t done it a lot, because we don’t have a second tight end. That’s the reason we moved Racey McMath there. We know Racey is more of a receiver. He’s not an in-line tight blocker. We feel that Thaddeus can do that when he’s healthy.”