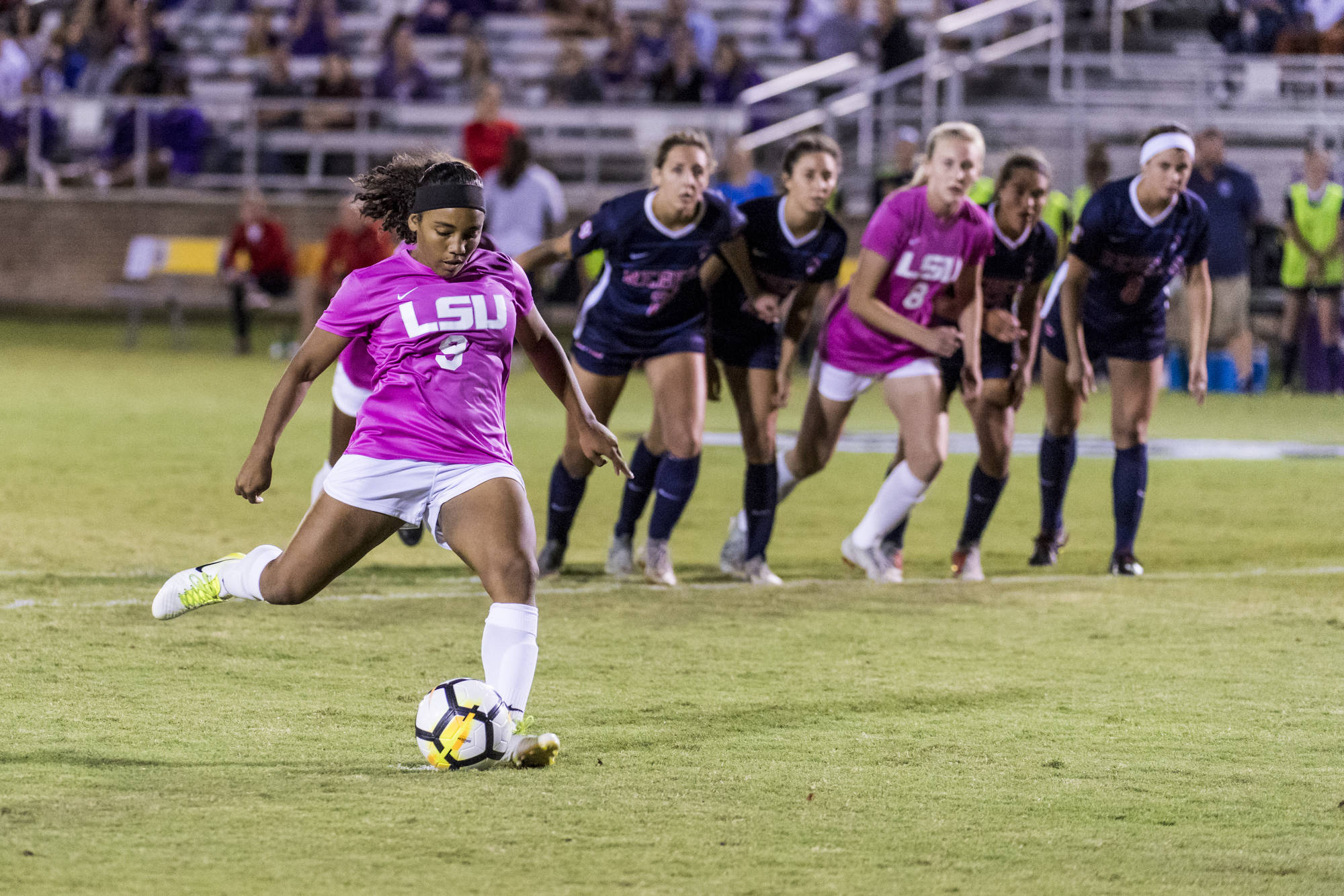 Baton Rouge, La. – The LSU soccer team won its second-straight SEC match on Thursday night at the LSU Soccer Stadium as it claimed a 3-1 victory over Ole Miss. Trailing by one after 45 minutes of play, the Tigers stormed back with three goals in the second half courtesy of a penalty kick by Alex Thomas (47th minute) and then goals by Lindsey Eaton (75th minute) and Abbey Newton (77th minute) just two minutes apart finished the scoring effort.  With the win, the Tigers improve to 9-5-1 overall and 3-3-1 in the SEC.  The Rebels fall to 9-6-1 overall and 3-3-1 in conference with the loss.

“It felt amazing. Playing at home is the best feeling. Our bench is crazy. Our fans are crazy. It’s a great feeling to be able to make everybody proud.”

“It was a great night. We were able to relax a little bit at halftime. We talked about a few things. The second half was really dominant and it was some of our best play all year.”

In the 11th minute Cece Kizer sent in a cross to Channing Foster. Foster was bodied up by Chiara Ritchie-Williams, but she was able to distance herself enough to get off a left-footed shot from about 14 yards out that squeaked inside the far right post to give Ole Miss the lead.

Entering halftime trailing for only the second time all season, LSU needed to make something happen after a couple of near goals didn’t go in in the first 45 minutes of play. Right out of the gate the Tigers put the pressure on the Rebels. Less than two minutes into the second half, Reese Moffatt serviced in a ball to a streaking Alex Thomas, who gained possession on the left side of the box (about 18 yards out). Immediately after gaining possession Thomas was bumped in the back by the Rebels’ freshman keeper, Morgan McAslan. Thomas went down and penalty kick was awarded. Thomas capitalized and netted the equalizer at the 46:16 mark of the game. It was Thomas’ third goal of the season and all three have now come via a penalty kick.

Lindsey Eaton‘s second goal of the season came via some good ole fashioned hustle in the 75th minute of play. Tiana Caffey played the original ball into the right side of the box where Alex Thomas won the header. Thomas’ header was a pass to Eaton, who found herself behind the Rebels’ backline. Eaton’s initial shot beat McAslan to her right, but it was just a bit too wide and hit the post. Fortunately, Eaton stayed on her toes, fought through a bit of contact with the Ole Miss keeper and followed the deflection off the post to net the goal with her left foot. The goal gave LSU a 2-1 lead.

For the third time this season freshman Abbey Newton and junior Marlena Cutura were on the same wavelength on a corner kick. Cutura’s right-footed service into the box on LSU’s eighth and final corner kick of the evening found the forehead of Newton on the back side of the six and the freshman knocked it in the 77th minute of play. It was the fourth goal of Newton’s season, which now ranks as the second most on the team. For Cutura, it was the fourth assist of her season, a number that is a career high. It was the third time this season that the two have combined for a goal off a corner kick.

Senior goalkeeper Caroline Brockmeier came up with three big saves on the evening, but two of them especially standout. In the 84th minute with LSU leading 3-1, Brockmeier was tasked with shutting down one of the top scorers in the SEC in Cece Kizer. A penalty kick was awarded to Ole Miss due to an LSU handball in the box. Brockmeier stepped right in and confidently leaped to her left as Kizer began to strike the ball and she was all over the shot. She pushed it away with two hands to preserve LSU’s two-goal lead.

Maybe more important was Brockmeier’s save on Kizer in the 29th minute with LSU already trailing by one. Kizer intercepted a pass and dodged an LSU defender before finding herself in a near one on one situation with Brockmeier. Lucy Parker hustled back on the play and cut Kizer’s angle down and forced her to shoot before she would have liked to and Brockmeier squared up the shot that Kizer sent in from 19 yards out. The save held the deficit at one for the time being.

LSU will hit the road and head to Knoxville, Tenn., for its next conference match. The Tigers will take on the Vols next Thursday (Oct. 18) at 6 p.m. CT.