The Truth: Capitalizing on Chances Critical for Tigers 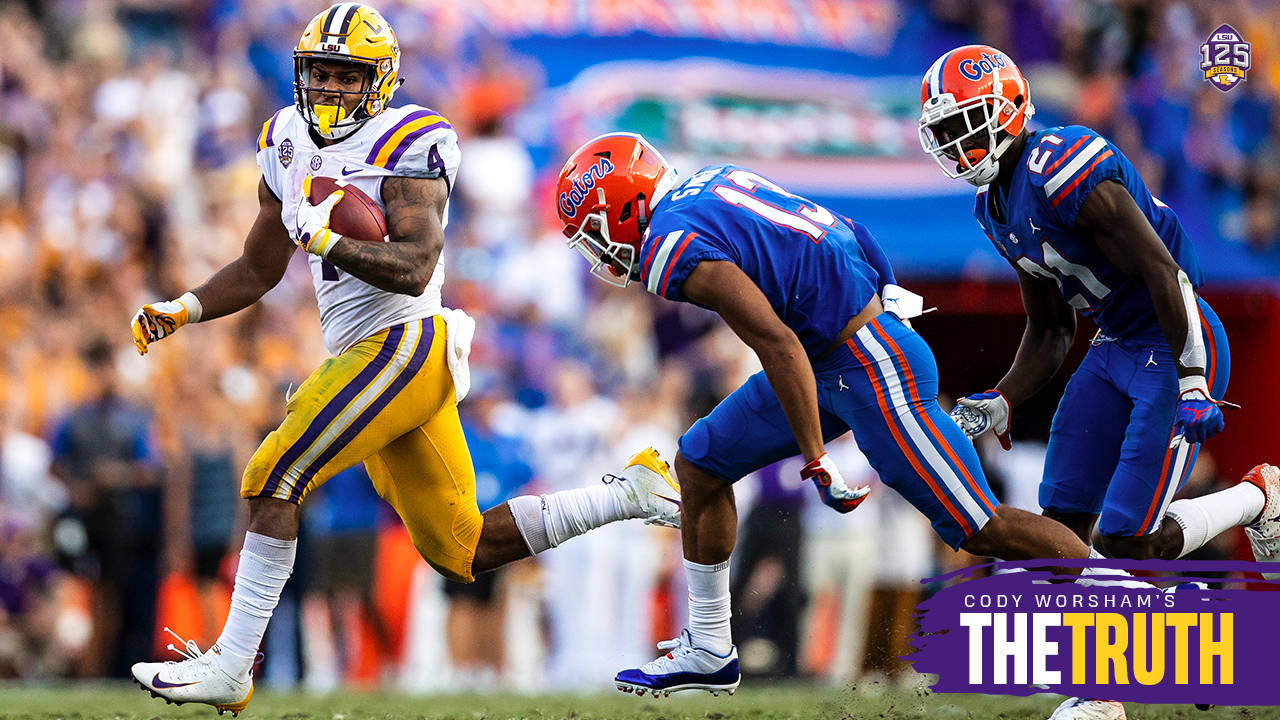 Joe Burrow walked into Monday’s team meeting on black-and-blue ankles with two thoughts – one good, and one bad.

In a tightly-contested 27-19 loss at Florida over the weekend, the Tigers lost a neck-and-neck game on the margins.

The box score shows as much: LSU’s 371 yards were short of Florida’s total by just 20. The Tigers overthrew the Gators (191-176) and were just five yards off their rushing total (210 to 215) after adjusting for sacks.

“I thought we fought hard the whole game,” head coach Ed Orgeron said. “There was never a time we felt we couldn’t win the game. We made a lot of mistakes. We felt we beat ourselves in a lot of areas.”

Ahead of a 2:30 clash with No. 2 Georgia on CBS this weekend, here’s what worked and what needs work for the Tigers.

The Tiger offense came screaming out the gates, going 75 yards in 10 plays to jump ahead 7-0.

The drive featured four passes – Joe Burrow hit on 3-of-4 for 58 yards – and six runs for 17 yards, including Nick Brossette’s four-yard touchdown run.

Two plays that stood out were the result of tempo, and both produced big gains for Brossette.

The first was a simple swing pass to the left that Brossette took to the edge and cut upfield for 13 yards. After getting stuffed for a loss, the Tiger offense rushed to the line and caught Florida flat-footed, leading to the pickup.

The second came after Burrow converted a 3rd and 7 to Dee Anderson. A quick handoff to Brossette again caught the Gators unawares, resulting in six for the Tigers.

Something Ed Orgeron said he liked from the Florida game was the first offensive drive. Tigers used tempo well twice for a big gain and a touchdown. pic.twitter.com/Lx1WLnHQCF

“There were some positives,” Orgeron said. “First of all, the fast start.  I thought it was a great opening drive, a great plan.”

Inside of 10 yards, Burrow was automatic Saturday. Before the pick-six in the fourth quarter, he was 17-of-17 for 118 yards.

Beyond that, though, Burrow was 3-of-13 on throws beyond 10 yards with an interception and two drops for the game.

That lone completion was Burrow’s best deep ball of the game. On his first throw, he play faked and fired a strike to Justin Jefferson down the right sideline.

Note the play action above: Burrow was 7-of-9 for 88 yards when he play faked against the Gators, and he has an NFL passer rating of 117.3 on play action this season.

That same throw was available at least three more times to LSU, but twice Burrow overshot Jefferson, and once Jefferson failed to collect a catchable ball around a crowd of defenders.

Those sorts of plays win games when hit but prove costly when they don’t.

Much will be made of Florida’s 5-0 sack advantage, and it’s a number LSU will want to fix.

But the Tiger pass rush made a difference, too.

Michael Divinity led the way with six pressures, the most in the SEC this week. Credit to Feleipe Franks for finding ways to get rid of the ball, but the Tigers did get to him enough to do damage.

One obvious one came on Grant Delpit’s interception. Breiden Fehoko’s pressure up the middle forced Franks into an ill-advised throw, and Delpit hauled in the easy pick.

Grant Delpit said his interception against Florida was the second-easiest opportunity of his career, thanks to pressure from Breiden Fehoko. The first: he dropped it against Miami in week one.

Also says his celebration was a nod to Kodak Black. pic.twitter.com/vfu5k8WCWs

“He gave me a gift,” Delpit said of Fehoko. “I’ll take all the gifts in the world.”

Divinity came into life in the second half, getting to Franks on consecutive plays to force one of five three-and-outs on the game. His speed off the edge was vital. He simply beat the Gator tackles to the spot.

Some clips of Michael Divinity rushing the passer. Had six pressure, the most by an Tiger all season. Said today he’s got to convert them into sacks. pic.twitter.com/4O63oHCI3k

“We did get close to the quarterback, made him throw incomplete passes,” Divinity said. “But we have to get sacks.”

“We didn’t have the sacks that we wanted, but we had some pressure,” Orgeron added. “It wasn’t good enough.”

For the sixth straight game, LSU had a new offensive line set up, with Adrian Magee sliding in at left guard and Saahdiq Charles returning to left tackle.

The results were mixed. The Tigers had some success on the ground, particularly on a 4-play, 80-yard scoring drive in the fourth quarter that saw Nick Brossette break off runs of 47 and 31.

But protecting Burrow proved challenging again. When he had time, as usual, Burrow was good. He’s been accurate on 75% of his passes with an NFL passer rating of 105.0 when kept clean this year, but those numbers drop to 55.6% accuracy and a 35.1 passer rating under pressure.

One of the most pivotal plays was a first quarter sack fumble. Up 7-0 with the ball, LSU was driving with a chance to go up 14-0 when Burrow was blindsided and fumbled. It was a simple technique issue Orgeron thinks is correctible heading into Saturday’s matchup with Georgia.

“We’re opening our shoulders and creating a short corner,” Orgeron said. “We have to kick slide to the inside at a 45 degree angle. We’re not doing that well enough. It’s all technical stuff. The speed at which Florida hit us hurt us. We have to match that speed in practice.”

It also underlined another issue: turnovers. After going four games without a turnover to start the season, LSU lost the takeaway battle 3-1, with Burrow also throwing a late pick-six that Orgeron just called “a bad throw.”

Turnovers have been a strength for the Tigers – they tied an NCAA record last year with just eight all year – and they’ll be a focus this week in practice.

“It takes 11 to protect the ball,” Orgeron said. “It starts with pass protection. That first sack fumble was devastating to our team. We could’ve gone up 14-0. That sack fumble got their crowd back in the game. It’s coming from Joe’s back side. He never saw it. That’s something we have to avoid by protection.”

6: Micah Baskerville had six run stops in his first start as a Tiger. That’s the seocnd-most by any Tiger in a single game all season (Devin White vs. SELU, 7).

114: Nick Brossette and Clyde Edwards-Helaire combined for 114 yards after contact vs. Florida.

193.4: Edwards-Helaire’s “Elusive Rating” (a measurement of broken tackles and yards after contact), the highest in the SEC in Week 6 among backs with at least 7 carries.

130: Number of yards LSU rushed for on its left side vs. Florida, compared to 63 on its right.

0: Receptions allowed by Kristian Fulton against Florida on five targets.

364: Yards after contact for Nick Brossette through six games.

Nick Brossette has more yards after contact this year (364) in six games than he had total rushing yards his first three seasons (306).