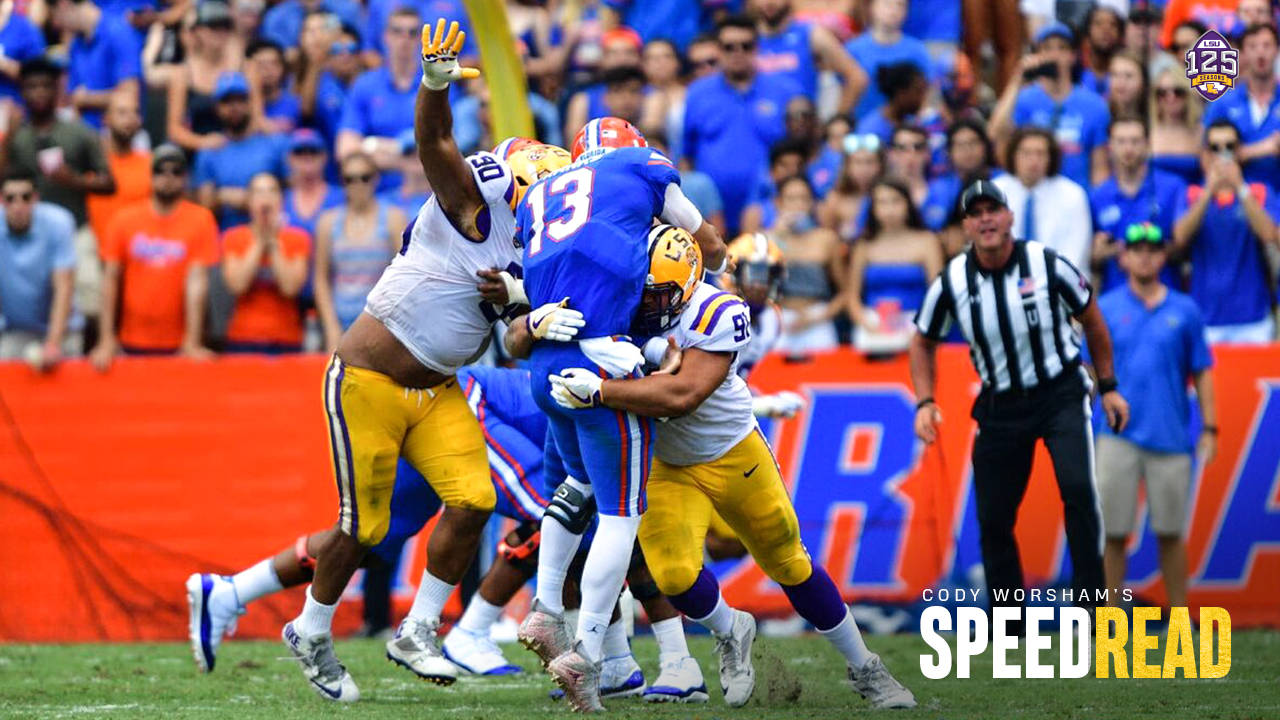 GAINESVILLE, Fla. — Finger pointing often pops up after difficult losses. It did on Saturday for LSU, after a tough 27-19 defeat in Gainesville.

Only for the Tigers (5-1, 2-1 SEC), the fingers were pointing right back at the person doing the pointing. From head coach Ed Orgeron on down to his players, everyone was taking blame and refusing to dole it out.

“Put it on me,” Orgeron said. “It’s always going to be my fault. Give them the credit when we win. When we lose, it’s always my fault. I’m the boss. I’ve got to get them better, and that’s it.”

Orgeron’s players pride themselves on being good listeners, but they weren’t letting their coach get away with the burden of the blame.

“It’s not on him, because he’s not out there playing,” said linebacker Devin White, who finished with 9 tackles, including 1.5 for loss. “We had a great game plan. It’s on us, because we didn’t execute it. I’ll never let Coach put it on him when we’re the ones out there playing. They spend countless hours putting everything together. All we have to do is go out there and execute it.”

Win or lose I Wouldn’t trade this team, or should i say “family” for anyone else. LSU till the end.

“I felt like at times we let up as players,” he said. “It wasn’t the coaching. It was on us, guys like myself bearing down and taking leadership. I’ve got to take leadership in those tough times. I felt like we were the better team out there, but the scoreboard just didn’t show it.”

Immediately after LSU’s 27-19 loss at Florida on Saturday, Fehoko had selected his postgame flight entertainment options.

The team plane features a host of on-demand movies and satellite channels, but Fehoko’s viewership would go straight to his iPad.

“We have another big game next week, but we’re not going to forget about this one,” Fehoko said. “We’re going to start watching film on the plane and fix it.”

A starting point for those fixes: generating more negative plays on defense and fewer on offense. In a game that finished relatively even in the box scores, one stat stands out most: Florida’s five sacks and 11 tackles for loss compared to LSU’s zero sacks and two tackles for loss.

“We could’ve created more negative plays tonight,” said Fehoko, whose third-quarter pressure of Florida quarterback Feliepe Franks forced an errant throw into the arms of safety Grant Delpit. “We had the opportunities to. We missed some tackles.”

The Tigers also turned the ball over twice, and both proved costly. The first came on the Tigers’ second drive. Up 7-0 and with momentum firmly in their camp after Clyde Edwards-Helaire‘s pile-pushing 16 yard run, quarterback Joe Burrow took a backside hit and fumbled for the second straight week.

“It was a blindside,” head coach Ed Orgeron said. “I wish he’d have tucked the ball away. We had a chance to go up 14-0 right there. It was huge, a huge turnover, especially a first down pass.”

In total, LSU lost 70 yards on sacks and tackles for loss, while Florida lost just two yards on such plays. Michael Divinity led the pass rush with three hurries, all of which came in the second half.

It was the pass protection on LSU’s side that struggled most, though.

The Tigers rolled out their sixth starting offensive line combination in as many games. Adrian Magee stepped in at left guard, where senior Garrett Brumfield remains sidelined with an injury. Saahdiq Charles returned to left tackle after a two-game absence.

“The O line, we’ve got to get better,” said center Lloyd Cushenberry. “They got to the quarterback a lot, and that’s on us. It’s all five. We had ups and downs. We did good, then we took a little dip. We’ll be back.”

Orgeron said he started chipping with backs and tight ends when he could, but the issue was too many players losing one-on-one matchups.

“We couldn’t drop back and throw the football,” Orgeron said. “Our guys were getting beat one-on-one. You can only chip one or two guys. You can’t chip all five. We’ve got to get better pass protection. I’ve said that all year.”

Burrow also said he might’ve held on to the ball too long on a couple of plays, but his teammates said the entire offense is accountable for the mistakes.

“We just gotta keep being us,” added tight end Foster Moreau. “We’ve got to fight, win our one on ones. We lost a few one on ones tonight. And the negative plays.”

Burrow broke an LSU record for consecutive passes without an interception in the first half, but his first pick as a Tiger came late in the fourth quarter. On third down deep in Florida territory and the Tigers down one, Florida safety Brad Stewart stepped in front of an out route and housed it, all but sealing the win for the Gators.

It was a risky throw, one that Burrow saw unfold and just couldn’t quite find the window.

“I saw him,” Burrow said. “It was man to man. He made a great play. He was sitting flat-footed and made a good play.”

On the other side of the ball, Delpit pulled down his third interception of the season, picking off Franks’ wayward toss after Fehoko slammed the Gator quarterback into the turf.

The turnover came at a critical time for the Tiger defense. Trailing 14-10 on the first drive of the second half, Dave Aranda‘s unit gave up a deep throw down the sideline and added 15 yards to the gain with a personal foul, putting Florida in the red zone in a single play.

But Fehoko and Delpit delivered and got the Tigers out of a dangerous corner.

“He’s a smart player,” Orgeron said of Delpit. “He was playing the post, and he made a play on the ball.”

Nick Brossette had another big game on the ground for LSU. The senior went for 95 yards and two scores on 15 carries.

His best work came on two drives, both of which he finished with touchdowns. The first was the Tigers’ initial series, when he took a swing pass 15 yards and plowed in for six from four yards out.

His breakout, however, came on the Tigers’ final scoring drive, when he broke free for gains of 47 and 31 to set up a one-yard score.

“The line did a great job on that drive,” Burrow said, “and Nick ran the ball hard all game.”

One play Florida found success with was the speed option to the boundary. Franks and Florida’s backs broke off several key runs on that play, and Franks also used his legs to convert a vital third down on the Gators’ final scoring drive.

“Our pass rush lanes wasn’t what it was at the beginning of the game,” Orgeron said. “Then they started checking to the speed option. We have up too many explosive plays.”

White said he remembered Florida head coach Dan Mullen running those options at Mississippi State last year, but they’d not seen the Gators run them much on film.

“We haven’t seen it much from them,” he said. “I knew it was in there. The way the scheme was, they had us outleveraged. That’s why it hit really big.”