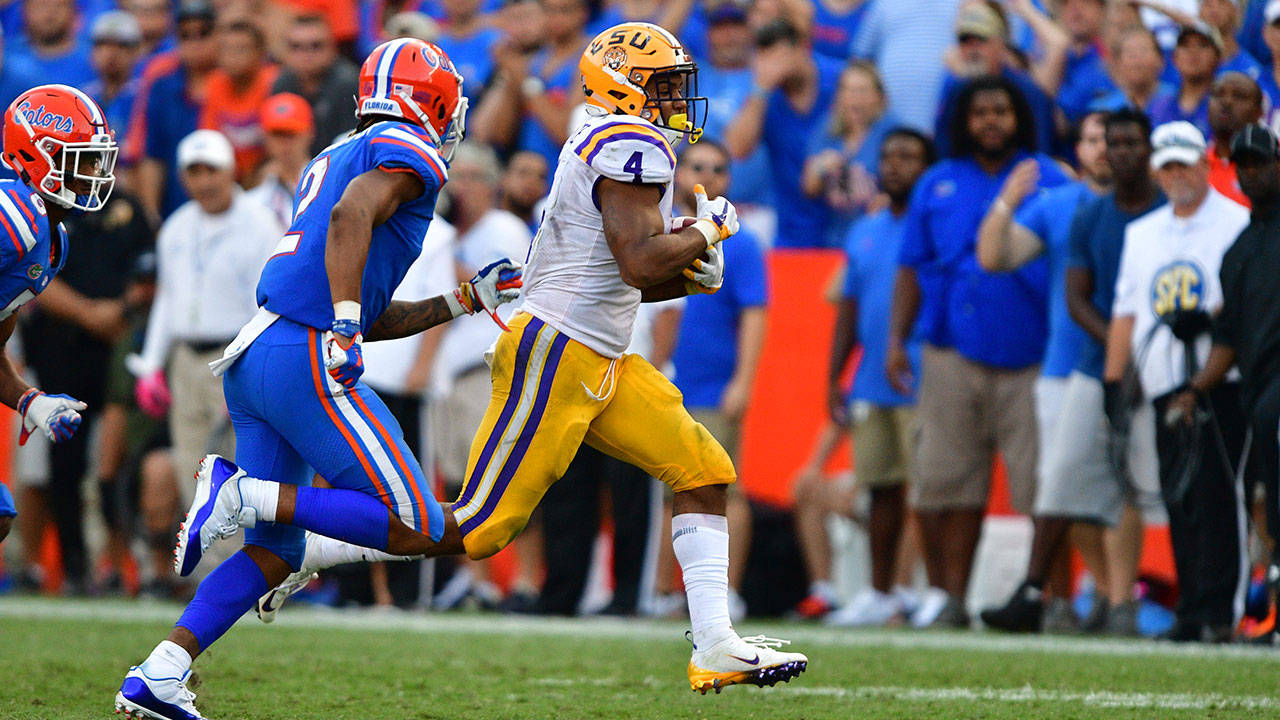 GAINESVILLE, Fla. — In a back-and-forth game in The Swamp, No. 22 Florida scored with eight minutes remaining and held off the fifth-ranked Tigers, 27-19, on Saturday.

LSU (5-1, 2-1 SEC) suffered its first defeat of the 2018 season while facing three ranked teams away from Tiger Stadium in its first six games. Florida improved to 5-1 overall and 4-1 in SEC play.

With 11:14 remaining, LSU took a 19-14 lead after running back Nick Brossette‘s second touchdown of the game. However, the Tigers two-point attempt was batted away and Florida answered with a nine-play, 75-yard drive to take earn a 20-19 lead.

Florida earned the final margin with 1:45 to play when Burrow threw his first interception in 160 pass attempts as a Tiger. Florida’s Brad Stewart Jr. returned it 25 yards for a touchdown.

Burrow was 19-of-34 passing for 192 yards. He was sacked five times for minus-30 yards, but finished with 22 net rushing yards. Derrick Dillon had a team-high four catches for 42 yards, while Justin Jefferson added three catches for 51 yards.

In a statistically-even contest, Florida outgained LSU, 391-372. LSU had three turnovers while Florida had one.

LSU returns home to start a three-game homestand, beginning Saturday with a 2:30 p.m. CT kickoff against No. 2 Georgia. The game will be televised by CBS and broadcast on the LSU Sports Radio Network beginning at 12:30 p.m.

Florida won the coin toss, deferred its decision until the second half, and LSU took over at its 25 following a touchback on the opening kickoff.

Burrow connected with Jefferson deep down the right sideline for 38 yards on the game’s first play to enter Florida territory at the 37. After a 13-yard catch and run by Brossette, the running back picked up another first down with a 1-yard run to the 15. On third-and-6 from the 11, Burrow fired a perfect strike to Dee Anderson at the Florida 4, and Brossette scored up the middle on the next play.

Following Cole Tracy‘s PAT, LSU took a 7-0 lead with 11:43 to play in the opening quarter.

Florida managed only five plays and one first downs on the ensuing drive, and LSU took over at the 24 after a 36-yard punt.

LSU again marched into Florida territory with an 11-yard reception by Stephen Sullivan, a face mask penalty, and a 16-yard run by Edwards-Helaire to the Florida 28. However, Burrow was sacked and stripped by Florida defensive tackle Kyree Campbell to end the threat.

Through the Gators were held to consecutive three-and-out series, a pair of Florida punts inside the 20-yard line slowed LSU’s offense.

Meanwhile, Florida took over at the LSU 43 following a short punt by Zach Von Rosenberg from the back of his end zone. The Gators finished off a nine-play drive with a 1-yard run on third-and-goal by Lamical Perine.

The Tigers moved into Florida territory at the 42 with a 15-yard screen pass to Brossette on third-and-17, but elected to punt.

Following a four-play drive by the Gators, LSU took over at its 22 and continued to find success. Runs of 12 and five yards run by Edwards-Helaire each went for first downs before Burrow took a bootleg on third-and-1 for 21 yards to the Florida 24. When Edwards-Helaire’s third-and-2 run came up a yard short, the Tigers elected to kick a 33-yard field goal. Tracy’s try was successful and LSU took a 10-7 lead 3:10 left in the half.

Florida put together its most successful drive of the afternoon, using a 23-yard run by Perine to cross midfield. On second-and-14 from the LSU 38, Franks connected with Josh Hammond for 35 yards to the LSU 3. A play-action pass to tight end Morel Stephens resulted in a touchdown in the back-left of the end zone.

Florida took a 14-10 lead into the lockerroom.

The first play of the second half went exactly wrong for the Tigers, as Franks completed a 49-yard pass to Hammond to the LSU 26 and tacked on 13 yards due to a personal foul at the line of scrimmage.

On the following play, heavy pressure up the middle by LSU nose tackle Breiden Fehoko forced Franks to throw early into the arms of LSU safety Grant Delpit in the end zone.

Later in the third quarter, a holding penalty brought back a 26-yard catch and run by tight end Foster Moreau that would have given LSU a first down at the Florida 32. Instead, the Tigers were forced to punt following a 12-yard scramble by Burrow third-and-21.

Although LSU wasn’t able to get points off the drive, a 49-yard punt by Von Rosenberg to the Florida 8 resulted in a three-and-out by the Gators. LSU found its best field position of the game at the Florida 44 after a 14-yard return by Jonathan Giles with 6:12 left in the quarter.

Under pressure, Burrow looked to Moreau who made a one-handed grab for 14 yards to the Florida 28. LSU’s third-and-10 pass to Dillon gained only four yards, and Tracy entered to kick a 42-yard field goal.

In a game of field position, punters Tommy Townsend of Florida and Von Rosenberg of LSU traded 70 and 61-yard punts as the third quarter ended in a one-point margin.

Florida started the fourth quarter at its 41 and advanced to the LSU 39 before punting when a third-down pass was ruled to be incomplete by video review.

With a touchback on the short Florida punt, LSU used Brossette for runs of 31 and 47 yards to the Florida 2-yard line. Following a Gators penalty, Brossette pounded the middle of the line for a 1-yard touchdown run and a 19-14 lead. Burrow’s pass aimed at Derrick Dillion was batted away with 11:14 left in the game.

Florida was able to answer the score with a nine-play, 75-yard drive that ended with a 2-yard touchdown run by Perine. Florida’s try for two points was also unsuccessful and the Gators led 20-19 with 8:48 remaining.

Though LSU couldn’t take advantage of a 13-yard run by Burrow and a pass interference penalty, Josh Growden‘s 41-yard punt pinned Florida at its 4 with 6:24 to play.

Attempting to use as much of the time remaining, Florida ran 6-straight times and picked up a pair of first downs. As the clock ticked under three minutes, LSU used two of its timeouts before Florida punted 61 yards and LSU took over at its 12.

On third-and-4 from his 18, Burrow threw his first interception as a Tiger and Florida’s Stewart returned it 25 yards for a touchdown. With the PAT, Florida led 27-19 with 1:45 to play.

LSU’s attempt to match the heroics ended when Burrow’s fourth-and-10 pass to Anderson was intercepted with 21 seconds remaining.