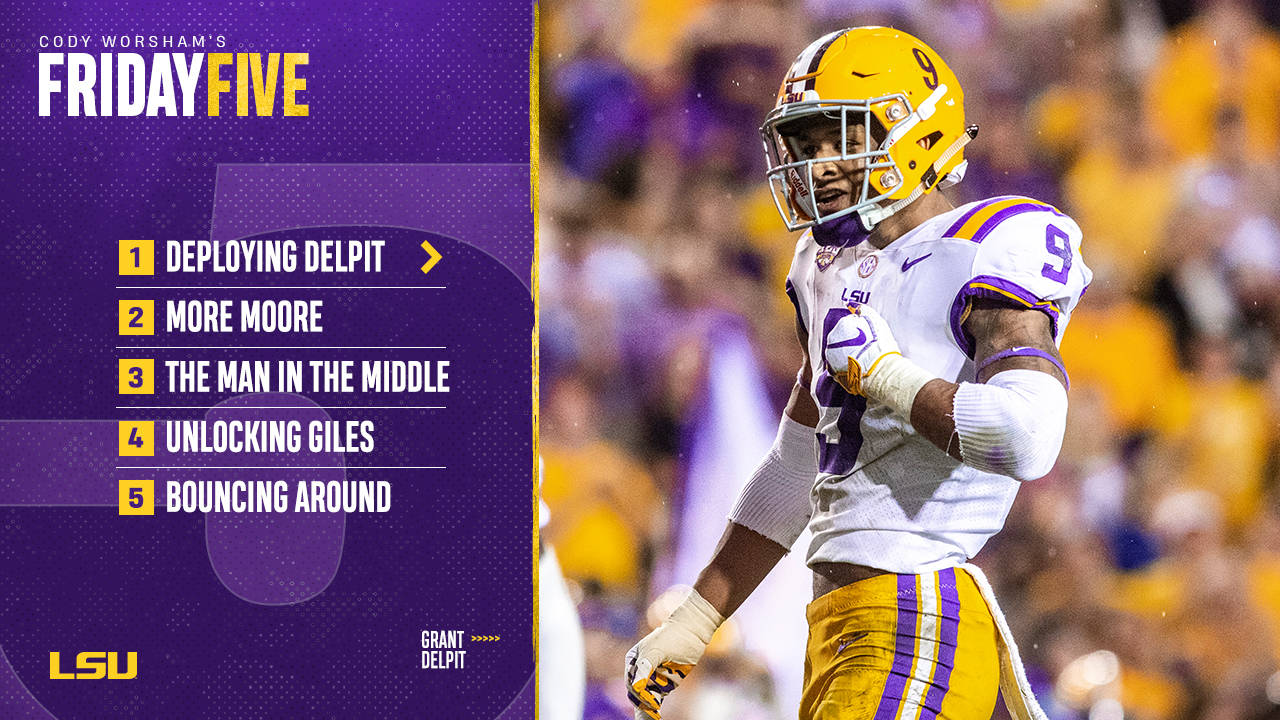 Finding Grant Delpit in LSU’s defense on any given play is no easy task.

Look, I know I tweet videos of Grant Delpit every week.

But he’s that good. This is three straight plays.

Is there an individual stat for forcing 3-and-outs? pic.twitter.com/OUeU4P3IcD

The sophomore safety simply can’t be defined by his position in 2018, as he’s lining up all over the field for the Tigers.

The only commonality? No matter where he’s playing, Delpit is dominating, with 27 tackles, 6.5 for loss, three sacks, and two interceptions.

“He can rush, cover, play man-to-man,” Ed Orgeron said earlier this season. “It’s like having three players. That’s how much he means to our defense.”

The reason he can move around so much, Orgeron says, is the expansion of LSU’s defense under coordinator Dave Aranda and its defensive staff.

“Dave and I meant to be more multiple,” Orgeron said Thursday. “Let Dave cut loose and run his defense. He has. That’s one of the things he can do with coaches like Bill Busch and Corey Raymond. When Corey’s coaching (all) five (secondary positions), we’re limited in the number of things we can do. Now that we have Bill back there, we have Corey, the analysts, they bring in ideas. That’s the reason we can use him so much.”

The Copiah Lincoln product has yet to feature in 2018, but with the Tigers needing help pressuring passers, Orgeron is going to give Moore a look on Saturday.

“He’s been good,” Orgeron said. “You’re going to see him play. We’re going to play him in some pass rushing situations. He’s big and strong. He’s got speed. He has good pass rush abilities.”

Moore’s talent was never an issue. He simply needed time to absorb the playbook. With that accomplished, Orgeron is ready to unleash his athletic end.

“He always had the physical tools,” Orgeron said. “It was just about learning the defense and being in the right place at the right time. We feel he’s reached that point, so we’re going to give him a shot.”

There was a brief scare on Monday when Orgeron declared starting center Lloyd Cushenberry “very questionable” for Florida, but the sophomore looks set to start this weekend.

Cushenberry left LSU’s win over Ole Miss last weekend with an injury, but he practiced this week and will be good for the Gators, Orgeron said.

“He’s by far our best center,” Orgeron said, “and he’s our most consistent lineman. He makes the calls.”

It’s even more critical to have Cushenberry in the absence of senior Garrett Brumfield. LSU’s guards on Saturday will be two relatively inexperienced players: right guard Damien Lewis and one of, if not both, Chasen Hines and Donavaughn Campbell.

One player yet to hit full stride in 2018 is receiver Jonathan Giles, who has just four catches for 20 yards so far this season. The former Texas Tech receiver went for 1,069 yards and 13 scores in 2016 before transferring to LSU, and Orgeron gave him the No. 7, a number recently designated for the Tigers’ top playmaker.

“Obviously, all the players were very impressed with him the year he redshirted,” Orgeron said Thursday. “He was dynamic on the scout team. That hasn’t happened yet. But I’m sure that whatever’s happening, he’s going to break through it and become a good player for us.”

Getting back to myself again

Orgeron called this week of practice one of LSU’s best of the season. The energy was high, particularly on Thursday, as the Tigers get set for the annual matchup with the Gators. The sessions this week included loud blasting of the Gator chomp through the speakers at practice to prepare for crowd noise.

That rivalry, plus LSU’s 5-0 start, has a team many slept on coming into the campaign eager to keep winning – and working.

“You can tell the way they come to meetings,” Orgeron said. “They’re bouncing around. This team is starting to feel their potential. They want to get it done.

“I know this is going to be a battle. We’ve had a great week of practice. We’re as healthy as we’ve been in most positions. We’re ready to go.”