Worsham: The Making of a Legend 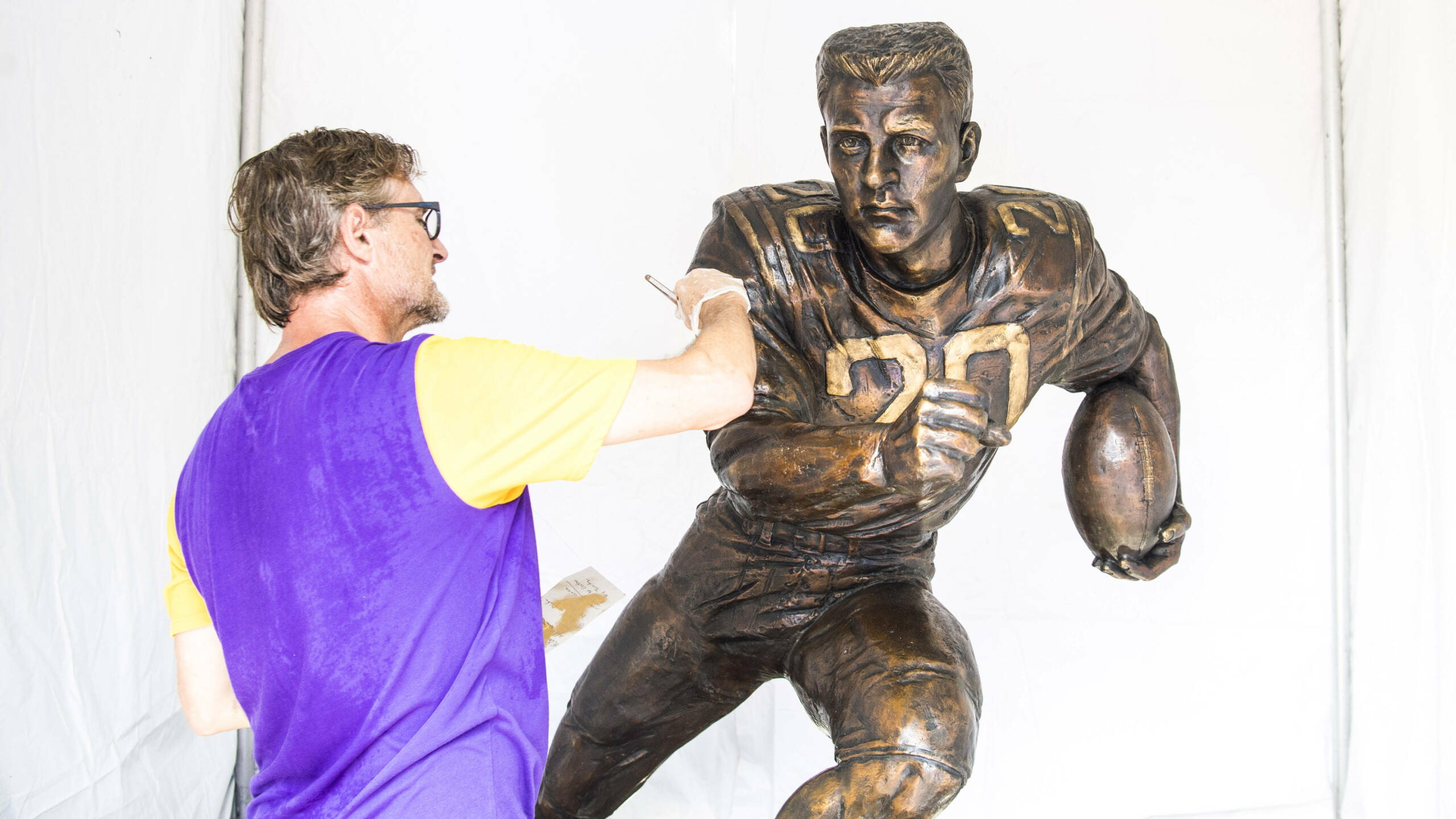 So, too, did Mean Joe Greene – for football’s sake.

These were the countenances sharing a studio with Billy Cannon, as crafted in bronze by sculpture artist Brian Hanlon.

The statue, now standing on the west side of Tiger Stadium in the Championship Plaza, is the second piece Hanlon has created for LSU, joining the Bob Pettit installation on the north side of the LSU Basketball practice facility.

The Toms River, New Jersey-based Master Sculptor has his work scattered across the country –  Tubman will go to Auburn, New York, Anthony to Adams, Massachusetts, and Greene to Denton, Texas – but creating Cannon was a one-of-a-kind opportunity for Hanlon.

“He wasn’t just an amazing athlete – which he was,” Hanlon says. “Anyone who could run 100 meters in 9.5 seconds and also win a shot put competition is extraordinary. But to find out that he struggled in his personal life, but also overcame those struggles, is even more amazing to me. That human aspect connects with the common person so very powerfully.”

It’s why Cannon’s statue is atypical for Hanlon’s work. His redemption arc inspired a different approach.

“Usually the sports sculptures I do, they look heroic,” he said. “The person isn’t really looking into you. Somehow, this portrait is really quite strong and contemplative. I think it is really an educational, inspirational image for the depiction of this very interesting and successful man.”

Hanlon’s artistic process begins with research. Before he can create a likeness, he must understand the person he is re-creating. Usually, that entails research, reading, and interviewing those who knew the subject best in life. That was true in Cannon’s case, but Hanlon happily received more unsolicited help than he’s used to.

“I think the LSU community is very unique,” he said. “In the hotels I stay at, people are very willing to tell you stories – ‘Oh, he was my dentist. Oh, he was my neighbor’s dentist, and I have this story to tell you.’ I don’t really get that at a lot of schools, but this one, you get it, because it’s family.”

Working closely with Senior Associate Athletic Director Emmett David, L Club Special Events & Community Relations Coordinator Kristen Cain, and Cannon’s daughter, Bunnie, the executive director of development support services for the Tiger Athletic Foundation, Hanlon used a number of photos for, first, Cannon’s pose. The majority of his efforts, however, focused on Cannon’s portrait, as he labored to tell the story of not just the Heisman Trophy-winner and legendary athlete, but also the man who made mistakes, paid for them, and found redemption in his final years.

His studio-mates lived, in some senses, far different lives: Anthony, a trailblazer for women’s rights; Tubman a champion of freedom who risked all for the freedom of others. The overlap with Greene, a fellow football legend, is more obvious, of course, but working on all four simultaneously, Hanlon believes, worked to the benefit of all.

“They’re all very reflective in their own way, but Billy’s story by far is really one of a cathartic path as he got older,” he said. “That’s not always the case with someone who has athletic prowess in college. They peak in college, so to speak. That part of his life I found to be quite interesting, much like these other individuals who were certainly pioneers in their fields. I saw links in their story as they progressed with age. Maybe that will give his sculpture more substance.”