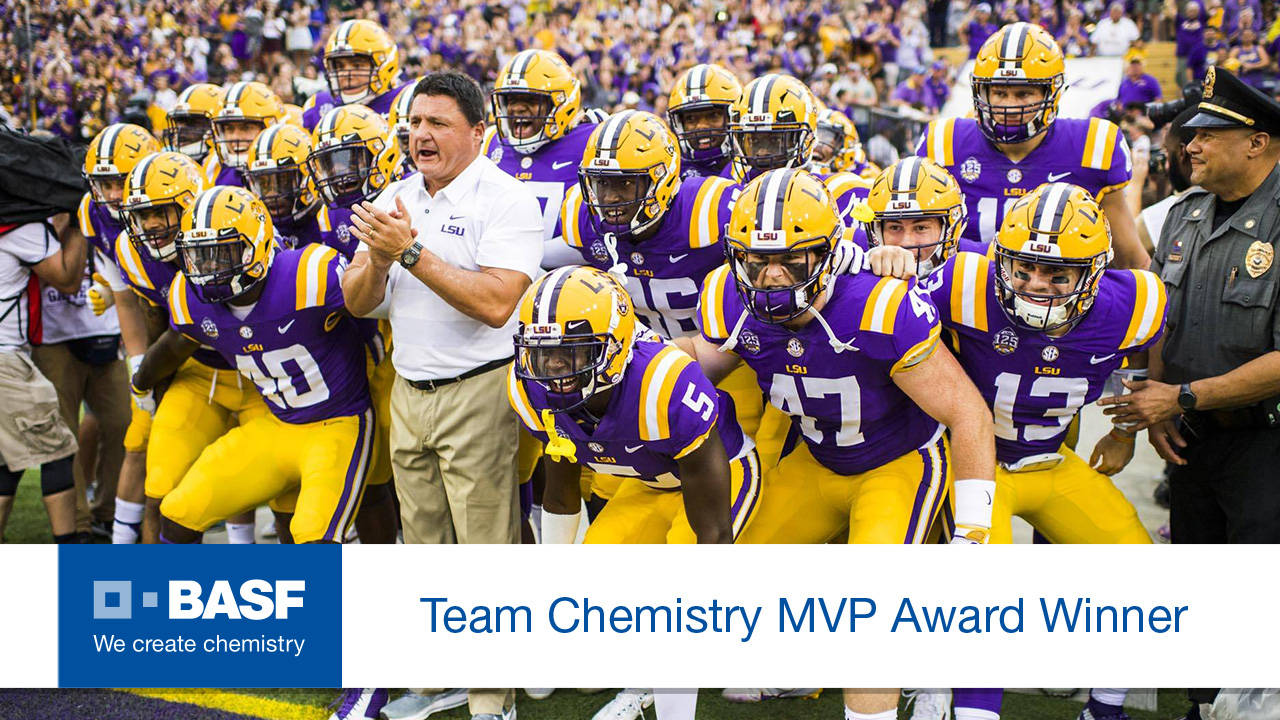 Baton Rouge, La. – Two top-10 wins and an unblemished record of 5-0 has earned the LSU football team the BASF Team Chemistry MVP Award for the month of September.

The Tigers opened up the month with a 33-17 trouncing of No. 8 Miami on Labor Day weekend in Dallas. LSU used 11 first-time starters in the game and Nick Brossette registered the first 100-yard rushing game of his career with 125 yards on 22 carries that included two touchdowns runs, one of which was a 50-yard scamper.

LSU returned to Baton Rouge and pitched a shutout on Sept. 8 against Southeastern Louisiana, a 31-0 victory to move to 2-0. The Tigers were flying around on the defensive end and forced three turnovers while holding Southeastern to 65 rushing yards. Brossette racked up 137 yards on 19 carries and Joe Burrow threw his first two touchdown passes for the Purple and Gold.

Cole Tracy made a 42-yard field goal as time expired to give then-No. 12 LSU a 22-21 win over No. 7 Auburn on Sept. 15. The Tigers became the first team to register two-top 10 wins in the first three weeks of the season since Missouri did so in 1976. Auburn held a 21-10 lead midway through the third quarter, but two field goals from Tracy and a 71-yard touchdown pass from Burrow to Derrick Dillon propelled the comeback on The Plains to move LSU to 3-0 on the season.

Relying on the running exploits of Clyde Edwards-Helaire and Nick Brossette, who combined to rush for 214 yards and five touchdowns, LSU knocked off Louisiana Tech on Sept. 22 with a 38-21 victory. Linebacker Jacob Phillips led the defensive efforts with a season-high 13 tackles. Devin White added 11 tackles, including 2.5 behind the line of scrimmage, scooped up a fumble and had three pass breakups in the win.

The final win of the month came on Saturday night (Sept. 29) against Ole Miss. The fifth-ranked Tigers rolled up 573 yards of total offense en route to a 45-16 victory over the Rebels to move to 5-0. Burrow had the best game of his Purple and Gold career as he completed 18-of-25 passes for 292 yards and three touchdowns while adding a team-best 96 yards and a touchdown on the ground.