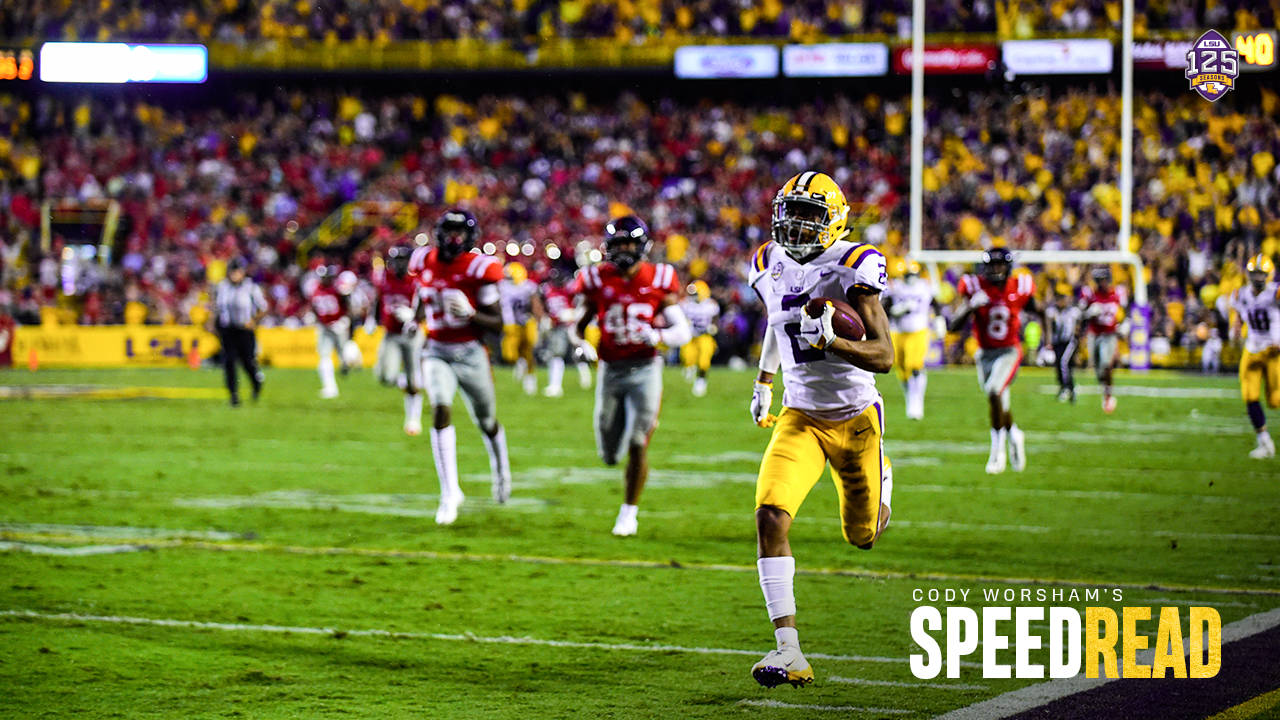 Joe Burrow is starting to like SEC football. The contact, in particular, is something LSU’s junior quarterback relishes.

It was Burrow dishing out most of the pain to the Rebels, whom he torched for 292 passing yards – including three touchdowns – and another 96 yards on the ground.

In LSU’s first four games, the Ohio State transfer showed all the tools – toughness, accuracy, mobility, and poise – that were on display Saturday, but the Ole Miss win was his most complete performance yet as a Tiger. He topped out for the season in completion percentage (72 percent, 18-of-25), passing yards, rushing yards, and touchdowns, displaying a level of comfort with the offense from start to finish that had previously only been seen in flashes.

“Whenever there’s a new quarterback and so many new people on offense, we were figuring out who we were as an offense early in the season,” Burrow said. “Once you get through those growing pains in practice and games, we’re starting to really click. You’d like to be one mind as an offense – coaches and players – and I think we’re getting there.

“I’ve always been confident in myself, but comfortability is key. I’m starting to get really comfortable with these guys.”

It might’ve been Burrow’s best showing yet. But he thinks the best is still yet to come for his offense.

Opponents game-planning for LSU’s passing attack in the coming weeks won’t be able to key on any single receiver.

The Tigers sure don’t.

Burrow spread his 18 completions among nine different players on Saturday. His touchdowns went to Ja’Marr Chase and Justin Jefferson, who found the end zone twice for his first career scores.

“I’ve been telling Joe I need to get in the end zone,” said Jefferson, who also finished with career highs in receptions (5) and yards (99). “He told me he had me.”

He had other guys, too, like Stephen Sullivan (five catches, 50 yards), Chase (22 yards, 1 touchdown), Terrace Marshall (52 yards), and Racey McMath, who caught his first two career receptions for 42 yards.

“We have a lot of good receivers,” said Jefferson. “Just spreading that ball out, keeping our momentum up, gives us that energy to go out there and keep making plays. Any time, they can call your numbers. You just have to stay focused and when they call your name, do what you gotta do.”

You never quite know where Grant Delpit is going to pop up these days.

For LSU this season, it’s usually been the right place and the right times.

The sophomore safety/jack-of-all-trades stuffed the stat sheet Saturday, with five tackles, 2.5 for loss, one hurry, one pass break up, one sack, and, of course, superb interception, his second of the season.

Knowing the Rebels – who entered the game as the SEC’s leading passing offense at 347.5 yards per game – like to take deep shots early, Dave Aranda moved Delpit further back from the line of scrimmage from previous games, when he’s been used more as an in-box safety.

“We wanted him to play in the post tonight and key on the Z and X receivers,” said head coach Ed Orgeron. “That’s what he did tonight.”

Never better than on his interception, which set the tone for a night on which Ole Miss quarterback Jordan Ta’amu finished with an 84.1 passer rating. Delpit displayed his incredible range to break to the left sideline and laid out for the pick, holding on for dear life after a fall of constant reminders from safeties coach Bill Busch of the 22 interceptions LSU had dropped its previous two seasons.

“We know they like to take deep shots on the first couple plays of the game,” Delpit said. “Just tried to read the quarterback’s eyes and cover a lot of ground. I was grateful he threw me one on the numbers.”

From there, LSU’s secondary was dominant, holding the Rebels to nearly half their season average in the air and minimizing the big plays that fuel the Ole Miss attack. This, just a week after surrending more than 300 yards to Louisiana Tech, just the second time a team exceeded that figure against a Dave Aranda-led LSU defense.

“We had to fix it,” said sophomore cornerback Greedy Williams.

The Quote: “Nowhere Near”

That was Orgeron’s response when asked if LSU had reached its potential.

“We haven’t played a complete game yet,” he said. “We have to remain hungry.”

Orgeron still had qualms with his team’s performance against the Rebels, pointing out a lack of pass rush, losing the turnover battle, and recurring third quarter issues (though LSU did score its first third quarter touchdown of the season on Saturday). It takes just one look at some of the opponents still to come on the schedule – starting next weekend in Gainesville against Florida – to see why the Tigers can’t begin to consider resting on their laurels.

“We have to play our best to beat anybody,” Orgeron said. “Every team in the SEC is going to be a challenge.”