"He Always Had a Smile" | Remembering Wayde Sims 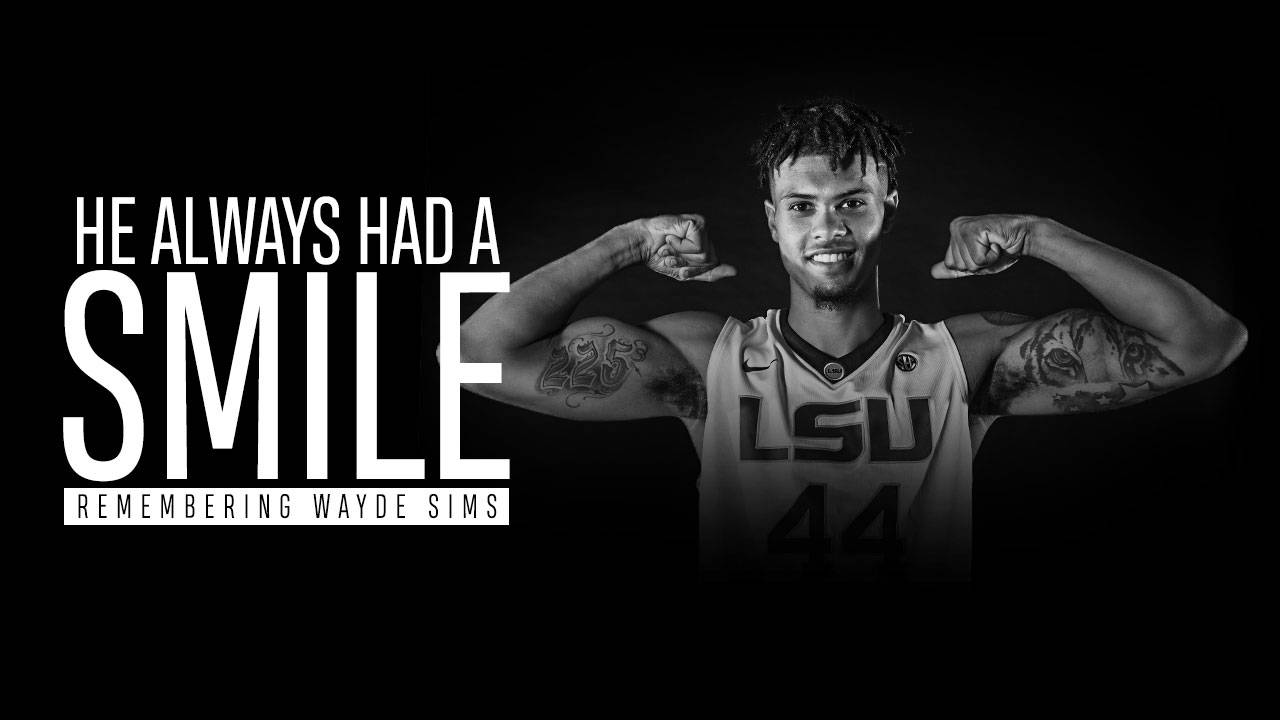 THE LAST TIME I saw Wayde Sims, he was smiling.

It wasn’t hard to make Wayde smile. A joke could do the trick, but it wasn’t necessary. Usually, any question about basketball elicited an ear-to-ear grin. He loved the game.

On Wednesday, less than 48 hours before his death, Sims was smiling because Boot Camp was over. LSU’s annual preseason conditioning test is not for the faint of heart, but the Tigers got a pleasant surprise this year for the final session.

“We didn’t expect it,” Sims said, flashing that smile through his words. “We thought we were having” – he paused – “Boot Camp. Like Boot Camp, Boot Camp.”

Instead of Boot Camp, Boot Camp – basically code for windsucking sprints or leg-wobbling stadiums – the Tigers headed to the U-REC Challenge Program, a high ropes course on campus. Half the team might’ve preferred the sprints. They were afraid of heights.

As usual, he was smiling.

“He could have done it without the ropes on,” said head coach Will Wade. “He’s up there just hanging around and joking around with everybody.”

He was happy to help, too. Not everyone shared his courage. His teammates needed him, and, if he loved anything more than basketball, Wayde loved to lend a hand to his teammates.

“We still learned something out of that experience,” Wayde said Wednesday. “We went as two groups. In my group, the people that went first, was mostly guys who weren’t really scared. They were confident. We had people lagging behind who were scared of the height.

“We had to know we had a teammate behind us. We had to help them, drag them along the way, and encourage them to get that job done.”

Wayde made sure they got the job done. And he did it with a smile.

@LSUBasketball finding the limits of their comfort zone today thanks to the @LSUUREC #earnit #BootUp #LSU pic.twitter.com/kU2QkoQBjZ

THE FIRST TIME I saw Wayde, he had a smile.

I don’t remember which gym, but it doesn’t matter. That’s probably where he was happiest.

Wayde grew up around the game. His father, Wayne, played for LSU in the late 1980s/early 1990s, next to Shaq and Chris Jackson and Stanley Roberts. Wayde was raised wearing purple and gold overalls with Tiger stripes on them.

“He grew up LSU,” Wayne told me a couple years ago.. “We’d go to all the basketball games, football games. It’s in his blood.”

I first met Wayde when he was an eighth grader. I thought he was a 12th grader. He was working out with a former coach of mine, and I watched him finish everything around the rim with both hands. I couldn’t tell if he was left-handed or right-handed. After the workout, my coach stated the obvious.

Boy, was he right. I watched Wayde, from a distance, become a three-time state champion at University High. I watched him grow (only a couple inches – he was tall from the start) from a lanky, skilled pre-teen to a dominant high school forward who twice claimed LHSAA Top 28 Most Outstanding Player honors and signed with LSU his senior season.

I was there that day, too, when he put ink to paper on his letter of intent in November 2015. It was packed with smiling students and teachers, but the only smiles that rivaled Wayde’s were those of his parents, Wayne and Fay.

Pen to paper. Wayde Sims (@wsims2) is a Tiger. pic.twitter.com/H4vzFUMPes

“It’s awesome,” Wayne said. “It’s every father’s dream. For me playing at LSU and him following in my footsteps, it’s a dream come true.”

Wayde sat next to purple and gold balloons and a cake featuring a rendering of the PMAC floor with his name on it. He’d received offers from other schools – his dad was worried Houston might turn his eye after his official visit there.

But no one else stood a chance. He loved Baton Rouge and LSU, as evidenced by the tattoos that adorned each arm: 225 on the right, a Tiger on the left.

“I’m just really excited to be a Tiger,” Wayde told me that day. “I felt like that’s where my heart was and where I really wanted to be.”

“He loved @LSU and Baton Rouge. He loved everything about this program … We want to remember Wayde and what a great person he was. He had an unbelievable spirit to him and everybody was drawn to him.”
– @wwadelsu pic.twitter.com/Uhnss50WRQ

RIGHT NOW, WAYDE’S smile hangs over the arena he grew up in. As I write this, the video board in the Pete Maravich Assembly Center displays his picture hours after his death.

It was the only smile in the building this morning, but even when the board inevitably changes, for one game or another, Wayde’s smile will stick around.

It’s not the only legacy he leaves behind, but it’s the one that – for me, at least, and I think for others, too –  will stand out the most. It’s the symbol of a spirit that will remain here forever, even as his body goes to rest and his soul goes to glory.

“Everyone on the team loved him,” Wade said. “He was the team jokester and prankster, always had a smile and bopping around. He had just an unbelievable spirit to him, and everybody who was around him was drawn to him.

“He’s one of those guys that everybody likes and everybody liked. He has a way about him where if you’re around him, you feel engaged with him, and I just love him.”

On the court, Wayde was to play an important role for the Tigers in 2018-19: a versatile combo forward with a new-look jumper and refined physique after a summer of grinding. It was just Monday his head coach declared him one of the team’s most improved players.

Now, he takes on an even more crucial role. An inspiration. A guardian. A higher calling.

Remember, though: Wayde’s not scared of heights. If his family, coaches, or teammates have any fear about what lies beyond the next step, he’s still here to offer a hand.

And a smile, of course.