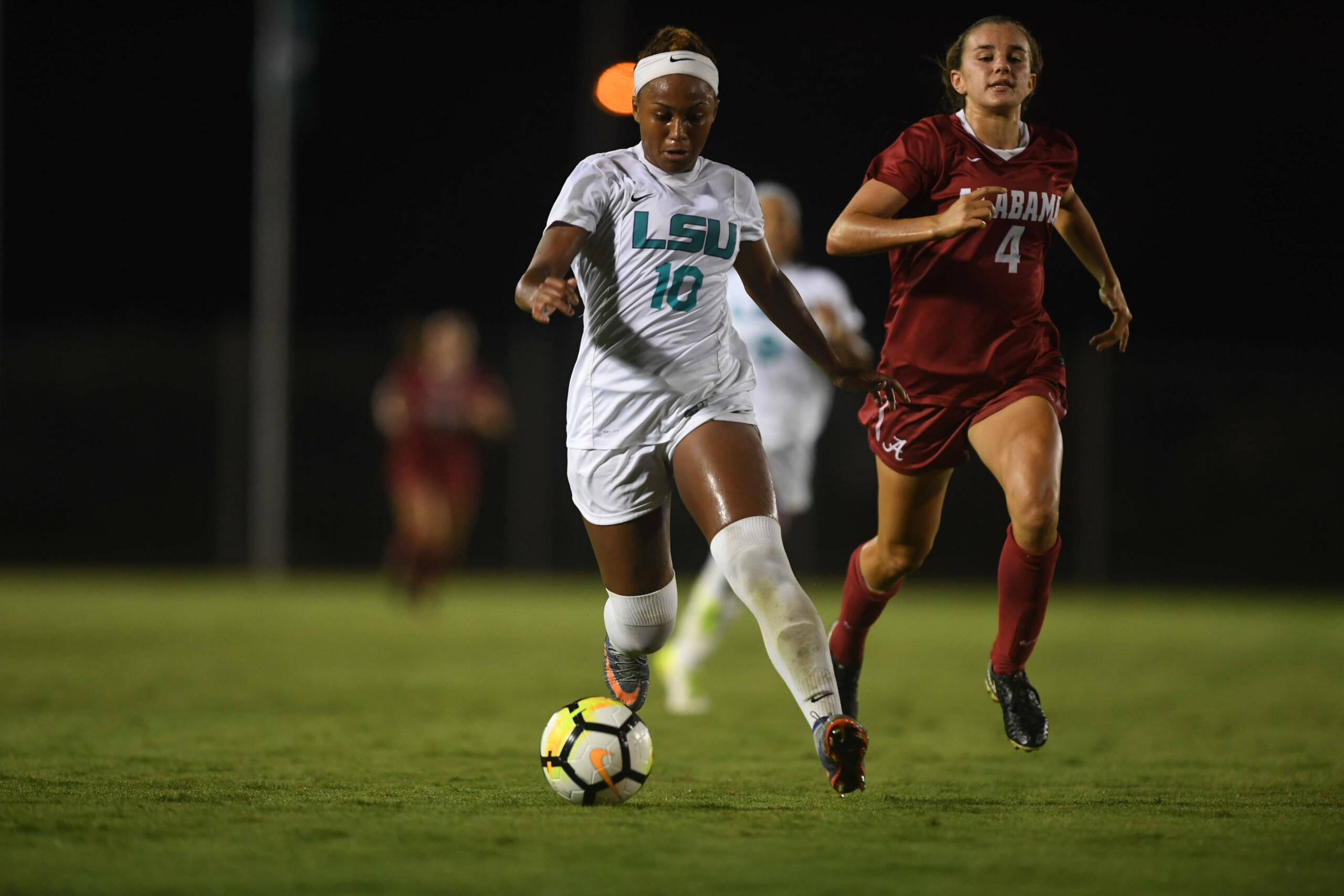 Baton Rouge – Adrienne Richardson scored two goals to help the LSU soccer team pick up its first SEC win of the season on Thursday night as the Tigers defeated Alabama by a score of 2-0 at LSU Soccer Stadium. Caroline Brockmeier matched her season high with 11 saves to record her eighth shutout of the season, a career high. LSU improved to 7-4-1 (1-2-1 SEC) while the Crimson Tide fell to 6-6-1 (0-4-0 SEC).

LSU wasted no time implementing a new attacking style with Alex Thomas and Adrienne Richardson up front early on in the match. Having played the last 10 matches as an attacking right back, Thomas was moved up front to play on the frontline alongside Richardson and it paid off. After Thomas dribbled her way down the right side of the pitch, she drew two Alabama defenders to her and once they converged on her she dropped an excellently placed pass to a trailing Richardson. Thomas’ pass came from just outside the right side of the 18 and Richardson first touched it about 16 yards from the goal. Her first touch allowed her to keep moving to the left and her left-footed strike from eight yards out beat Alabama’s keeper to the far post to give LSU a 1-0 lead. Richardson’s goal came in the sixth minute of play.

Marlena Cutura sent a ball deep into Alabama territory after an LSU goal kick and the clearance by Alabama came towards the direction of Tinaya Alexander. Alexander let the ball bounce once before kicking it backwards over her head to Richardson who was just entering the right side of the box. Richardson beat an Alabama defender to her right and shielded her away before sliding a shot to the far post past the Alabama keeper for the second of her night in the 65th minute of play.

Once again LSU senior goalkeeper Caroline Brockmeier was brilliant in goal on Thursday night. She matched her season high in saves with 11, a number she registered just one week ago against a ranked Auburn team. Brockmeier made double digit saves, but a few of them were absolutely astonishing. In the 54th minute Alabama’s Christina Maartensso played in a nice cross and Riley Mattingly’s header from less than four yards out was stoned by Brockmeier’s left hand in a bang-bang reaction. Less than eight minutes later another header would have found the back of the net if it weren’t for the cat-like reflexes of Brockmeier. Emma Thomson came flying into the box unmarked and her header from seven yards out was brilliantly played by Brockmeier. It was Brockmeier’s eighth shutout of the year, which is a career high for the Tallahassee, Fla., native.

“Great win. The SEC is such a gauntlet. The quality of the league is so high. Our series with Alabama as of late has been really competitive. I thought we got great effort from everybody on the field and our women on the touchline really helped push their teammates over the endline.” – Head Coach Brian Lee.

The Tigers have a full week off before their next match. They will head to Fayetteville, Ark., for a Thursday night match against Arkansas on Oct. 4 at 6:30 p.m. CT.