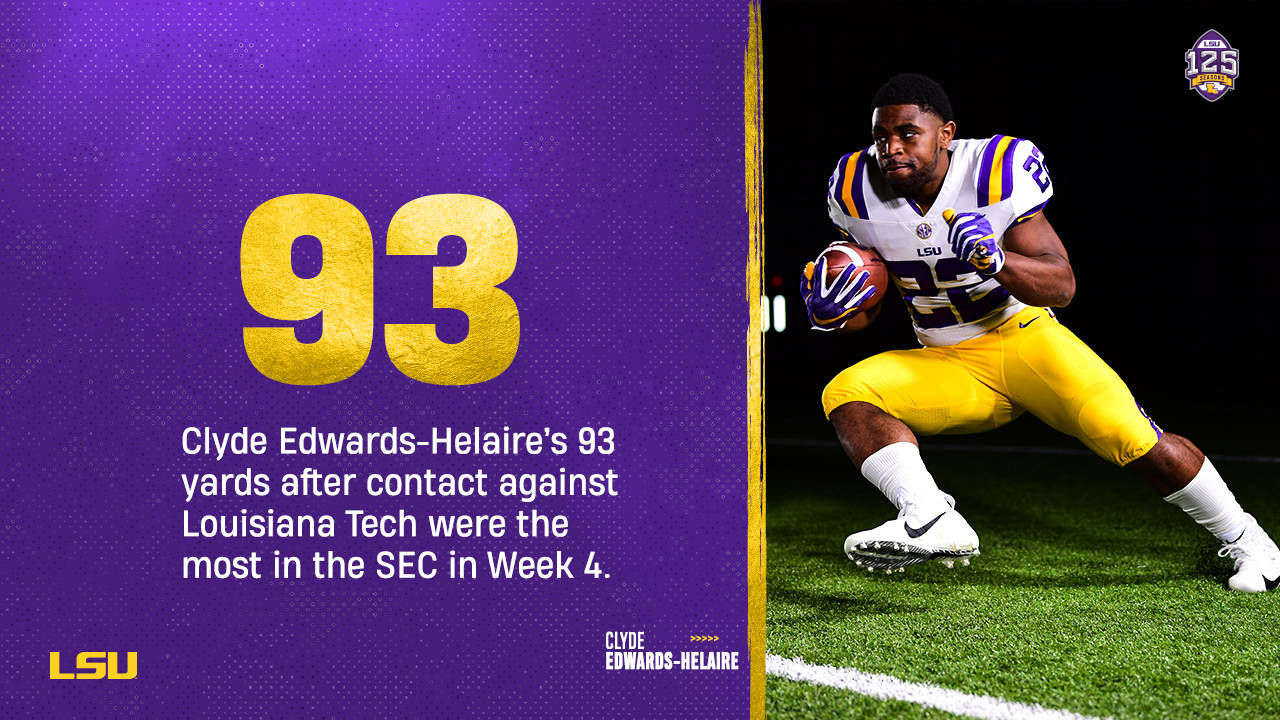 An issue for LSU on offense this season has been throwing the ball when Joe Burrow is under pressure.

The issue is two-fold: there’s been too much pressure on Burrow, and he’s not been effective when that pressure comes.

Burrow had his finest game under fire as a Tiger, showing real improvement when defenders got to him.

Very decisive here. Moreau isn’t quite open at point of release, but he trusts the read. pic.twitter.com/SDsaFc419J

Once again, throwaways and drops deflated Burrow’s final numbers, but I thought it was his best game as a Tiger. The improvement he’s shown from week one to week four is impressive. It’s clear he’s growing more and more comfortable with the offense and the speed of the game.

Once again, the box score doesn’t do a Tiger justice.

A look at the lines shows Breiden Fehoko had just a single tackle and no other recorded stats.

The film shows just what a menace he was to Tech, though.

ProFootballFocus graded him as LSU’s best defender for the game, and his 85.2 grade against the run was his best of the year.

Fehoko tallied five pressures as a pass rusher, consistently forcing J’Mar Smith to improvise. His strength at the point of attack was simply too much for Tech to handle.

A trend in this game: La. Tech needing three to block Fehoko. pic.twitter.com/tH28FAMg8M

He was also great against the run, part of the reason Tech couldn’t get anything going on the ground. His technique on this stop is textbook – engage the blocker, peek into the hole, shuck him, and tackle.

Breiden Fehoko graded out tops for LSU in the run game vs. La Tech per @PFF_College at 85.2.

Doesn’t get much better than this. pic.twitter.com/mlrKOKuxIL

There honestly weren’t as many issues in the secondary as I expected before watching the film. Yes, LSU gave up 300 yards passing for just the second time under Dave Aranda. Yes, there were mistakes.

But most of them were on an individual, play-by-play basis, and most were very marginal. Take, for example, Adrian Hardy’s two touchdowns. On the first, Kristian Fulton simply loses outside leverage at the jam and lets Hardy slip inside. That’s fixable technique.

On the second, there’s not quite enough pressure on Smith, who does some crafty work with ball fakes and eye manipulation in the pocket to set up Hardy for another one-on-one with Fulton. Fulton has great coverage and contests well – he misses a PBU by inches. If he’s in that spot for the rest of the season, he’ll win those balls more often than not.

For example: Fulton’s in a good spot here. Not quite enough pressure — you’d like for Smith to be less comfortable with all the head and ball fakes. Someone at his feet to keep him from stepping into this throw. But this is also good offense beating good defense, which happens. pic.twitter.com/y0qE1r3DOp

20: Grant Delpit has been targetted more than any other safety in the SEC, but he’s standing strong. His NFL passer rating when targetted is 60.0, and his performance against Tech was his best.

No safety has been targeted more in the SEC this year, but he’s stood firm, allowing just a 60.0 NFL passer rating this season, fifth in the SEC among safeties. pic.twitter.com/0932d9V2lU

27.1: Grant Delpit’s NFL passer rating in slot coverage, the best in the SEC.

87.2: Clyde Edwards-Helaire’s 87.2 offensive grade was the best by any Tiger all season.

93: Edwards-Helaire’s yards after contact vs. Tech, the most in the SEC in Week 4.

Clyde Edwards-Helaire is a matador. pic.twitter.com/0OKkSL7jCw

7.5: LSU’s yards per carry when running off left tackle against Louisiana Tech.