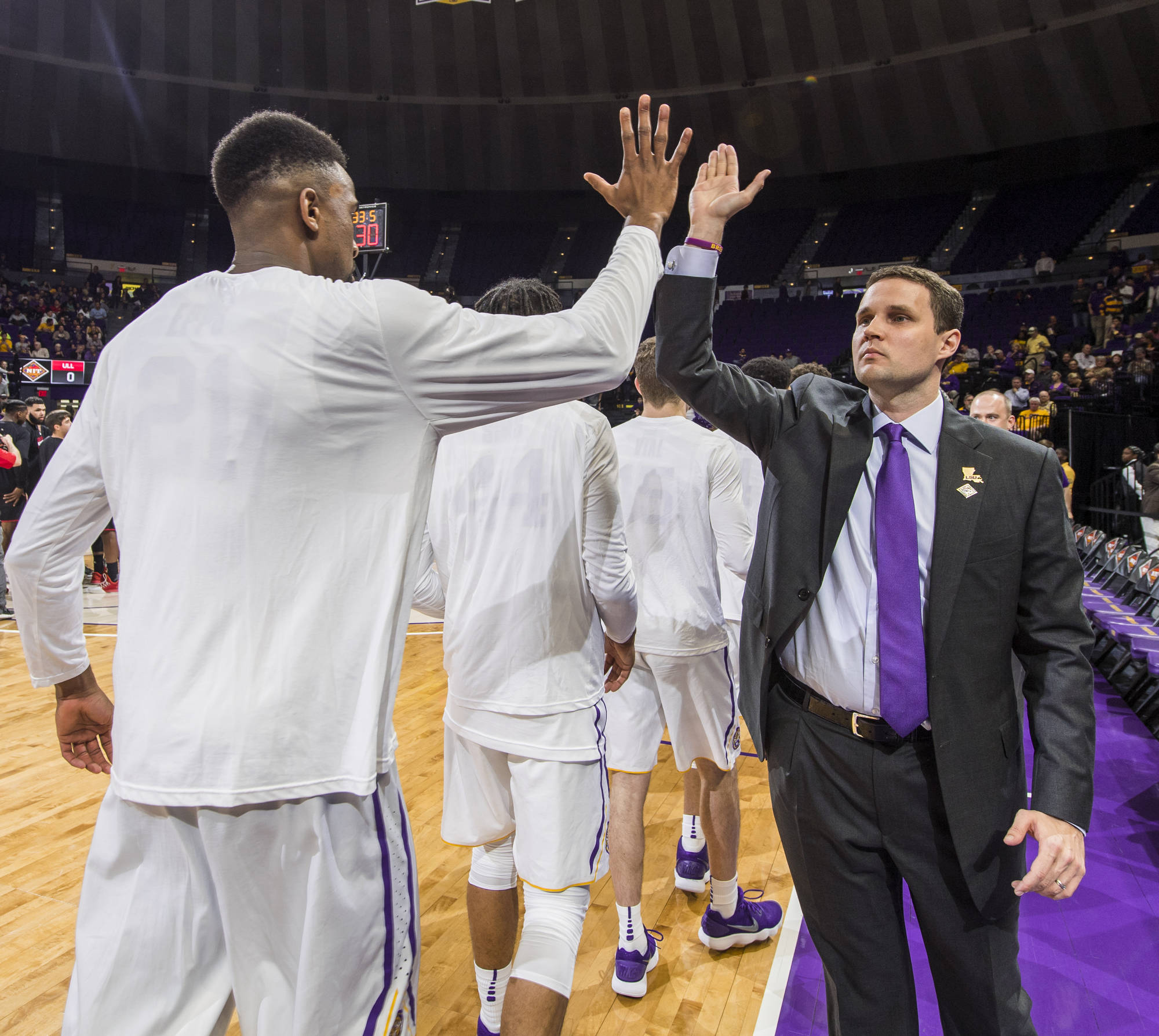 Will Wade knows how high expectations are for LSU Basketball heading into his second year.

With a returning core of proven players with postseason experience and an incoming recruiting class ranked as high as No. 3 in the nation, observers around the country are picking the Tigers in numerous top-25 polls and way-too-early NCAA Tournament brackets.

“I think expectations are good,” Wade told the media at his first press conference of the season Monday. “Our expectations internally are going to be much higher.

“But that doesn’t matter. You’ve got to earn it.”

Wade spoke with the media for a half-hour, addressing everything from his talented crop of freshmen, his improved vets, and his thoughts on the season ahead.

Here are five things that stood out from Monday’s session.

While the highly-touted signing class will garner plenty of headlines, LSU’s success in 2018-19 will rest largely on the shoulders of the familiar faces who formed the nucleus of last year’s 18-win squad.

Wade singled out juniors Skylar Mays and Wayde Sims for the strides they’d taken this summer. Mays, who averaged 11.3 points per game last season, has improved “as much as anybody on our team,” Wade said, so much so that he’ll likely roll out lineups featuring three point guards in Mays, Tremont Waters, and freshman Ja’Vonte Smart.

“He’s shooting the cover off the ball,” Wade said of Mays. “I have an unbelievably high level of trust in him and what he does. We can talk about all this other stuff all we want, but Skylar is phenomenal, so we’ll certainly play all three guards together quite a bit.”

Sims has worked at the 3 and 4 positions this summer, developing his jumper and ball handling enough to offer LSU a legitimate option at either spot.

The tone’s been set by the vets, but the rookies are following suit, too, Wade said.

He raved about three he was asked about in particular: Naz Reid, Smart, and Darius Days.

Asked if Reid “could be” a first round NBA Draft pick next year, Wade laughed.

Reid, a five-star signee out of New Jersey, has reshaped his body and arrived on campus ready to work. He’s lost more than 20 pounds and impressed with both his attitude off the court and his IQ on it.

“He’s a hard, hard worker,” Wade said “He’s a great listener. The way he sees the game is just tremendous. The best way I can put it is it’s like having Tremont at the power forward, center spot. He’s just a play maker. He’s got great feel, great hands. He’s unbelievably diligent, tremendously smart, has great intellect on the court. He’s got an unbelievable basketball IQ. He’s getting in the best shape of his life, and it’s showing in how he plays and how consistent he’s been. I couldn’t be more pleased with him and more proud of him for his progress.”

On the perimeter, Smart has added a level of grit Wade has wanted since he arrived in the spring of 2017. Wade referenced Smart’s work last Friday during workouts, which included going 4-0 in team play and winning sprint after sprint, as “one of the most impressive things I’ve seen as a college coach.”

“He’s as tough a competitor as I’ve seen,” Wade said. “Whoo. He’s the real deal. He competes and plays so hard.”

Smart also offers a local presence as a high-profile recruit from the Baton Rouge area.

Wade also noted the edge Emmitt Williams brings inside to the post players and referred to Days as “the mayor of campus” because of his engaging personality. Williams and Days have spent much of the preseason doing battle in the post, to the benefit of both.

Coming off a historic season that saw him lead the team in scoring and set the school record for assists by a freshman, Waters will be the team’s offensive catalyst once again in his sophomore season. He’s another player who has transformed his body, adding muscle to his frame over the summer.

Wade’s message to his talented point guard has been simple: elevate your game by elevating your teammates.

Look for some key differences in the way LSU plays this season.

First and foremost, their philosophies will be simplified on both ends of the floor. More talent means less tactics.

“My opinion is the more talent you have, the less you need to do with all that sort of stuff,” Wade said. “I think you need to put them in positions where they’re not thinking and playing off their natural talents. We’re trying to get really good at a few things. Last year, we had a grab bag of stuff we just kind from each game and see what worked. This year, I think we need to be really really good at three or four things on defense and really really good on three or four things on offense. If we can do that, we can let natural talent and ability to take over.”

Wade has also tried to overhaul what he calls LSU’s “special teams” – baseline out of bounds, sideline out of bounds, free throw situations, and other plays that take place after dead balls. He said he expects his teams to gain four to six points per game on special teams, but last year’s squad lost 2.5 per game. He put the blame squarely at his own feet and said they spent ample time this summer addressing it.

“Our special teams were just terrible,” he said. “I did a ton of work on that in the offseason and we’ve got to get our special teams better. 30 percent of the game is after a huddle and we were terrible out of huddles offensively and defensively. We were better offensively than we were defensively out of huddles, but we got beat on fast breaks, on missed free throws, on made free throws, free throw blockouts, all that sort of stuff. We gave away way too many points.If we had 2.5 points a game back, we would have won another couple games. We came back and did an intensive study on that in the offseason and that’s been a big emphasis area for us.”

The hype around LSU might be warranted, but Wade says it’s worth nothing if his program doesn’t back it up.

What worked yesterday won’t help you tomorrow, he says. No one is entitled to, on an individual basis, playing time, nor, in the collective sense, is anyone entitled to victories.