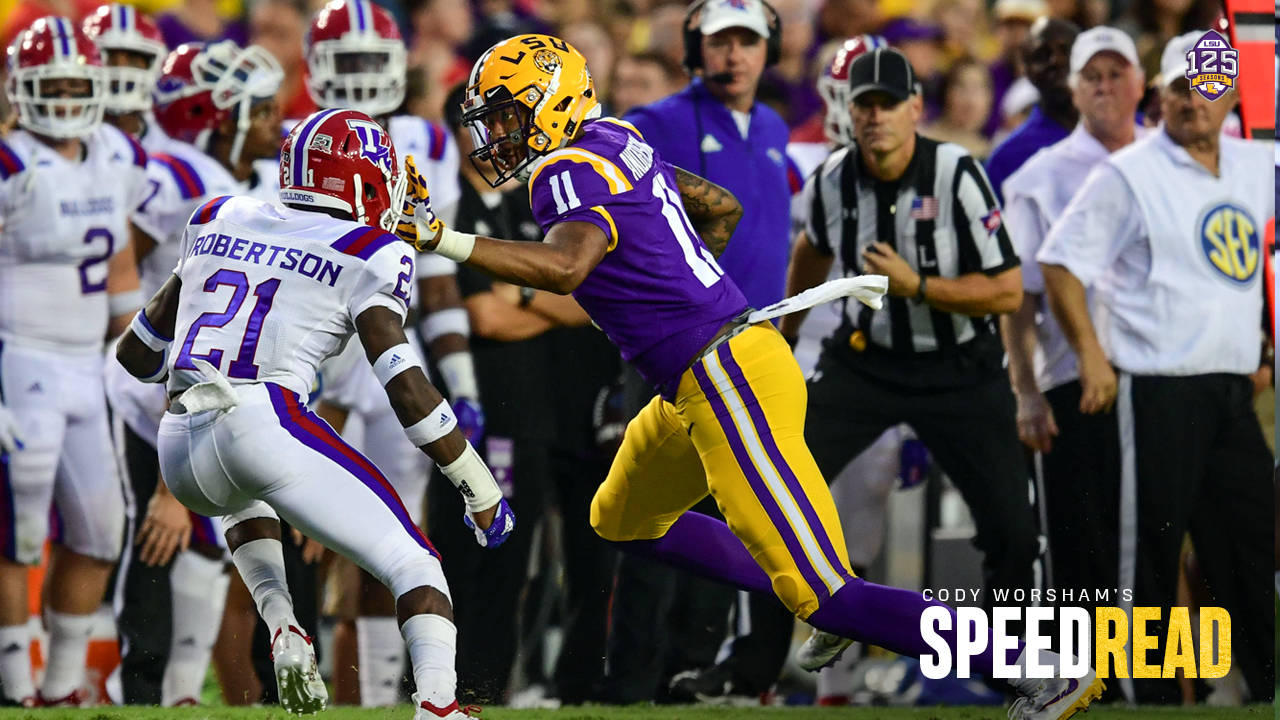 He’s quiet around his teammates, and after LSU’s 38-21 win over Louisiana Tech on Saturday night, he didn’t talk to reporters.

His play, however, did plenty of talking.

And, if you’ll let Foster Moreau speak on his behalf, he’ll tell you just how deserving Anderson is of the breakout performance he produced against the Bulldogs.

“I’m especially proud of Dee,” said Moreau, “because I’ve been pretty close with Dee in the past. It was always one thing or another that was holding him back from being a great player. I think all that’s behind him now. He’s just doing an incredible job for our team. He’s been such a successful playmaker. We’ve known he could do these things.”

Dee Anderson’s got a knack for making big plays of late. pic.twitter.com/ZgjvFeOsEh

Anderson delivered to the tune of five catches for 80 yards on Saturday, including a critical 28-yard reception down the left sideline in the fourth quarter. With LSU’s lead trimmed from 24 to just three points and the offense stalling out, Anderson leapt over his defender to snag a Joe Burrow pass and kept a foot inbounds. Later in the drive, he grabbed a six-yard reception and then drew a third-down pass interference call to set up a vital touchdown.

“If there’s an MVP tonight, he’s the MVP of the game,” said head coach Ed Orgeron. “I thank God we had him.”

“When Dee Anderson does well,” said Burrow, “we do well.”

Coming into the season, Anderson had totaled just seven receptions for 118 yards. He’s surpassed that in the last two weeks alone, with three catches for 41 yards vs. Auburn – including a vital third down conversion on the game-winning drive – and the career game Saturday against Tech.

“Dee’s come a long way,” said Orgeron. “He’s a fantastic athlete. He’s really worked hard on his maturity. I’m proud of him. He’s got a ways to go. But he’s doing all the things we asked him.”

Moreau got choked up speaking about Anderson’s day, which meant more than a win on the scoreboard and some yards in the statbooks.

It was the night of running backs for LSU:
– Brossette: 3 touchdowns
– Edwards-Helaire: 2 touchdowns, 136 yards
– Devin White: This very good impression of a running back. pic.twitter.com/ULVH16WOJe

Devin White has been angling all fall for touches near the goalline. The high school running back turned All-American collegiate linebacker is yearning to get back to the endzone.

For a minute on Saturday, it seemed he had.

The junior plucked up a fumble forced by Kristian Fulton with a solitary hand and galloped for what was initially ruled a touchdown. Replay showed White actually stepped out at the three-yard line, but the turnover and 29-yard return set up the Tigers’ second score three plays later.

Devin White:  “I showed that I was like a powerful back on that run…I think they should let me be the goal line running back a couple times. I know I’m going to punch it in. Wish I could’ve gotten the touchdown. I’m sad I stepped out of bounds. It won’t happen again.” pic.twitter.com/ZD8cQValMb

The decision to pick the ball up with one hand rather than fall on it? Totally conscious, White said.

“I’m not jumping on no ball,” he said. “I’m not sliding, I’m not running out of bounds. I want the contact, and I want the touchdown.”

There’s a statistical indicator that, for 76 straight contests, has been every bit as reliable as the scoreboard in determining whether or not LSU has won the football game.

The last 76 times LSU has both rushed for more than 100 yards and held the opponent below 100 yards, they’ve come out on top, a streak that extended Saturday, despite defensive miscues and offensive stumbles.

“We out-physicalled them on the line of scrimmage on offense, which allowed us to be able to run the football,” said Orgeron. “I think that was the difference in the game.”

This, despite the absence, for most of the game, of four likely starters on the offensive line. None of Adrian Magee, Saahdiq Charles, and Ed Ingram were available for the game, and Garrett Brumfield left in the second quarter with an injury, meaning the Tiger offensive line featured five players who entered the season without a start in their collegiate careers.

“Since day one of camp we always said next man up,” said center Lloyd Cushenberry. “We’re going to need everyone in the room. Everybody’s ready to step up. Yeah, it’s a little tough, but what can you do about it? You still have to play.”

Meanwhile, the LSU rush defense clamped down against a Tech team averaging more than 200 yards rushing per game coming into the matchup. Only 37 came after halftime, at just 2.8 yards per clip.

“We were able to buckle down and come out with the win, but we didn’t play as good as we should’ve,” said sophomore linebacker Jacob Phillips, who led the team with 13 tackles.

The Quote: “We give those guys the ball, and we put Louisiana in their hands.” – Foster Moreau on Clyde Edwards-Helaire and Nick Brossette

The Baton Rouge duo were dynamic on Saturday, with Edwards-Helaire providing the speed and shiftiness and Brossette providing the bruising, physical presence inside the tackles to help gash the Tech run D.

Edwards-Helaire finished with a career-high 136 yards and two touchdowns, while Brossette scored on the ground three times.

“The offense coach (offensive coordinator Steve) E(nsminger) runs is perfect for any type of back,” said Edwards-Helaire. “Being able to have that contrast with Nick and I is something a lot of coaches don’t have the luxury of. You have a patient back, you have a scat back, and to get them both on the field in any situation is beneficial.”

LSU has now had at least two players reach the 100-yard rushing mark in a game for 10 straight seasons. With all the questions surrounding the position coming into the season following the departures in recent years of players like Leonard Fournette, Derrius Guice, and Darrel Williams, Brossette and Edwards-Helaire’s patience are paying off.

“They’ve always worked their butts off,” said Moreau. “They’ve been patient, they’ve waited their turn, and they deserved this. We give those guys the ball, and we put Louisiana in their hands. They do an incredible job for us.”