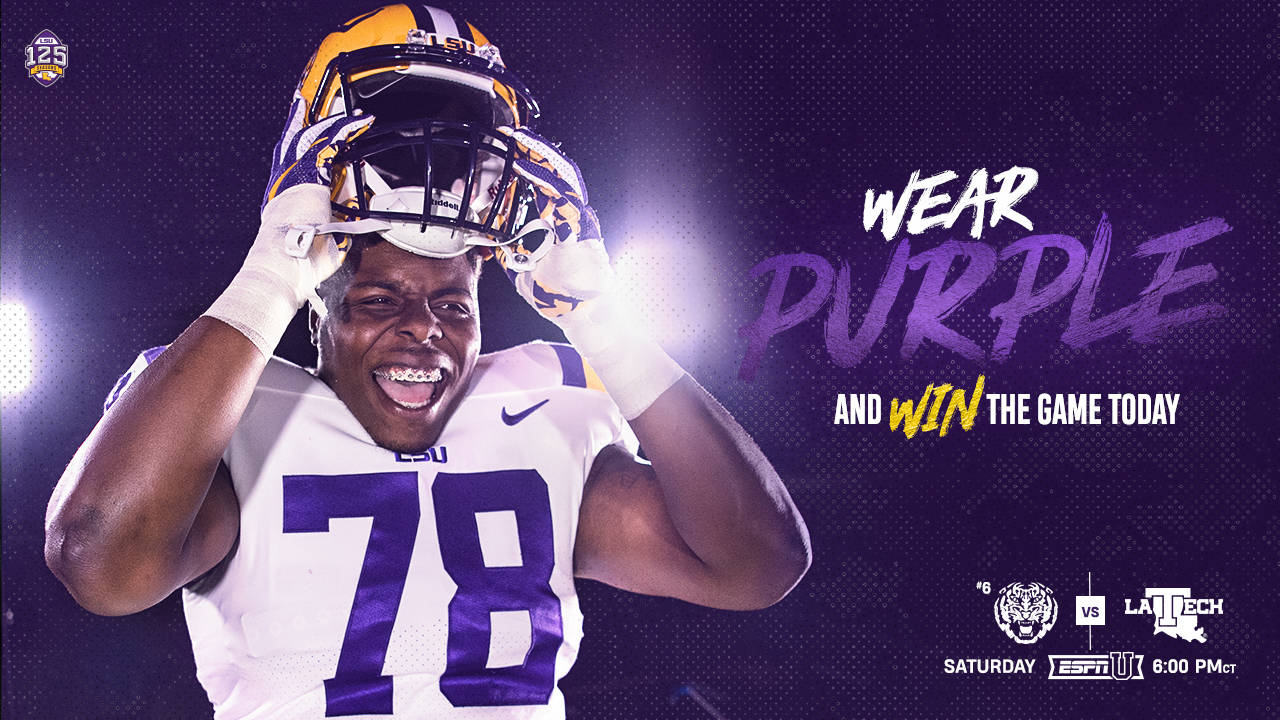 Following its second top-10 win in three weeks, No. 6 LSU (3-0, 1-0 SEC) returns home Saturday for a 6 p.m. kickoff on ESPNU against Louisiana Tech, as the Tigers look to build on their best start since 2015.

Fans can also catch the game online via WatchESPN.com or listen live on the LSU Sports Radio Network (LSUSports.net/live).

Saturday also marks The Purple Game, as the Tigers will don their purple uniforms for the first time this season. Fans are encouraged to wear purple attire to the game, as well.

LSU is back for Saturday Night in Death Valley on the heels of a 22-21 come-from-behind win at Auburn, where Cole Tracy‘s 42-yard field goal gave the Tigers their first ever walk-off, game-winning field goal. After taking a 10-0 lead at the game’s outset – sparked by Grant Delpit‘s interception on the second play from scrimmage and Clyde Edwards-Helaire‘s first career rushing touchdown – Auburn took a 21-10 lead early in the third quarter. LSU, however, finished the game with 12 unanswered points, including a touchdown pass from SEC Offensive Player of the Week Joe Burrow and two field goals from Tracy, the SEC Special Teams Player of the Week.

“We talked about having poise all week,” said head coach Ed Orgeron. “It was going to take 60 minutes and it took every second of the game. We talked about finish, and we finished.”

The big win sets the stage for Saturday’s matchup with Louisiana Tech (2-0), against whom LSU holds an 18-1 record all-time. The Tigers have won 30 straight games against in-state opponents, including a 31-0 victory in the 2018 home opener against Southeastern.

The key to LSU’s success so far this season has been its ability to prevent turnovers on offense and cause them on defense. A season after tying the NCAA record with just eight turnovers in all of 2017, LSU is the only team in the country yet to turn the ball over in 2018, and Dave Aranda‘s defense has forced seven – two fumbles and five interceptions – in three games.

“It’s something that we work on,” Orgeron said. “It’s all about the ball. I’m proud of (LSU offensive coordinator Steve) Ensminger. It takes all 11 to protect the football. Obviously some great decisions. Good ball security by our backs. It’s an overall team effort.”

Burrow enters the game with 540 yards and three touchdowns passing this season. His favorite target thus far is sophomore Justin Jefferson, who is coming off a career high in receptions (5) and yards (97) last week.

On the ground, senior Nick Brossette continues to spearhead the Tiger rushing attack, averaging 110 yards per game and 5.5 yards per carry.

“He waited his turn,” Orgeron said. “He’s tough, he’s physical and he’s running the ball well and he knows the offense. He’s a premiere back right now and he’s earned that right.”

The offensive line is led by the interior trio of Garrett Brumfield, Lloyd Cushenberry, and Damien Lewis, who have started all three games at left guard, center, and right guard, respectively. That unit had perhaps its best outing against Auburn, allowing just one sack against one of the nation’s top defensive lines.

LSU’s defense, meanwhile, remains among the nation’s finest, ranking 13th nationally in scoring defense while giving up just 12.7 points per game. The front seven, led by Rashard Lawrence on the line and Devin White at linebacker, is limiting foes to just 2.44 yards per carry and has 10 sacks on the season, second in the SEC only to Auburn.

Tracy, who has made more field goals than any kicker in the country, remains one of the nation’s most effective special teams weapons, while punter Zach Von Rosenberg leads the SEC and ranks third nationally with a 47.46 yard per punt average.

Despite the historic start to 2018 – LSU is the first team since 1976 with two top-10 wins in the first three weeks of the season – Orgeron is emphasizing his team remain focused week-to-week on each opponent, not just the highly-ranked ones.