Friday 5: Andre Anthony Stepping Up on the Edge 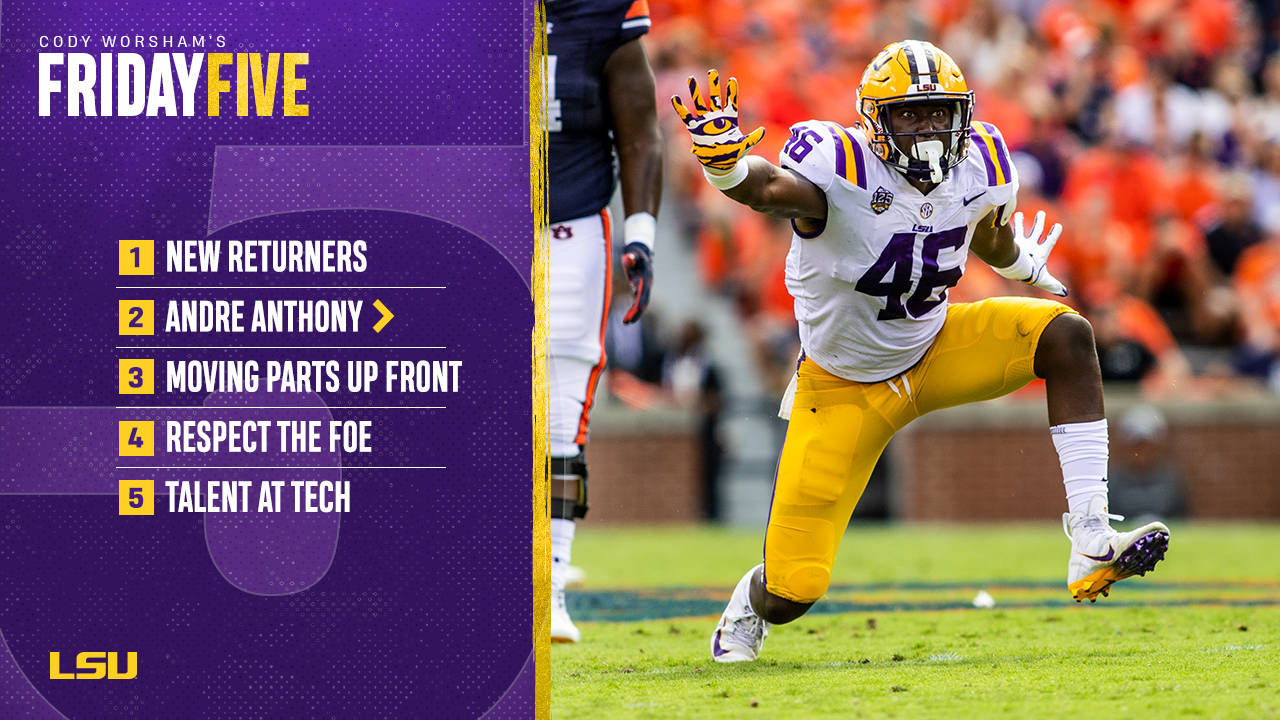 LSU’s punt return units could get an overhaul against Louisiana Tech on Saturday. While junior Jonathan Giles has been effective in the role – his 15.3 yards per return would rank third in the SEC if he had enough returns to qualify – the Tigers could give some other players looks against the Bulldogs this weekend.

“Jontre Kirklin is a guy we’re looking at,” Orgeron said. “He ran some punts today. He was really fast, really good.”

Orgeron also said sophomore receiver Justin Jefferson might get a crack in the return game, as well.

As LSU continues to move forward without injured sophomore edge rusher K’Lavon Chaisson, Orgeron singled out Andre Anthony for his work against Auburn.

The sophomore graded out with the best pass rush grade on the team (74.8) on the road last weekend, according to ProFootballFocus. That’s the second-highest grade by any single player for the Tigers all year, behind Grant Delpit‘s 84.4 against Southeastern. Anthony also tallied 0.5 sacks and 0.5 tackles for loss, per the official box score. PFF credited him with two sacks and a hurry.

“I thought he played excellent,” Orgeron said. “He had the big sack. He did a lot of things. He had some missed alignments, missed assignments. I thought he was physical at the point of attack, he rushed the passer well, he dropped well. I thought he stepped up. I thought he was one of the best players on the field that day.”

“I like the gold set of the jacket. Usually, I go for the gold accessories, but this week it was silver. The gold watch – I don’t really have a silver watch. Otherwise, all my accessories have to match. My jewelry is going to be silver. Got the silver tennis bracelet. The silver glasses with the rims. Got the silver hoops. Then, I just matched it with the black, because I knew the all black was going to set off the jacket.” – Andre Anthony, edge rusher/style icon

Another week, another offensive line look likely for LSU.

The Tigers have rolled out a number of different five-man units in 2018 through three games and will likely use another this weekend. Orgeron called left tackle Saahdiq Charles “very questionable” and suggested Badara Traore would start in his place at left tackle.

“We had a choice to move him to the left or move Austin (Deculus) from right to left,” Orgeron said. “Austin’s doing good at right.”

Traore started at right tackle against Southeastern after a solid performance off the bench against Miami. Orgeron said the junior struggled against the Lions, but they expect he’ll bounce back if called upon against Tech.

After two wins over top-10 teams in the first two weeks, LSU returns home for an in-state matchup against a non-Power 5 foe. Where some might see it as a game that could be overlooked, Orgeron expects nothing less than the effort his team offered against Miami and Auburn away from home, particularly after last year’s wake-up call loss against Troy.

“Some of the things we went through last year helped us out,” said Orgeron. “We’ll never know if we’ve looked past them until game time. We’ve had a good week of practice. We know this is going be a challenge. We’re ready to play football.”

The fact that Skip Holtz brings a team with plenty of names familiar to Orgeron and his team certainly should help them focus. Orgeron said he recruited – and, in some cases, extended scholarship offers to – many of the Bulldogs. Players like Jaylen Ferguson, an NFL prospect at defensive end, and Amik Robertson, a Freshman All-American defensive back last season, will not be strangers to the Tigers.

“A lot of players on that team could play on our team at LSU,” he said. “They have a lot of pro prospects on their team.”