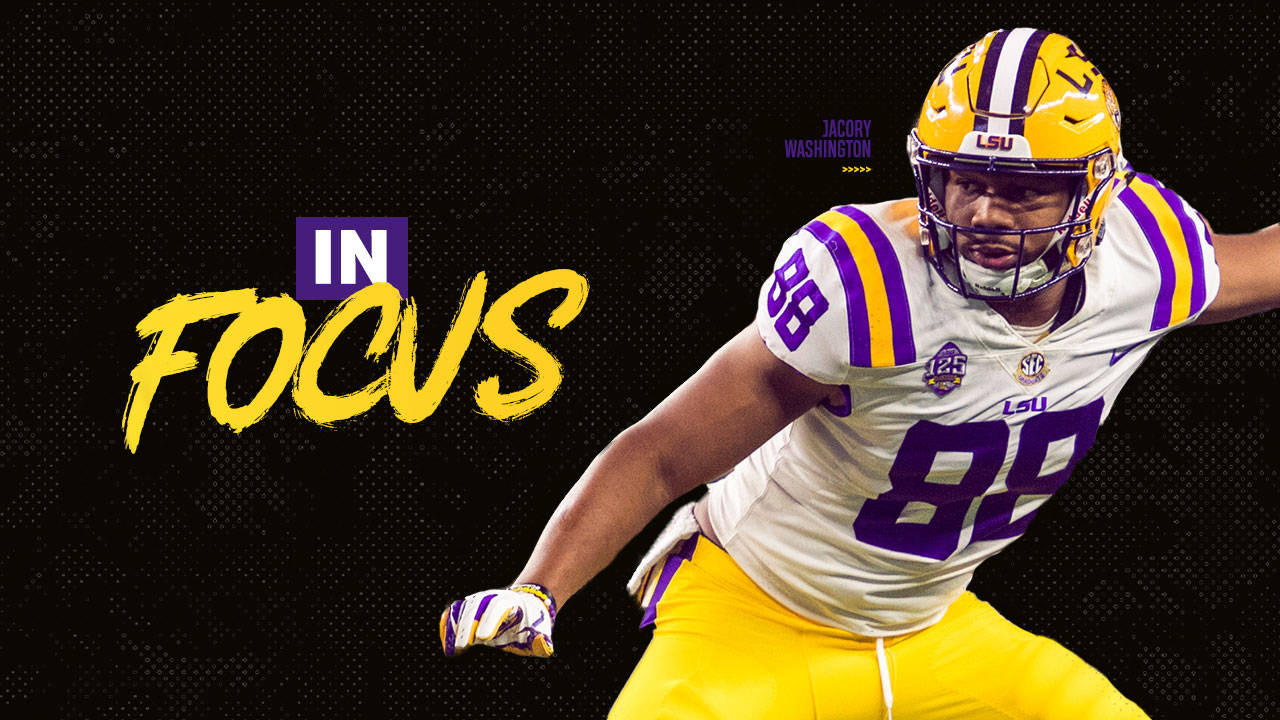 Vince Lombardi once said “Football is like life – it requires perseverance, self-denial, hard work, sacrifice, dedication and respect for authority.”

This quote represents no one on the 2018 LSU Football roster more than redshirt senior tight end Jacory Washington. Coming out of Westlake (La.) High School as a four-star recruit, high expectations and major praise were placed on Washington before he even arrived on LSU’s campus.

However, due to multiple injuries and upperclassmen playing ahead of him, Washington saw limited action on the field as he only caught one pass for six yards in his first four seasons at LSU.

Nevertheless, Washington has stayed with the program and persevered through the adversity that has surrounded him. In difficult times, he leaned on what his family imparted to him when he was younger, something he still takes to heart to this day: “Once I start something, I like to finish. That is a big thing in my family to never give up and keep moving forward and to always have faith to get through whatever we were going through.”

Washington has used these words to stick not only with the football program, but also in his school work, as he graduated from LSU in the summer with a degree in sports administration.

Washington also has two other people to thank for his persevering mindset. Two men he met while he was younger – his cousin, Deion Washington, and Brennan Daigle, a brain cancer patient whom Jacory mentored beginning in his high school freshman year. Both men have passed away, but Jacory continues to draw inspiration from their remarkable strength in the face of hardship.

Deion had a rare condition known as dermatomyositis. Dermatomyositis is a skin condition marked by muscle weakness and a distinctive skin rash. Even though the muscle weakness typically affects both sides of your body and gradually worsens, Deion’s positive attitude during the trials and tribulations of the disease has had an everlasting effect on Jacory.

“The way he lived his life and the way he did things,” Jacory said, “that kind of pushed me to always continue in whatever I was doing and never give up.”

In fact, Jacory speaks about how both of them have had a major impact on the man he is today.

“Just the way those two lived their life,” he said, “it was proof that I could overcome.”

And Jacory is certainly overcoming during his redshirt senior season. Due to injuries at the LSU tight end position, he has been thrust into a major role. Even though he has limited experience, fellow senior tight end Foster Moreau is not worried at all, as he has seen Jacory mature since he was a freshman.

He is also taking a more advanced approach off the field as well.

“We talk about going the extra mile, watching extra film,” Washington explained. “With us getting IPads, we can watch individual film, and I believe things like that will give me an advantage.”

When Washington enrolled at LSU, there were older, more experienced tight ends that he learned from like Colin Jeter, Desean Smith and Dillon Gordon. It is this same leadership role that Washington has now embraced, and it has impressed players like Moreau.

“It means a lot, he’s a veteran voice,” Moreau said. “He has been around through a lot of Coach (Les) Miles’ time, and a lot of Coach (Ed) Orgeron’s time. He has seen a bunch of different coordinators. He has an experienced voice in the room and on the offense.”

Washington has also tried to engage younger players on the team, specifically in the tight end room, and take them under his wing the way that former players assisted him. Washington mentioned freshman Zach Sheffer as a player he is trying to groom for the future, not only for the tight end position but also for the team as a whole.

“Zach and I talk a lot off the field and we are just trying to get him prepared because next year he will have to play a major role,” Washington said.

As for the immediate future, Washington is trying to keep a level head, stay grounded, take one game at a time and have a strong senior season.