Worsham: Nothing Can Slow Down Alex Thomas 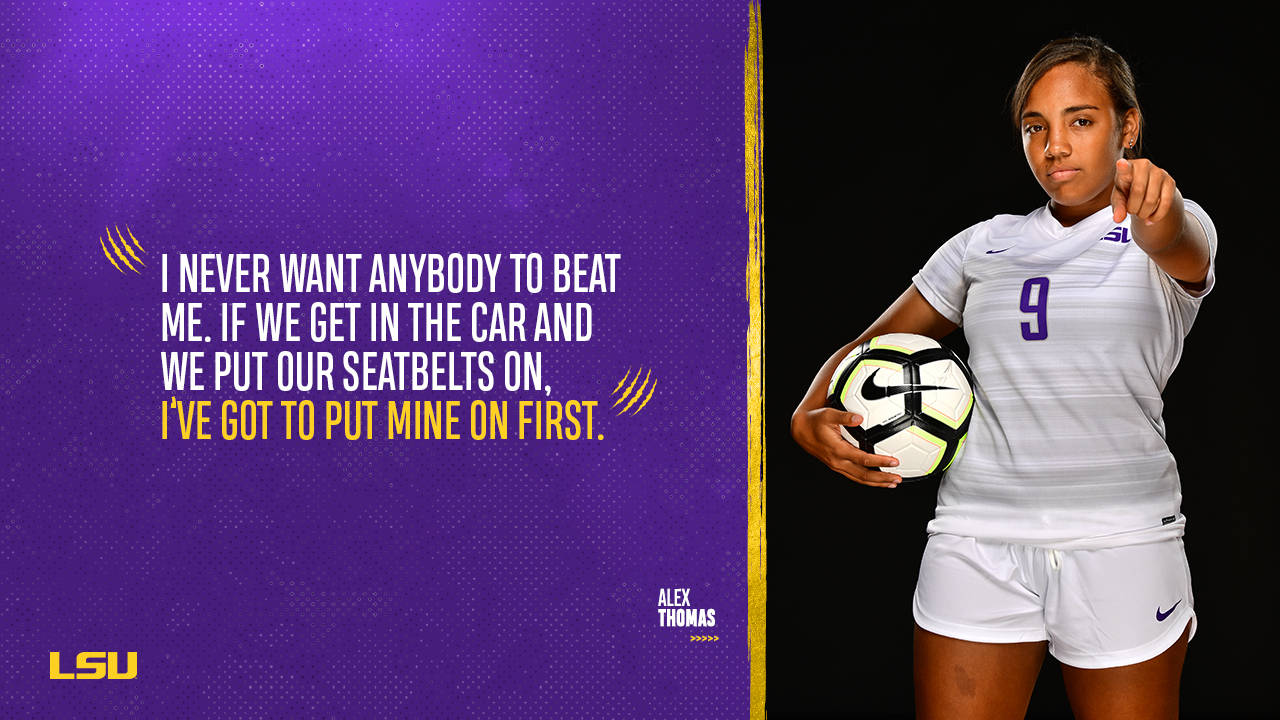 There’s no slowing down Alex Thomas.

It doesn’t matter if she’s leading the line as a forward in the opening seconds of a match or bombing up the right flank from fullback in the 90th minute; if she’s cramming for the MCAT or explaining, from memory, the life cycle of the parasite Trypanosoma cruzi.

“I never want anybody to beat me,” says Thomas, a senior fullback for LSU’s soccer team. “If we get in the car and we put our seatbelts on, I’ve got to put mine on first.”

The competitive nature that makes it possible for Thomas to maintain top speed at all times came from her mother, who, Thomas says, “made everything a competition.”

That includes who could get dressed fastest in the morning and actual footraces. Those stopped once Thomas turned 12, because, she says of her mother, “she won, and she knew she could never win again.”

Perfection is not attainable, but if we chase perfection we can catch excellence

That edge is just one of the qualities that make the senior invaluable to head coach Brian Lee.

“If you see us play in the last five or 10 minutes of a game, she’s the one blowing past people,” Lee says. “If the game’s tied or we’re down a goal, that’s when it really surfaces.”

It also surfaces in the classroom. Take Mondays, for example, normally an off-day from soccer. Thomas, a pre-med student, is in class from 8:30 until 5:30 with no breaks.

She crams – food and homework – from 5:30 to 7:30, when she heads to her three-hour MCAT prep course. Then, it’s more homework and sleep for 9 a.m. classes Tuesday.

“Relaxing for me is playing soccer,” she says. “That’s when I can have fun, let loose, stop worrying about the MCAT and classes.”

Her versatility is just as valuable to her team as her desire to win. When the Tigers needed a right back her freshman season, Thomas – a prolific goalscorer out of Benjamin Franklin High School and the top signee from Louisiana in Lee’s tenure – made the move from the front line to the back, quickly settling in despite being a lifelong striker with, in her words, “literally no experience” in defense.

“You have a lot more space and time at fullback,” she says. “You’re facing the field. You don’t have defenders on your back. I like attacking, one v. ones. Out wide, it’s a perfect scenario for how I like to play, what I’m good at.”

After two seasons at the back, Thomas returned to forward as a junior, leading the team in scoring and entering her senior season set to lead the line again.

“We got to preseason with a plan to play her up front, but we had another need at the back,” Lee says. “It really makes us a unique team because of the way she can attack out of defense.”

Thomas has always preferred scoring goals to preventing them. Despite some initial resistance, conversations with Lee, her mother, and her friends convinced her to accept the return to right back for her senior season.

“All in all, as a soccer player, looking at it with no bias, I’m a better outside back than I am a forward,” she says. “I decided to embrace it. Ever since then, I’ve grown to love it again.”

Now, Thomas hopes to lead LSU back to the SEC and NCAA Tournaments. Whether that’s from the front or the back doesn’t matter.

She’s finishing her career the way she’s enjoyed it all along – full speed ahead.

“My goal is to have no regrets when I step off the field the last time,” she says. “For everyone on the field, in the stands, on the bench to look at me and know, ‘She gave everything she had.’ All the sacrifices my mom made, nothing that happened in the past was taken for granted – I gave it everything, and everybody can be proud of me for that.”