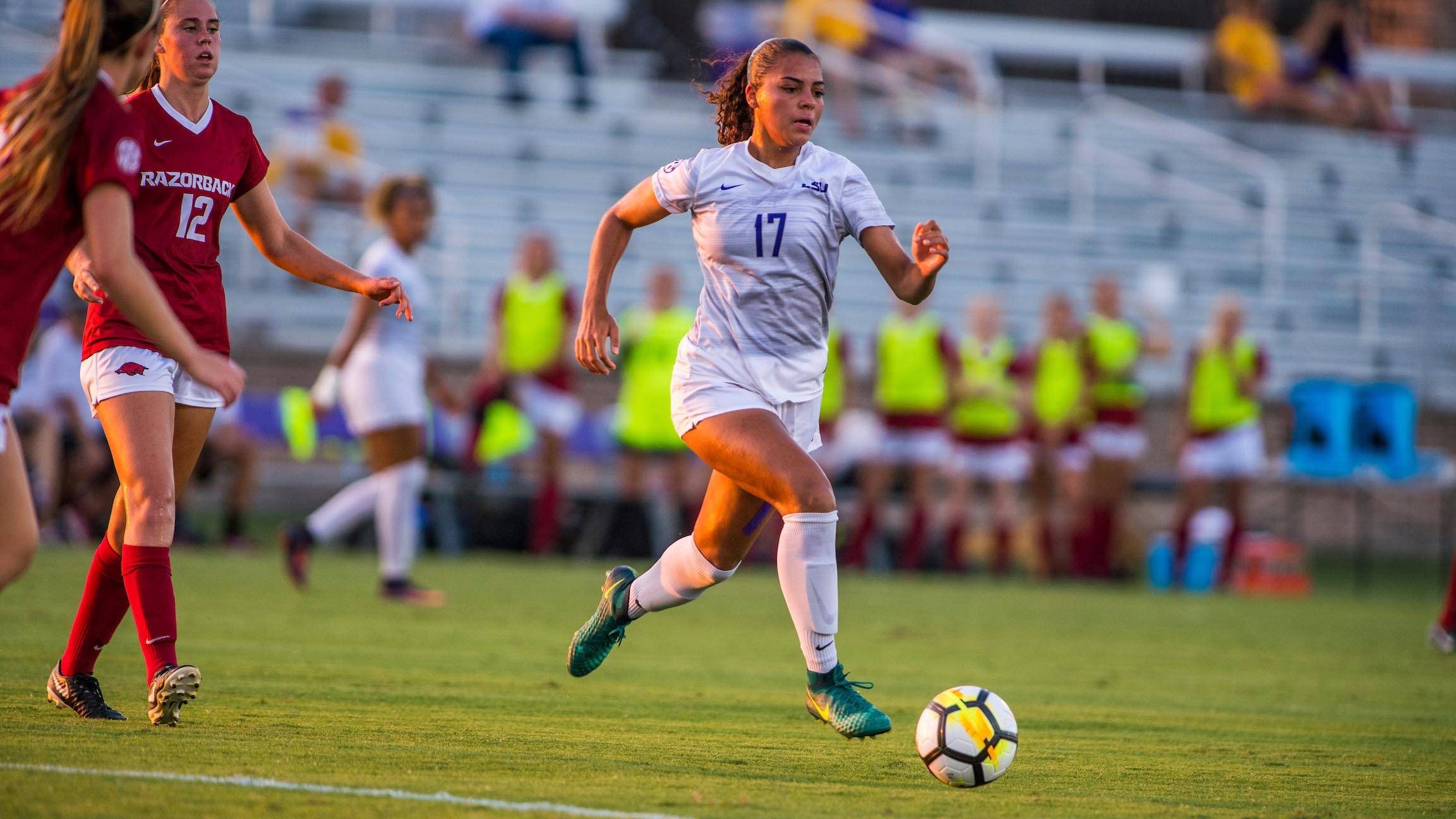 Cincinnati, Ohio – Two second half goals by the Cincinnati Bearcats within a four-minute stretch proved to be deciding factor on Sunday as the Bearcats downed the LSU soccer team 2-1 at Gettler Stadium. The loss dropped LSU to 6-3-0 on the season while Cincinnati improved to 5-3-1.

Caffey Gets The Tigers on the Board

Tiana Caffey scored her first-career goal in the 28th minute of the match to give LSU a one-goal advantage. Her goal was scored on the second of two corner kicks that the Tigers earned in a 20-second span. The sequence all started when Shannon Cooke‘s shot from the left side of the 18 was blocked and went out of bounds. Marlena Cutura took both corners and the second one was initially touched by a Bearcat defender before Caffey took her left-footed shot from five yards out that gave the Cincinnati keeper no chance.

In the 54th minute of play Bri Costagan crossed a ball in and after a scramble in the box for the loose ball Jill Vetere ended up with it and put it in the back of the net; it was Vetere’s second of the season. Less than four minutes later in the 58th minute, a cross in by Sydney Kilgore was initially deflected and a mad rush for the loose ball in the box ensued. After a couple of whacks at it by both teams, Julia Abbott claimed the ball and her shot from point-blank range gave Cincinnati a 2-1 advantage.

LSU responded well after falling behind by one. The Tigers registered nine shots, six of which had to be saved in the final 25 minutes of play. Alex Thomas‘ shot in the 65th minute of play from the top of the 18 was saved by Madison Less. Thomas’ shot was the first of eight shots and two corners taken by the Tigers in a five-minute span. Cutura’s first corner of the sequence almost found Abbey Newton but Less did a good job to punch it away. The second corner was cleared away. The Tigers tested Less with two more brilliant shots and she was up to the task. She had to make leaping saves on Adrienne Richardson‘s (68th minute) and Tinaya Alexander‘s (77th minute) shots. Thomas had one last good look at the goal in the 87th minute after she disposed of two Cincinnati defenders but her shot from inside the right portion of the box was scooped up.

First Half Comes to a Close

With less than 15 seconds remaining in the first half, Tinaya Alexander launched a shot from 50 yards out and it gave the goal a scare. Less, the Cincinnati keeper, had to backpedal to jump and save Alexander’s shot. Less could not corral the ball and Lucy Parker found herself as the recipient of the rebound, but with time running down on the clock, Parker’s rushed shot from six yards out was saved by Less.

LSU will host No. 9 Auburn on Thursday night at LSU Soccer Stadium with first kick set for 7 p.m.