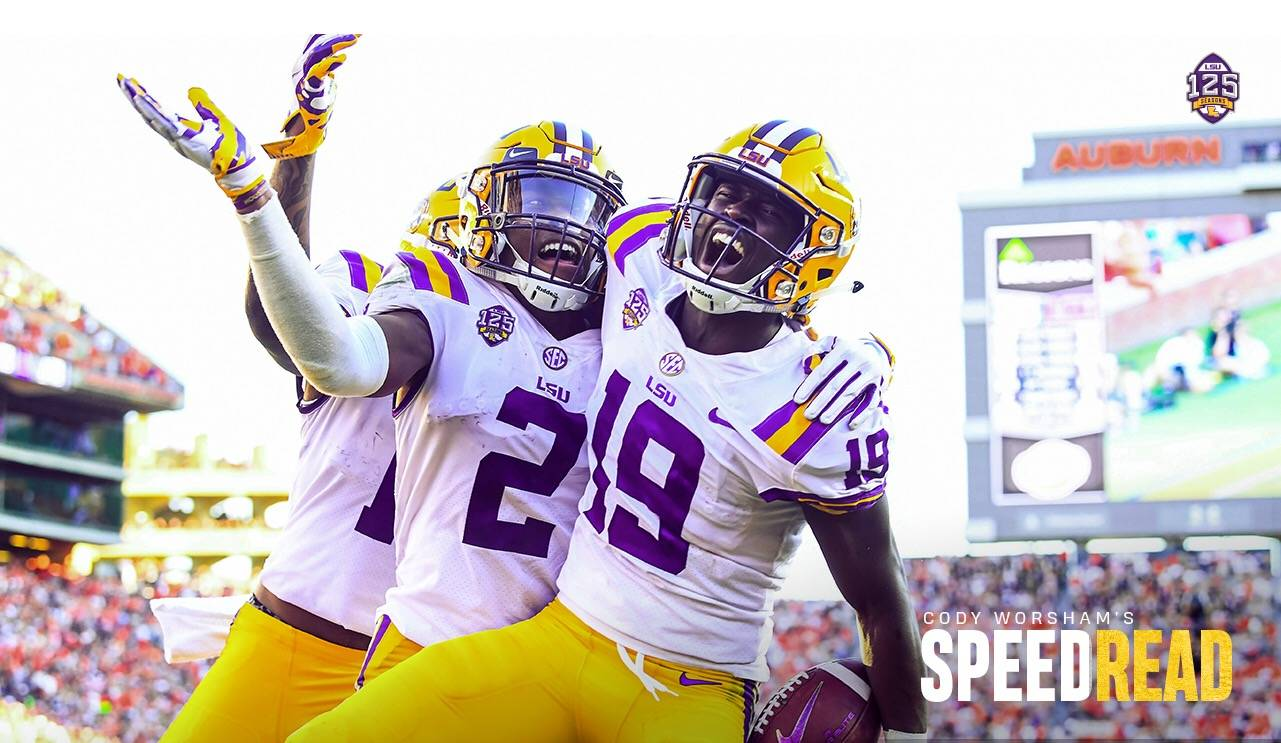 The Drive: Victory for LSU

LSU’s game-winning drive went perfectly according to script, eating up all the clock the Tigers inherited when Auburn punted the ball back with 5:38 to go after the third 3-and-out of the day forced by the defense.

Joe Burrow came up particularly clutch, completing a third down, a fourth down, and rushing three times.

After Justin Jefferson drew the final pass interference of the drive, LSU milked the clock expertly so that no time left after Tracy’s winner.

“There was no question in my mind he was going to make this field goal,” said head coach Ed Orgeron. “It worked out perfectly.”

The win was by no means easy for the Tigers. They let a 10-point lead slip away and had to battle injuries, scorching heat, a sometimes-stalling offense, and a talented opponent inspired by a raucous crowd.

It’s exactly what they expected, though: the adversity, and the ability to overcome it.

Derrick Dillon‘s first career touchdown came in a huge moment for the Tigers. Down 21-13 with 8:30 left, the junior found a miniscule hole in the Auburn zone, and Joe Burrow somehow found him, delivering an inch-perfect pass into Dillon’s hands. The receiver did the rest, racing to the endzone to pull the Tigers within 21-19.

“That play sparked us,” said Burrow.

“It gave us a chance to win the game,” said Orgeron.

For Burrow, it was a redemptive moment. He was unhappy with his play up until that point and knew he needed to make something happen for his team.

“I didn’t play great,” said Burrow, who finished 15-for-34 with 249 yards and the score. “Especially in the first half, I missed some throws I usually make. We should have been up two or three touchdowns. I just missed throws. My guys kept trusting me, my coaches kept trusting me.”

Orgeron said afterward Burrow’s play showed what he’s seen all along in the grad transfer.

“He showed today he’s a competitor,” said Orgeron. “Things weren’t always good. He competed his butt off. He played well. He didn’t play great, but he played well. He’s 3-0 as our starting quarterback, and that’s pretty good.

“He’s going to make the right plays. He’s not going to panic. When you have a quarterback that can do that with athletes, you’ve got a chance.”

Greedy Williams put it even better.

“Joe proved everything people said they didn’t see out of him,” said Williams. “Tonight made him one of the best quarterbacks in the SEC, from what I’ve seen. He played in a big-time game, made big-time throws. What else do you want out of a quarterback?”

This stood out to me today: Joe Burrow and Cole Tracy spoke about their back ups – Myles Brennan and Connor Culp – as their biggest fans. Guys who might start if not for them transferring in, but the first to greet them every time they come to the sideline. #OneTeamOneHeartbeat

The Stoppers: Grant and Greedy

Safety Grant Delpit continued his sensational sophomore season with another impressive outing Saturday. Delpit was all over the field against Auburn. He started the game with an interception on the second play from scrimmage. He saved a touchdown in the second half on a Jarrett Stidham run then knocked back JaTarvius Whitlow for a loss on the next snap. For the game, Delpit led the way with 10 tackles, one for loss, and the interception.

“That guy is great,” said Greedy Williams. “Coming in as a freshman, I knew he was great. Grant Delpit: his name speaks for itself.”

Williams wasn’t bad, himself. The sophomore’s third quarter interception, the eighth of his career, put a halt to Auburn’s surging momentum and helped LSU win the turnover battle once again.

The appropriately named Greedy Williams with a huge pick for @LSUFootball. pic.twitter.com/LIWvaY8EXm

“Test me one time, he made a catch,” said Williams. “Test me two times: bad throw, interception, LSU ball. So, don’t throw at me, every quarterback we play.”

Sophomore receiver Justin Jefferson enjoyed a career day, and it took him less than a half to get there. He eclipsed his previous career high of 81 receiving yards – set in the season-opener against Miami – early in the second quarter and finished the game with 97 yards on five receptions.

His best of the day was tiptoeing effort on the right sideline in the second quarter, as he elevated to grab a Joe Burrow toss and managed to get a foot down just inside the boundary. He also drew the pass interference that set up the game-winning kick.

“The defense was playing man,” said Jefferson. “It was just me and the corner. I went around him, and I was wide open. Joe threw it, I caught it. It’s about making big plays.”

Jefferson grew up watching these LSU-Auburn battles. Both of his brothers, former LSU quarterback Jordan Jefferson and former safety Rickey Jefferson, have been here before. For Justin, getting a win in Jordan-Hare has been a long time coming.

“I’ve been watching these games for a long time,” Jefferson said. “To come here and play at Auburn and get a win, that’s big time. I used to come here when Cam Newton was here. It was just exciting.”

“Those who are against us and doubt us, thank you. We do read the media, as players, and see the things y’all say. Thank you for the powerful, encouraging words you said to us always, because that only gives us motivation to come out and do what we did.” – Greedy Williams

That’s both a figure of speech to describe the field goal kicker’s clutch accuracy, but it’s also quite literal to Assumption College, his former school.

Tracy said after the game the vice president of the university contacted him and told him LSU fans have donated $500 to the school since he’s started booting in three-pointers in Baton Rouge.

“I thought that was pretty funny,” Tracy laughed.