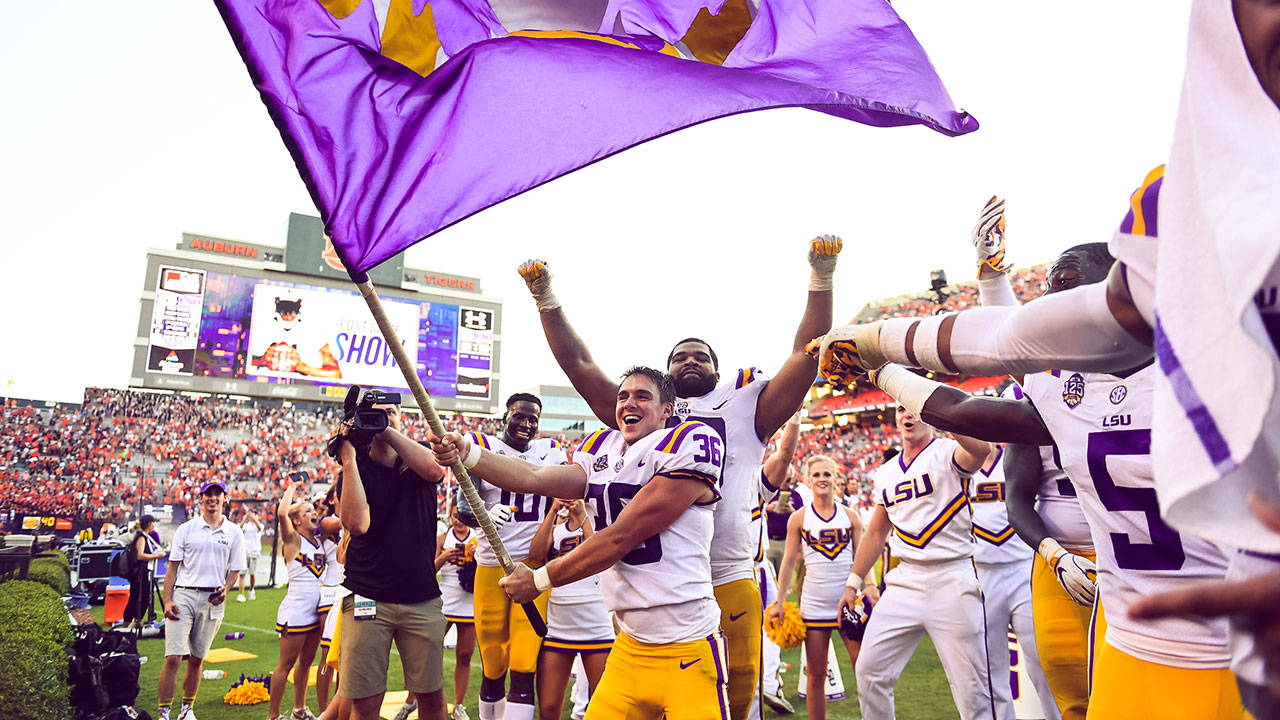 The Tigers will return home to face Louisiana Tech (2-0) on Saturday, Sept. 22, at 6 p.m. CT. Tickets are available at www.LSUtix.net. The game will be televised by ESPNU and broadcast on the LSU Sports Radio Network starting at 4 p.m.

LSU quarterback Joe Burrow, a transfer from Ohio State, earned his first SEC victory in one of the most hostile environments, as the visiting Tigers won at Auburn for the first time since 2012.

On the final drive of the game, he led the Tigers on a 14-play, 52-yard drive that used the final 5:38 of the clock and ended with Tracy’s 42-yard field goal that split the uprights with the clock at 0:00.

The walk-off field goal was LSU’s first in regulation since at least 1941.

Running back Nick Brossette led LSU with 69 rushing yards on 19 carries, while Burrow had 22 net yards on 10 carries including two sacks (NOTE: in box score at publication, only one sack was credited to Auburn). Wide receiver Justin Jefferson had a team-best 97 yards on five catches, while Dee Anderson added 41 yards on three grabs including a key first-down catch-and-stretch to keep LSU’s final drive alive.

Tracy, a senior graduate transfer from Division II Assumption College (Mass.), made 3-of-4 field goals with makes from 33, 27 and the game-winner of 42 yards. The miss – his only in nine attempts in 2018 – was from 53 yards in the first quarter.

Save 21-straight points by Auburn in a 10-minute segment of the game spanning the second and third quarters, LSU’s defense controlled the game. Auburn was held scoreless in the first 24:54 and the final 25:38 of the game.

Safety Grant Delpit led LSU with 10 tackles, while linebackers Devin White and Jacob Phillips each had eight. Both Delpit and Greedy Williams had interceptions.

Quarterback Jarrett Stidham led the Auburn offense, completing 16-of-28 passes for 198 yards with a touchdown and two interceptions. Redshirt freshman JaTarvious Whitlow had 104 rushing yards on 22 carries with a 7-yard touchdown run, while back Shaun Shivers had 25 yards and a 7-yard score. Darius Slayton caught a 4-yard touchdown pass on third-and-goal to give Auburn a 21-10 lead with 10:38 left in the third quarter.

LSU won the coin toss, and deferred its decision until the second half. Auburn received the opening kickoff, defending the south endzone.

The game turned in favor of the visiting Tigers after only two plays, as LSU safety Grant Delpit stepped in front of a Stidham pass and created a turnover at the Auburn 34.

LSU took advantage of its defense’s takeaway, marching to the Auburn endzone with a nine-play drive that included three third-down conversions. Running back Clyde Edwards-Helaire took a direct snap and ran for a 1-yard touchdown to give the Tigers a 7-0 lead with 9:59 left in the first quarter.

Midway through the quarter, Auburn used a 20-yard reception by wide receiver Darius Slayton and a face-mask penalty to advance near midfield. A 28-yard catch by wide receiver Anthony Schwartz moved Auburn to the LSU 24, however, three-straight rushes netted nine yards to the 15 and Auburn rolled the dice. On fourth-and-1, LSU linebacker Devin White came through with a tackle behind the line of scrimmage and a turnover on downs.

LSU’s attempt to take advantage came up short when Tracy missed his first field goal attempt of the season, albeit from 53 yards.

An 8-yard sack of Stidham split by LSU’s Andre Anthony and Michael Divinity Jr. led to an Auburn punt to the LSU 11. Edwards-Helaire earned a first down with a short run to the LSU 22, where Burrow completed a 33-yard back-shoulder throw to Jefferson to the Auburn 45. A first down on an 11-yard run by Brossette and a pass interference penalty by Auburn gave LSU first-and-10 at the Auburn 18. However, the drive came to a halt when a false start was called on fourth-and-1.

Auburn used tempo to find its offensive rhythm midway through the second quarter, mixing five runs and five passes to score for the first time. The 75-yard drive was capped by a 7-yard run by Whitlow. Auburn trailed 10-7 with 5:06 to play in the half.

LSU gave the ball back after only three plays, as Zach Von Rosenberg punted 49 yards and Auburn took over at its 34.

On the ensuing drive, a roughing-the-passer penalty on third-and-8 against LSU’s Anthony kept Auburn on the field. The play restored Auburn’s momentum and the home-standing Tigers scored on a 7-yard run by Shaun Shivers.

Auburn led for the first time, 14-10, with 1:31 left in the quarter and would take that lead into the lockerroom.

LSU outgained Auburn in the opening half, 191-179. LSU was charged with eight penalties for 76 yards in the first 30 minutes.

On the first possession of the second half, LSU gained two first downs the Auburn 45 when a third-down pass by Burrow sailed out of Ja’Marr Chase‘s reach. Von Rosenberg entered to punt, but instead tucked the ball and ran toward the line of scrimmage. He raised up, jumped, and tossed a pass just over tight end Foster Moreau‘s head.

Auburn cashed in on LSU’s gamble by adding seven more to its 21-point run, as Stidham connected with Slayton from 4 yards to push Auburn’s advantage to 21-10 with 10:38 left in the third quarter.

LSU finally broke its scoring drought on its next drive, though the Tigers weren’t able to get seven points back. A 20-yard catch by Anderson turned into a 35-yard gain when a face-mask penalty was called. Following a 7-yard run for a first down by Brossette, wide receiver Jonathan Giles drew a pass interference penalty that gave LSU first-and-goal at the 8. When three plays netted one yard, LSU settled for a 27-yard Tracy field goal and trailed 21-13 with 3:58 to play in the third quarter.

Preseason all-America cornerback Greedy Williams‘ second interception in as many games gave LSU possession at its 47 following a 20-yard return. But, LSU went three-and-out and punted.

A missed 52-yard field goal by Auburn gave LSU possession at its 35, but, Burrow’s third-and-3 run was stopped short and Von Rosenberg punted to the Auburn 9.

Pinned toward its goal line, Auburn gained only one first down before and punted.

On the first play of the drive, Burrow got perfect protection and found Dillon streaking across the middle of the field. Burrow’s lofted a pass just over the linebacker and into Dillon’s hands in stride. Dillon sprinted untouched to the Auburn 10 before dodging a tackle and completing a 71-yard catch-and-run for a touchdown.

LSU trailed 21-19 when its two-point pass attempt to Jefferson fell incomplete in the back of the endzone.

A holding call on Auburn was key to LSU getting the ball back quickly, as Arryn Siposs punted 46 yards to Giles at the LSU 24.

With 5:38 to play, Burrow and the Tigers gained two first downs with a penalty and an 8-yard pass to Anderson. LSU crossed midfield with a 6-yard run by Burrow. However, after taking a 4-yard loss on a run by Burrow, the junior transfer completed a contested fourth-and-7 pass to Stephen Sullivan to the Auburn 39.

On second down, Auburn’s Jamel Dean was called for interference on Jefferson, giving LSU a first down at the Auburn 24. On third-and-7 from the Auburn 21, Auburn called its final timeout with 28 seconds to play. LSU handed the ball to Brossette, who was met in the backfield to setup the game’s final snap from the 24 yard line.

Tracy’s 42-yard field goal was perfect, sending the visiting Tigers onto the field in celebration – eventually catching the senior placekicker and starting a dogpile.

ARE YOU NOT ENTERTAINED? pic.twitter.com/kqL8NHyJxk