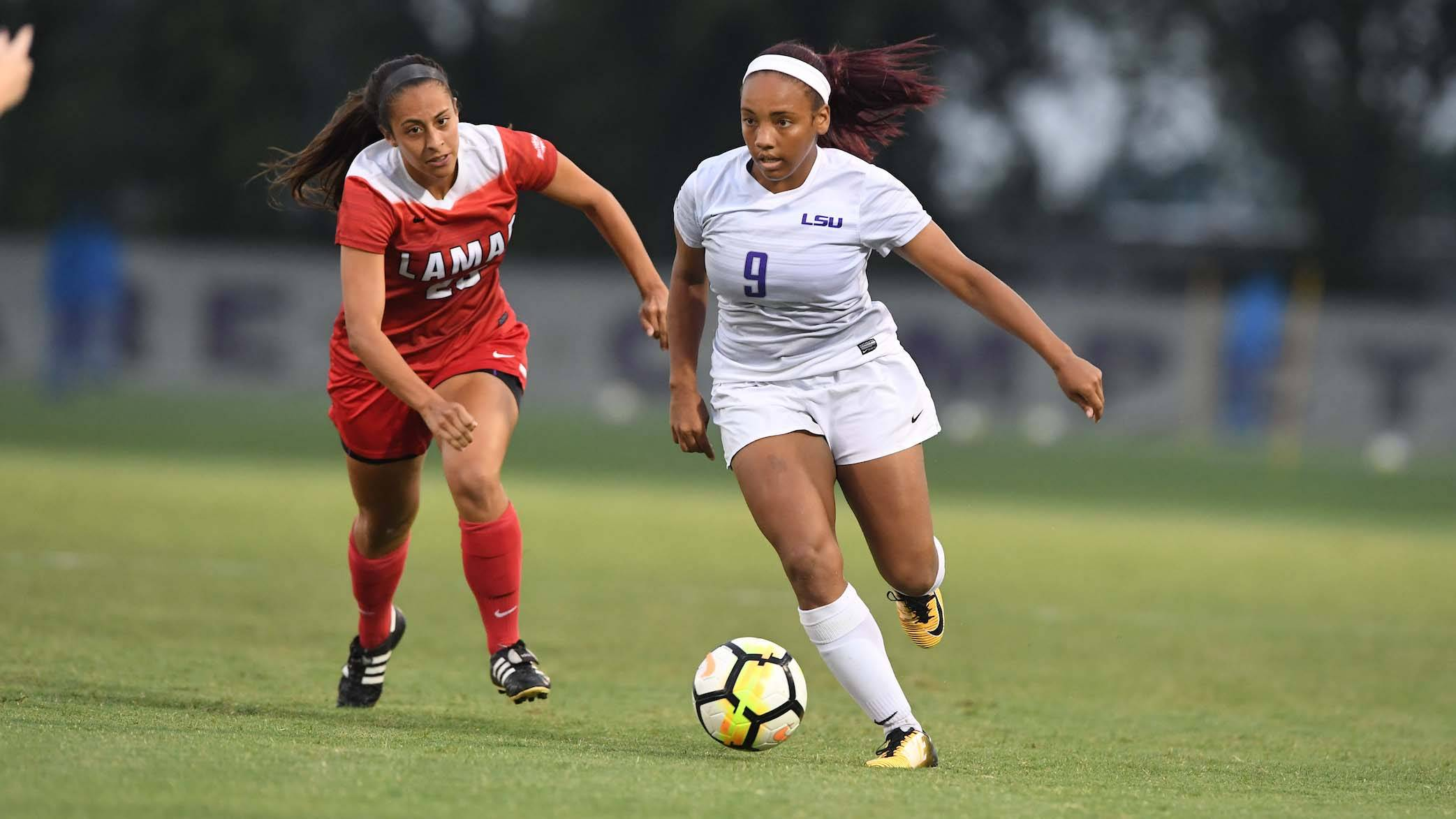 .@LSUBrianLee on the promising play from our group this evening and the quick turnaround for Sunday’s match at Cincinnati. pic.twitter.com/4Ejc1Z9vIi

Chiara Ritchie-Williams was called for a foul in the box and Texas A&M’s Addie McCain cashed the penalty kick in to score the first goal of the game. The goal came 18:59 into the game and ended LSU’s six-plus game shutout streak at 558 minutes and 59 seconds. The streak of 558:59 is the second longest in LSU history. The school record happened in 2002 and that streak lasted 597 minutes.

Just a short time after the penalty kick goal, Texas A&M’s free kick from just inside the midfield line found the back of Grace Piper’s head and her redirection was enough to sneak past Caroline Brockmeier to give the Aggies a two-goal lead in the 22nd minute of play.

The Aggies cashed in their fourth and final corner kick of the game in the 81st minute of play when Kendall Ritchie found Rheagen Smith who proceeded to head it home. The Tigers played much more composed in the second half and actually outshot the Aggies 9-7 in the second 45 minutes of play.

LSU’s best chance of the evening came in the 76th minute of play. With Alex Thomas streaking down the right side of the pitch, she dribbled her way inwards towards the top of the 18 after losing an Aggie defender and her left-footed curling shot short hopped the Texas A&M keeper and initially snuck by her. With little to no mustard left on the shot, the Aggie keeper was able to turn around and stop the ball before it crossed the goal line.

In the last 10 minutes of play, LSU had three quality opportunities. Lucy Parker‘s free kick from about 28 yards out was moving left but it was saved by the keeper. In the 83rd minute of play, freshman Molly Thompson made a move in the right side of the box and sent it off to a cutting Adrienne Richardson. Richardson’s shot from nine yards out was blocked by Texas A&M and it gave LSU its first corner of the game. Richardson rifled off another shot in the final minute of the game and it was saved by the Texas A&M keeper.

Less than 20 minutes into the second half LSU had two good attempts at the net in a four-minute span. Richardson’s shot from 28 yards out went wide left and scared the keeper in the 57th minute, and Marlena Cutura took an ambitious rip from 30 yards out in the 61st minute that went just a bit high.

Shannon Cooke accounted for 2 of LSU’s three shots in the first half. Her right-footed attempt from about 23 yards away was cleaned up by the Texas A&M keeper in the 28th minute of play. That was LSU’s only shot on goal of the first half. Early on in the sixth minute of play Chrissy Pitre possessed the ball down the right side of the pitch and her ground cross made it through the Aggie backline, but it was just out of the reach of a streaking Richardson.

LSU will travel to Cincinnati, Ohio, on Sunday to wrap up its nonconference schedule with a match against Cincinnati (4-3-1) at 12 p.m. CT.