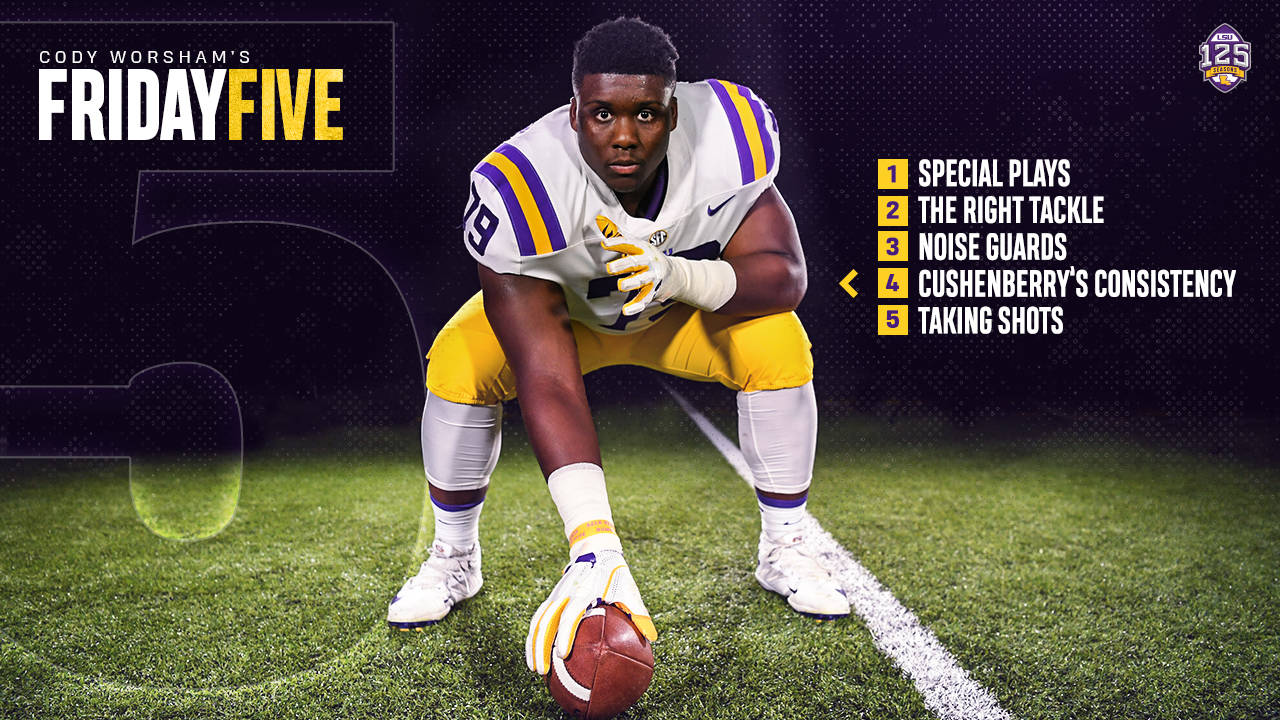 The Friday 5 comes your way every Friday, following Ed Orgeron‘s Thursday evening press conference previewing the weekend’s upcoming matchup. This week, the focus is up front and the third phase.

After struggling in the third phase much of last season, LSU’s special teams units are much improved in 2018 under first-year coordinator and longtime NFL assistant Greg McMahon. LSU ranks in the top 20 nationally in field position margin and field goal kicking after two games.

“And we’ve seen some crazy things happen in these games, right til the last second” Auburn Week! #GeauxTigers @LSUfootball pic.twitter.com/RhMux84uEz

“A punt return last year broke the game open. Something’s going to happen on special teams that’s going to help us win the football game one way or the other. I just can’t tell which way it’s going to be.”

There’s news along LSU’s offensive line, as Orgeron announced Austin Deculus would start at right tackle. He will replace Badara Traore, who earned his first start at the spot last week. Deculus’ experience picked up through playing in all 13 games last season, including three along the offensive line, helped him land the starting role.

“We played three freshmen against Florida and beat them (last year),” Orgeron said. “Austin was one of them. I have confidence in him. He’s not there yet, but he’s more experienced than Badara, and we can do more things with him.”

Heading to Jordan-Hare Stadium means coping with the noise known to be a factor in SEC road games. LSU has practiced with crowd noise all week, and quarterback Joe Burrow joked Monday he would sleep with crowd noise pumping through his headphones at night.

The key, Orgeron says, is how the offensive line handles it.

“It’s a big emphasis for our offensive line,” he said. “We have to be on the same page. It’s critical for us. We had some noise this week. It looked like it was no problem. But you can never tell until you get in the game. We’re going to work through it, just like the Miami game. We had some problems, we worked through it, and that’s where having an experienced quarterback can do.”

Critical to those in-game adjustments up front is center Lloyd Cushenberry. The sophomore is known among his teammates for his incredible memory and intelligence, and Orgeron credited Cushenberry for his dependable play this season.

“Lloyd’s been probably the most consistent lineman this year,” Orgeron said. “He’s played well. He’s smart. One of the things Lloyd can do is make the calls, do all the things a good center needs to do. I’m very pleased with his play so far.”

Orgeron said Wednesday on his radio show he’d like to take eight shots downfield per game. It’s something he and offensive coordinator Steve Ensminger picked up this offseason from New Orleans Saints head coach Sean Payton, but protection issues up front have limited the team’s ability to take those shots in games so far.

“Have we done that yet? No. But it’s something we want to do,” Orgeron said. “We’d like to take two shots per quarter.”