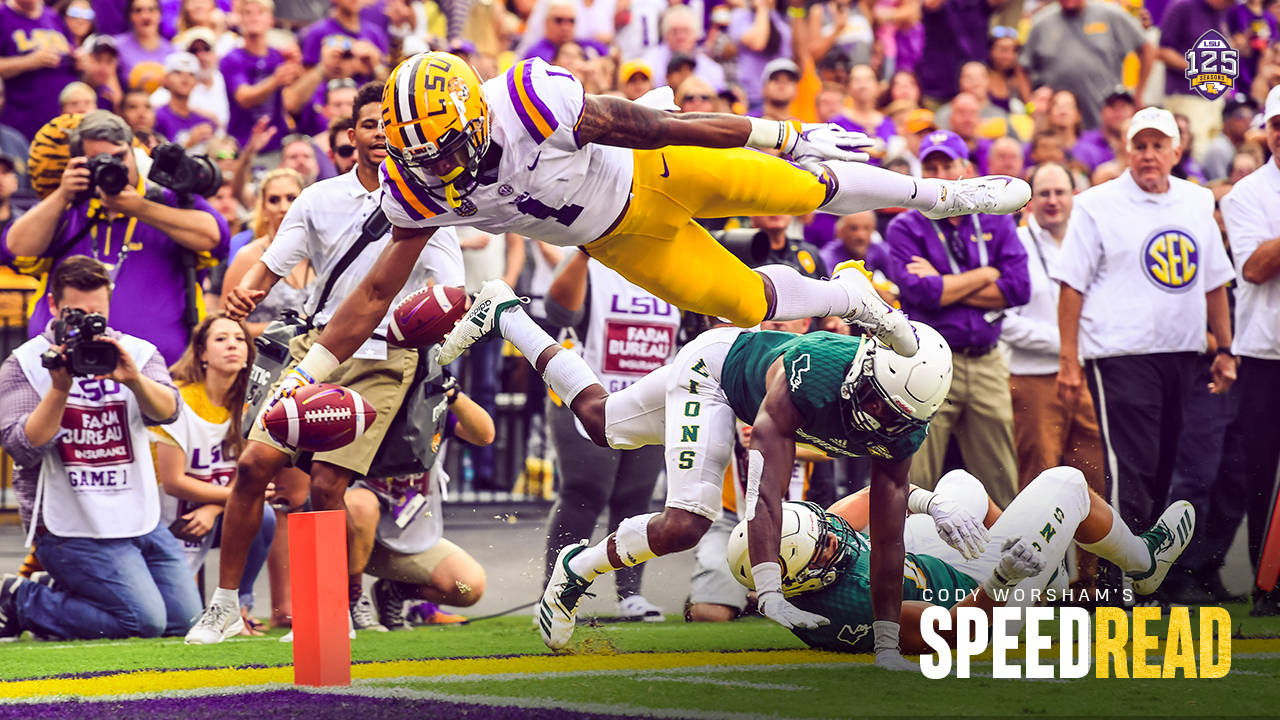 A 31-0 win over Southeastern kept LSU’s 2018 record unblemished, but the win wasn’t quite perfect, providing the Tigers with positives to build on and plenty of room for work heading into Saturday’s SEC opener at Aubrn.

The Tigers showcased some of the new looks in Steve Ensminger‘s offense, particularly on the first two touchdowns of the night.

The first saw quarterback Joe Burrow execute a Run-Pass Option (RPO) just the way it’s drawn up. While the offensive line blocked for a Nick Brossette power run, Burrow read the Southeastern defense and opted for the quick pass to Ja’Marr Chase. The freshman wide out did the rest, showcasing his agility and athleticism to shake a Lion defender and leap into the end zone for his first career receiving score.

“I saw the corner off to the boundary,” Burrow said, “so they gave me a little out throw. I took it, and Ja’Marr made a good move on the corner and made the rest happen.”

There was more up Ensminger’s sleeve early. The Tigers’ second touchdown came courtesy of two novel tactics in the Tigers’ playbook: hurry up and zone read. Following a Clyde Edwards-Helaire carry on second down, Burrow and the Tiger offense hurried to the line of scrimmage on third and goal. They then dialed up a zone read, which Burrow kept and carried the final yard for his first career rushing touchdown and a 17-0 LSU lead.

It’s a play LSU has practiced countless times on Mondays and Thursdays. Too far out for a last-second field goal and with no time for anything else, the Tigers dialed up a Hail Mary on the final play of scrimmage of the first half. Burrow lofted a perfect ball to the end zone, and 6-foot-7 junior Stephen Sullivan went up over a handful of defenders to make the grab for a 40-yard touchdown.

“We practice that all week,” said Sullivan, who had a career-high 54 receiving yards. “I was used to it. It was just like practice.”

Ed Orgeron highlighted Sullivan – whose teammates call him Phony, a play on his first name – as a player he wanted to get involved more going forward.

“I really like Stephen,” Orgeron said. “I think Stephen’s an excellent player. I look forward to us getting the ball in his hands more.”

Burrow took several solid licks on the night, both in the pocket and while scrambling. Like his predecessor Danny Etling, he’s not one to hit the turf for protection when there are yards to be gained.

His head coach might advise otherwise this week in practice.

In keeping Southeastern scoreless, LSU posted its first shutout in Tiger Stadium since Sept. 13, 2014 against UL-Monroe. That marks the first home shutout in Dave Aranda‘s tenure. Here’s what we saw from the defense:

Enjoyed this exchange with Greedy Williams on his pick:

GW: “I wasn’t expecting any passes thrown my way. I guess the QB made a bad read.”

Me: Is it ever a good read when a QB throws your way?

GW: “Never. No receiver is ever open.”

After just 78 second half yards, Orgeron lamented the team’s offensive showing, saying there’s plenty of work to be done before the Tigers head to Auburn next weekend.

“We’re just out of sync a little bit,” Orgeron said. “Their defensive line was penetrating. We couldn’t protect Joe. When we did protect Joe, we dropped some balls. We just weren’t very good on offense tonight.”

Senior guard Garrett Brumfield was blunt about the performance after.

“You don’t want anyone to touch your quarterback,” he said. “Whether it’s scheme, protections, somebody getting beat…you want to eliminate those things so your quarterback doesn’t get it. Of course, we don’t want Joe to get hit. We’ve got to work out any kinks we have to people don’t get on our quarterback.”

On the night, Burrow was officially hurried once, sacked twice, and had seven passes broken up, more than one of which came as defenders crashed into him mid-throw. LSU was without starting right tackle Adrian Magee (injury) and starting left tackle Saahdiq Charles, who did not dress.

“Obviously we missed Saahdiq,” he said. “We missed some balls. We couldn’t protect. They were all over Joe. There was a lot of missed assignments and protections, times we got beat one-on-one.

“I thought we’d play a lot better offensively. I thought the game would be a lot cleaner. Obviously, it wasn’t. We’ll have to go back and look at it and get better.”