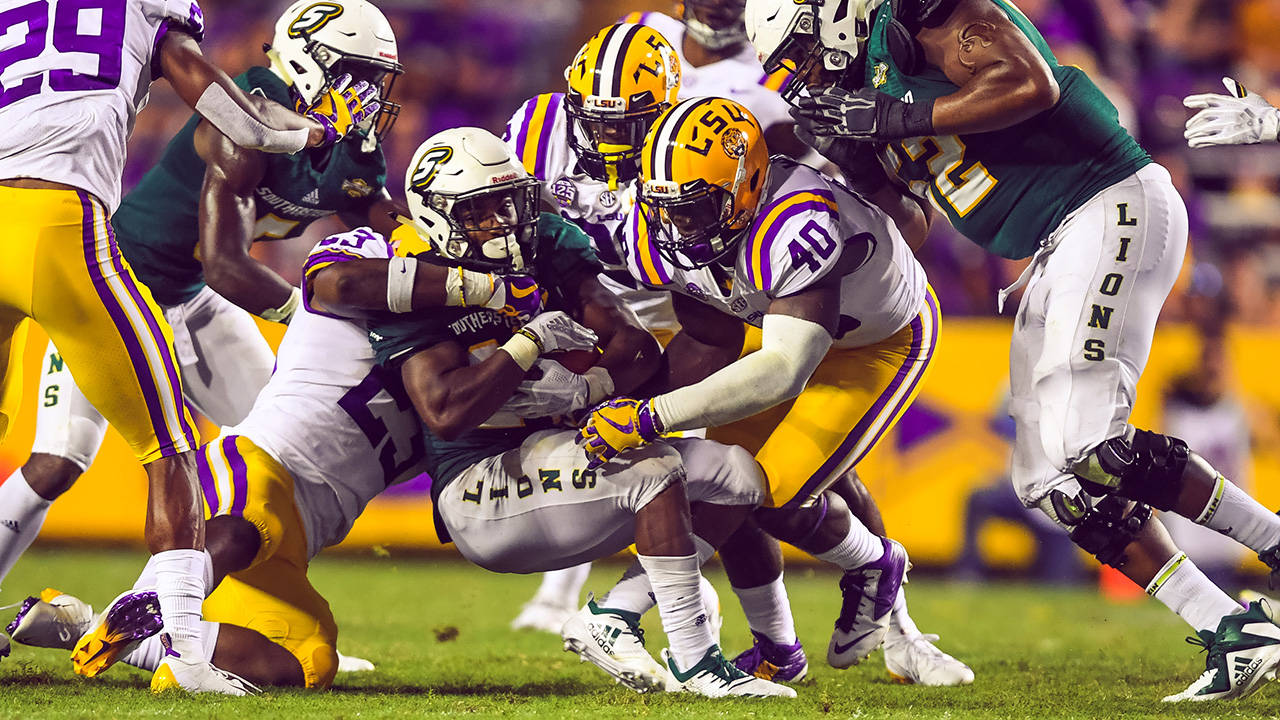 Along with its stellar defensive performance, LSU was led by running back Nick Brossette, who had 137 of LSU’s 184 net rushing yards on 19 carries. Quarterback Joe Burrow completed 10-of-20 passes for 151 yards with two touchdowns. Burrow also ran for a touchdown, as did running back Clyde Edwards-Helaire.

LSU placekicker Cole Tracy continued his perfect start in 2018, as the senior transfer made his only attempt from 50 yards. He’s made all five of his field goals and all seven of his PATs.

Defensively, the Tigers shined. Linebacker Devin White recorded his ninth double-digit tackles game with a team-high 11, while true freshman Micah Baskerville made his debut and added six tackles in relief of Jacob Phillips. Phillips was ejected for targeting late in the first half.

LSU had 10 tackles for loss in the game.

Greedy Williams picked up his first interception of the season and added three tackles.

LSU grabbed a 7-0 lead with 7:15 remaining in the first quarter when quarterback Joe Burrow connected with freshman wide receiver Ja’Marr Chase on a nine-yard touchdown pass. The aerial was the first TD throw of Burrow’s LSU career and the first scoring reception of Chase’s collegiate career.

The score culminated a 34-yard drive that began after linebacker Andre Anthony recovered an SLU fumble that was caused by linebacker Devin White.

After a three-and-out by the Southeastern offense, LSU drove 46 yards in seven plays with the march ending on Burrow’s one-yard TD run, giving the Tigers a 14-0 lead at the 3:20 mark of the first quarter.

LSU increased its advantage to 17-0 with 11:21 remaining in the first half when placekicker Cole Tracy nailed a 50-yard field goal, his second 50+ yard three-pointer of the season. The kick finished a 28-yard, eight-play drive for the Tigers.

Tracy became the first LSU kicker since Colt David in 2008 to make 50+ yard field goals in consecutive games. The kick was the first 50-plus yard field goal by LSU in Tiger Stadium since Nov. 13, 2010, when Josh Jasper converted versus Louisiana-Monroe.

Burrow hit wide receiver Stephen Sullivan on a 40-yard Hail Mary touchdown pass on the final play of the first half to give LSU a 24-0 lead at intermission. The play culminated a 96-yard, seven-play march and marked the second career TD reception for Sullivan.

SLU mounted a scoring threat early in the fourth quarter, advancing to the LSU 21-yard line, but cornerback Greedy Williams picked off a Chason Virgil pass at the Tigers’ 6-yard line to stymie the drive.

LSU was unable to pick up a first down from deep in its territory and punted to Southeastern Louisiana. Taking over at its 49, the Lions took advantage of the short field and marched to the LSU 3-yard line. However, a bad pass from center on third-and-goal was recovered by LSU’s JaCoby Stevens at the SLU 18 and returned to the LSU 18.

The last of four-consecutive rushes by Edwards-Helaire resulted in a 7-yard touchdown and gave LSU a 31-0 lead with 2:03 to play.