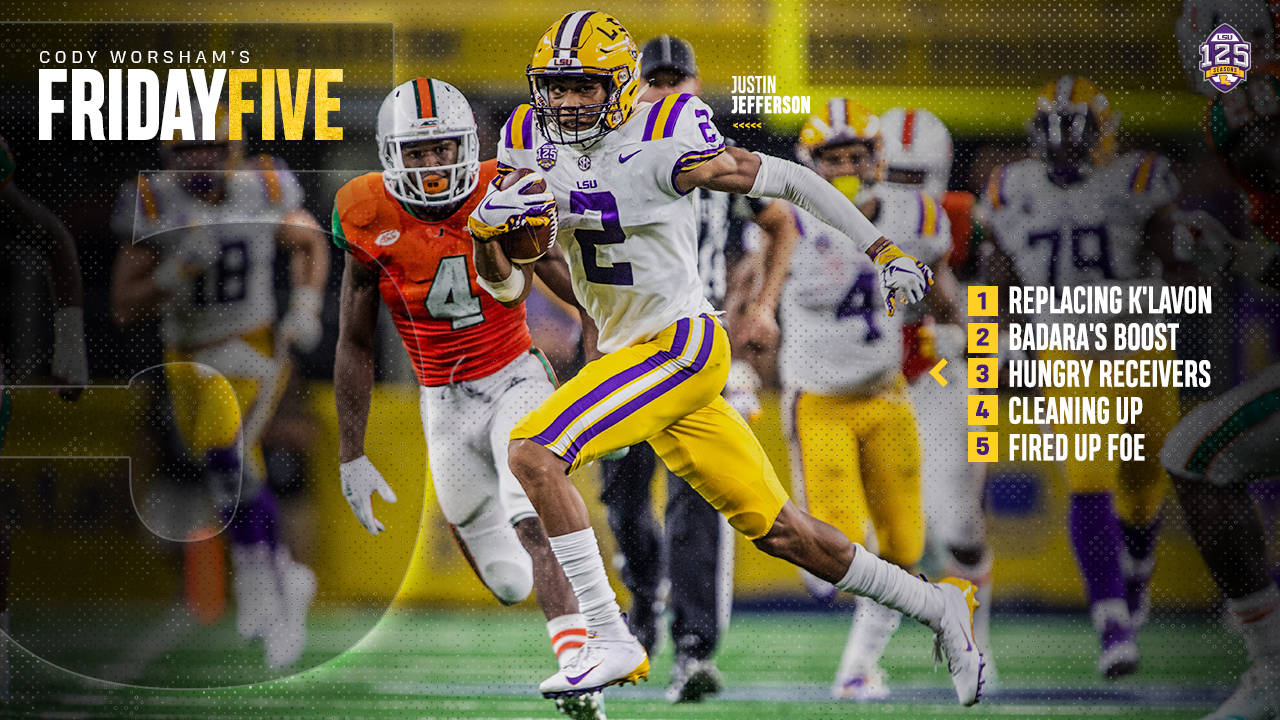 There is no direct replacement for sophomore edge rusher K’Lavon Chaisson, lost for the season to an injury suffered in the fourth quarter of the win over Miami. Orgeron and his staff considered the talented outside linebacker a “premier rusher.” With his season concluded prematurely, LSU will now look to a number of other players to fill in.

“If you look at anybody that’s stepped up, I think it’s Ray Thornton and Andre Anthony,” said Orgeron, who also mentioned Travez Moore and Michael Divinity – who can play either the F or B linebacker spots – as options.

The Chaisson asset that might prove most difficult to replace could be his versatility. Just as they used Arden Key in seasons past at a number of spots, Dave Aranda used Chaisson in a similar way against Miami.

“There’s some times, like with Arden, that we called defenses to make sure K’Lavon was in the right spot to rush,” Orgeron said. “I don’t know if we have to do that as much, but maybe one of these guys will emerge as a premier rusher. We thought K’Lavon was a premier rusher, so we moved him around. We still have the ability to do that, but we’ll see.”

Another injury in game one cost LSU starting right tackle Adrian Magee, who Orgeron said Monday will be out for two to three weeks. In his place stepped junior Badara Traore. The plan all along, Orgeron said, was to get Traore snaps against Miami regardless of Magee’s health, but now that Traore is entrenched at the position, Orgeron sees a more confident player.

“It’s not a sense of uncertainty,” Orgeron said. “He knows he’s starting. He knows he’s playing. I think it gives him some relief, take the pressure off of him, let him concentrate on the things he needs to get better at.”

In the final scrimmage of fall camp, Orgeron bemoaned a number of dropped passes from his receivers.

That problem seemed to reappear Sunday in Arlington, but a closer review of the film, Orgeron said, showed that things might not have been so bad for his wideouts.

“The one that (Justin) Jefferson missed, the guy tipped it a little bit, made a good play. Overall, I thought we caught the ball well. We want to catch every ball.”

Jefferson had the best game of the bunch – 5 catches for 81 yards – while Ja’Marr Chase nearly scored his first career touchdown on a second quarter reception that set up LSU’s second trip to the endzone one play later. Both have had good weeks at practice, and LSU has worked on getting Stephen Sullivan more involved, too, his head coach said.

Video of this play. Look at the pocket Burrow has to throw in and the separation Jefferson creates with his route. pic.twitter.com/k5gXjM3WfK

“I think Jefferson’s had a great week,” Orgeron said. “We’ve thrown the ball a little bit more to Sullivan, we want to get him involved. Ja’Marr Chase had a tremendous catch yesterday. They’re catching the ball better. I think there’s a tremendous hunger with them to perform well.”

Despite recording one of the most impressive wins across the college football landscape in week one, LSU still has plenty of room to improve. Orgeron saw several things on film he’s worked to clean up this week.

“I want to do a better job of clock management, making sure we don’t have to call timeouts at the beginning. Maybe get in a two-minute situation and let our quarterbacks do the two minute stuff we need to do.”

Many of those things were emphasized on No Repeat Thursday. The Tigers drilled down on short yardage, goalline, and red zone, and Orgeron felt it was an even better Thursday session than the one that preceded the win over the Hurricanes.

“I think we’ve corrected most of the mistakes from last week from the film and the practice field,” he said.

The theme of the week for the Tigers has been to treat every opponent the same, and Orgeron knows as well as anyone how fired up Southeastern will be to make the 40-mile trek west to square off against an FBS foe.

A former Northwestern State defensive lineman, Orgeron remembers how exciting the prospect was of taking on the in-state giant.

“I remember being at Northwestern. I think the biggest game we played was Tulsa. I thought that was the biggest stadium I’d ever seen. I know these guys are going to be fired up.”