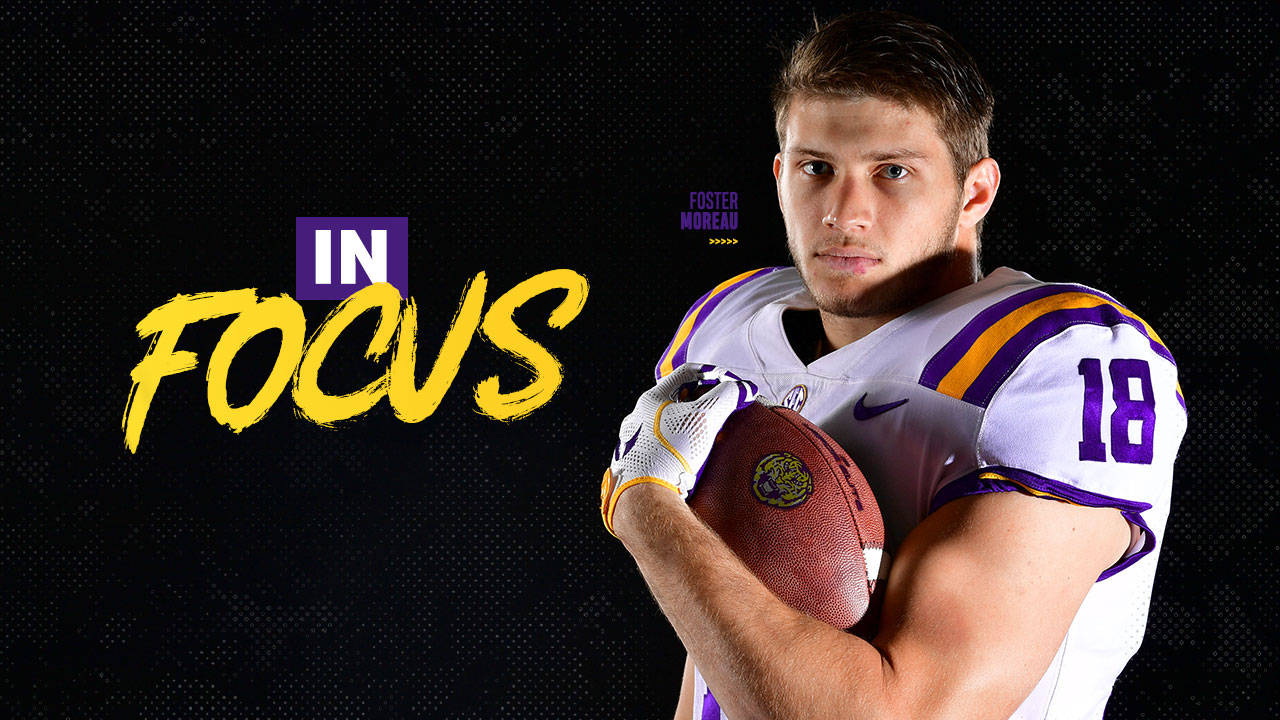 Alone in the back row of the tight ends room in 2015 with four veterans sitting in front of him, the loquacious freshman was trying to fit in and contribute in his first season with the Tigers.

Originally planning on redshirting, Moreau had a plethora of questions, stories and jokes ready each day until assistant coach Steve Ensminger put a stop to it.

“Look, you’re not allowed to talk anymore,” Ensminger told Moreau after everyone in the room was tired of listening to Moreau’s voice echo around the room and having to look back at him.

It was his freshman energy getting the best of him, but all Moreau wanted was to fit in and have a blast with the veterans in front of him like Dillon Gordon, DeSean Smith and Colin Jeter.

“When I got here, those guys would always tell so many stories about how fun it was traveling and being with each other,” Moreau explained. “They just had so many different memories, and I just wanted to be there for those moments and just enjoy those moments and have those memories myself. That was my motivation to try and play.”

Moreau observed and soaked in every parcel of information available to him. As the last player in the 2015 class after being given a scholarship to play at LSU on signing day, he was intent on learning from the players ahead of him, especially if he was going to have an opportunity to get on the field as a freshman.

Gordon taught Moreau how to block and hone in on being physical to get the job done. Smith instilled his route-running ability into Moreau, along with knowing when to step up and lead or when it was the time to make jokes and be serious.

As for Jeter, Moreau spent the most time with the junior tight end who took the freshman under his wing and began to understand how to always dedicate himself to the game and set the tone for work in the tight ends room.

Moreau ended up playing in all 12 games in the 2015 season and started in three games: Syracuse, at Alabama and at Ole Miss.

In March of 2016, Moreau was in the weight room on associate strength coach Ben Iannacchione’s first day at LSU. Moreau was working out and doing punishment runs after missing a tutoring session earlier that week.

Following the workout, Iannacchione pulled Moreau to the side and told him, “Once you start doing everything right off of the field, everything on the field will be right for you.”

That principle resonated with the sophomore. Every little detail off of the field began to truly matter to Moreau, and he operated off of that one statement that Iannacchione told him, picking up trash off of the ground, giving his friends rides wherever they needed to go, always going to class and never slacking off.

The combination of that day in March and Ensminger forbidding Moreau to unnecessarily speak convinced the tight end to lead the members of his room and the rest of the team by example.

He even took it to another level. Every time anyone would have punishment runs from his room, he would do it with them. After all, these guys were typically underclassmen trying to get used to balancing football, school and social life just like he was doing two years prior when he first joined the team in 2015.

He saw a spike in his stats in the 2016 season, recording six catches for 79 yards and hauling in his first career touchdown.

In the offseason, he was back to work again, ready for the 2017 campaign.

He started all 13 games at tight end for the Tigers in 2017 and finished fourth on the team with 24 receptions for 278 yards. He recorded two touchdown catches against Troy and became the first LSU tight end since Richard Dickson in the 2008 BCS Championship Game to grab two touchdowns in a single game. Moreau also had a career-long touchdown reception of 60 yards to help lead the Tigers to a convincing 40-24 win at Ole Miss.

However, his greatest contribution to the team was his example, in the weight room, in the classroom, showing respect to others, attending tutoring and trying to follow the lead of J.D. Moore – an owner of coveted jersey No. 18 last season — by working to attain perfection at every detail of his day.

Moreau’s relentless work ethic and leadership was why he was selected to wear the No. 18 for the 2018 season.

The history, the honor and the tradition, of course, awed Moreau, but being surrounded by his teammates was what really moved him at the first team meeting to start fall camp.

“It’s honestly recognizing the culmination of all of my efforts,” Moreau explained. “It wasn’t even getting the jersey, it was that my teammates gave me a standing ovation.”

Moreau enters his senior campaign on the watch list for the Mackey Award, which is given annually to the nation’s most outstanding tight end. He has a chance to break into LSU’s Top 10 for receptions, receiving yards and receiving touchdowns by a tight end.

That’s not important to Moreau, however. Being a leader and emphasizing success on and off the field are what truly matter to the senior.

“That one day in March 2016, the switch kind of flipped for me, and I’ve been doing the right thing ever since,” Moreau said.

Moreau pulled LSU teammate Jacob Phillips over during the 2017 season, giving him a message similar to what Iannacchione did for him a year earlier.

“You’re not human, so stop acting like it,” Moreau emphasized to the freshman linebacker. “You’re super human. These guys can’t break you.”

That is Moreau’s mindset and how he approaches every practice and every game as a Tiger.

Those are words that Moreau lives by on and off the field, and they have been keys to his success of growing from the last scholarship recipient in 2015 to the holder of jersey No. 18 this season.