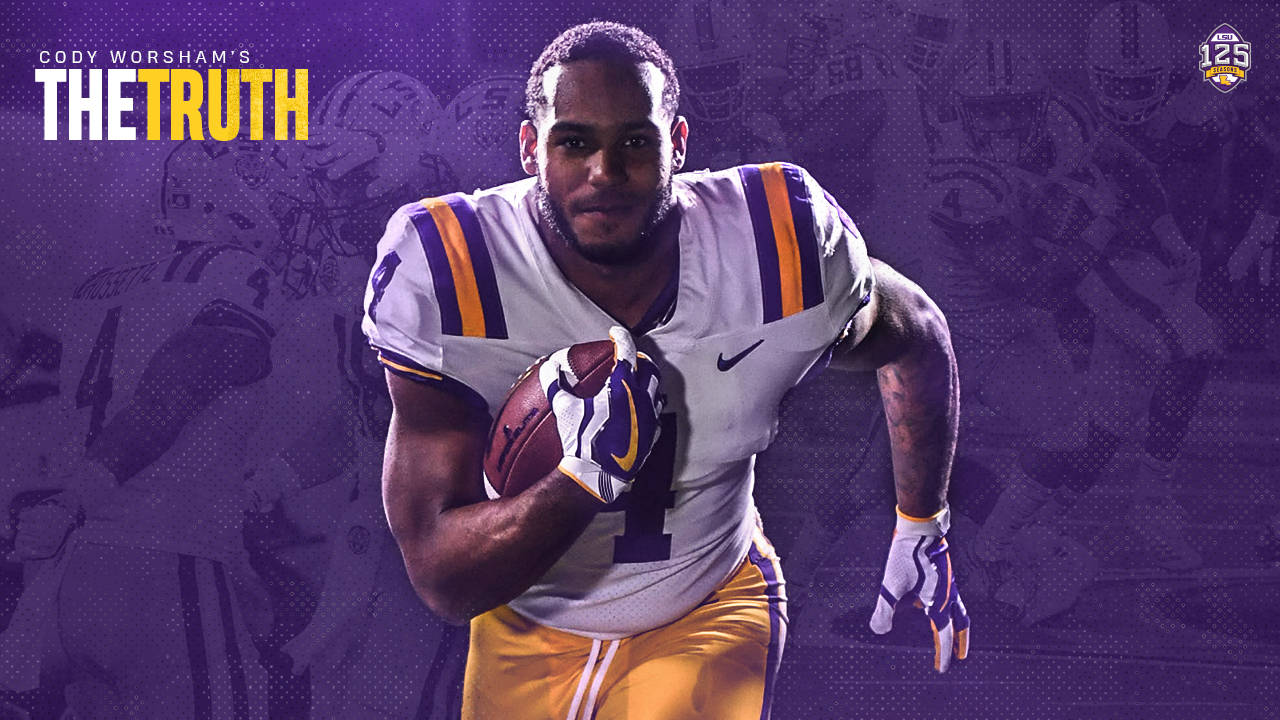 With 45 seconds left in the first quarter of his 36th game as a Tiger, Brossette raced 50 yards to put his team ahead 10-3, giving them a lead they would not relinquish in a 33-17 win over No. 8 Miami on Sunday night in Arlington. His first trip to the end zone since the 141 he made over his last four years at University High School on LSU’s campus – a figure that still stands as a Louisiana high school state record – the score showcased the primary weapon in Brossette’s arsenal: his patience.

At the snap of the ball, all 10 of Brossette’s teammates began blocking before he even moved an inch. As the Miami defenders and LSU blockers collided, Brossette stood still as a statue, waiting for the hole to open, the last man to move on the field.

Thanks to his teammates, that hole appeared, a large gap carved out by an offensive line executing its job to perfection. Thanks to the other tools in Brossette’s skill set – his superb vision, his ability to cut crisply and explode into space, and enough speed to outrun one of the fastest defenses in the country – he housed it, seeing just one thing the entire sprint, a long-awaited sight for the sorest of eyes.

“The goal line,” he said. “I just wanted to get in. I was so shocked. I was speechless.”

FOR THREE SEASONS at LSU, Brossette has waited patiently behind a stable of future pros at running back. He tallied 306 yards over three seasons, getting most of his snaps on special teams while buried on the depth chart behind the likes of Leonard Fournette, Derrius Guice, and Darrel Williams, all of whom are now NFL backs.

He’s also battled injury and heartbreak. A torn ACL cut his freshman season short, and a fumble in the loss to Troy in 2017, the lone start of his career, weighed heavily on him in the days after the game.

“I was able to wipe it out,” Brossette said. “When it first happened, yeah, it was difficult.”

The obstacles that made Brossette’s path back to the end zone so difficult began before he even graduated from high school. His brother, Mendel Esnault, passed away in April 2015, the end of Brossette’s senior year at U-High. This, while his mother, Rita, was battling cancer.

On Sunday, Rita watched from the stands at AT&T Stadium as her son enjoyed a career night: 22 carries, 125 yards, and two touchdowns. Afterward, Nick – who dedicated the season to his brother in postgame interviews – and Kelly Orgeron grinned ear to ear while waving Rita’s way from the field.

Update: it was Nick’s mom. If you know his story – his brother passed while Nick was in high school and his mother was fighting cancer – you can start to understand some of the emotions here. https://t.co/ErWy2FVVhV

“You gotta have your family support you,” Brossette said. “That’s what my family was doing. I had a lot of people calling me, telling me I was going to have a great season. I have a lot of people believing in me.”

That includes head coach Ed Orgeron. He remembers several other Tigers who waited until their senior years to shine before moving on to successful NFL careers, players who paid their dues as backups and on special teams before breaking out in their final seasons.

“Look at the history: Deion Jones, Duke Riley, now Nick Brossette,” Orgeron said. “And we saw it at camp. I felt that he was our most physical back. I told y’all that. I felt that he was going to have a good night, and he did. I’m proud of Nick. Nick was one of our team captains for the game. He’s been tremendous all camp, and I think that he’s going to have an excellent season.”

“All those guys, it was one year,” Brossette said. “Most of those guys were on special teams earlier in their careers. Then they had a breakout season their last year. Now they are doing really well in the league. Just looking at those guys, they motivate me.”

IN FALL CAMP, Brossette said he was ready to “shock a lot of people this year,” but he wasn’t surprised with his performance against Miami. He told roommate and freshman running back Tae Provens before the game his goal was to get 125 or 150 yards rushing.

“I spoke it into existence,” he said. “I just had a lot of confidence about myself.”

He also had plenty of help. Brossette credited quarterback Joe Burrow after the game for the line of scrimmage audible that led to his first score, and Burrow’s second-quarter dime to freshman receiver Ja’Marr Chase set the stage for the senior’s second touchdown, a one-yarder good for a 17-3 Tiger lead. That’s not to mention the offensive line that opened up holes in a Miami defense that surrendered just 3.5 yards per carry a season ago.

“I just had to believe in myself,” he said. “I just want to thank my teammates, my offensive line, and Coach O for giving me the opportunity.”

It’s an opportunity Brossette took full advantage of, displaying a tenacity on the field he’s shown regularly as a Tiger off of it. Of his 125 yards, 75 came after contact, according to Pro Football Focus, and he forced six missed tackles on the night. He also picked up six first downs, including a key fourth-down conversion just before his second touchdown.

It’s clear from his performance against Miami that Brossette enjoys playing on Sundays, but he still has a few more Saturdays ahead of him this year. He’s been waiting for them for a long time, too.

“I just knew I had to be patient,” he said. “Being patient, being humble. I showed a lot of people out there.”