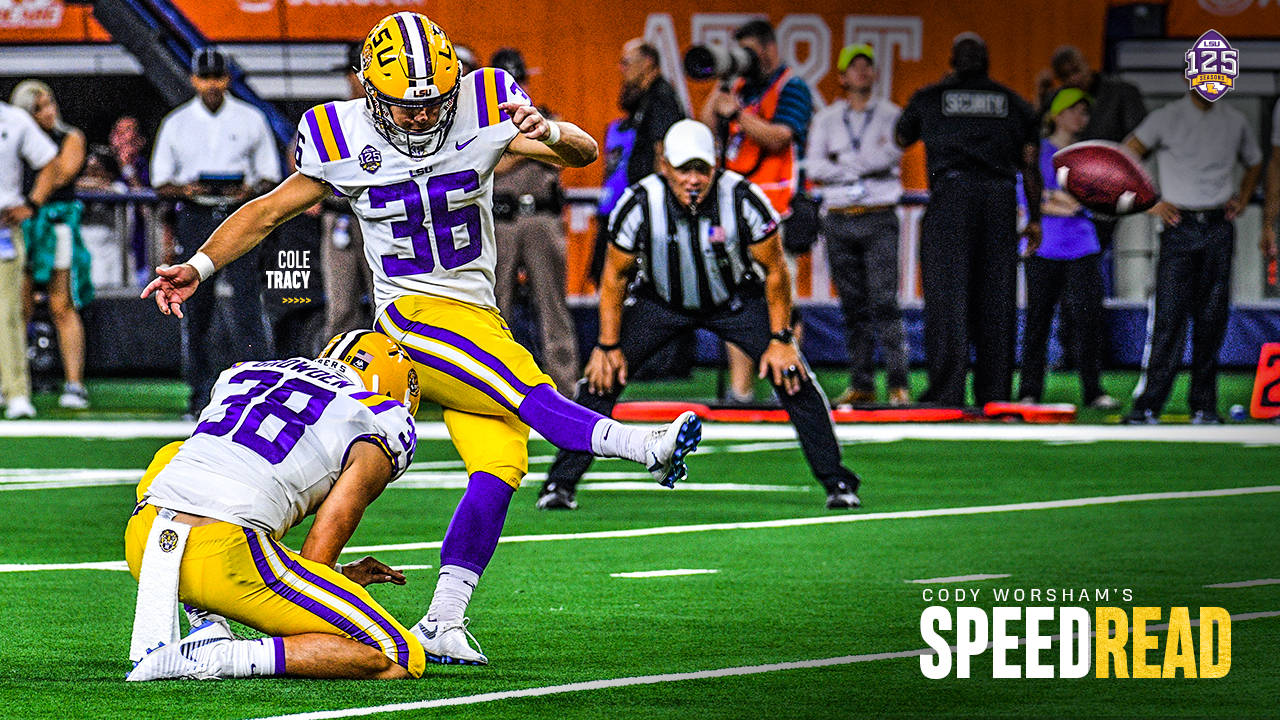 ARLINGTON, Texas — LSU’s 33-17 season-opening win over Miami was full of storylines: another win in AT&T Stadium, the debuts of an offensive coordinator and a quarterback, a special night for special teams, and plenty more.

Here’s week one of The Speed Read, a regular, point-by-point breakdown of the things that stand out following each game.

In his first 35 games as a Tiger, Nick Brossette, the all-time leading touchdown scorer in Louisiana high school football history, failed to reach paydirt once. By halftime of game 36, he’d scored twice.

His touchdown came on an audible from quarterback Joe Burrow.

“I saw the safety roll down weak,” Burrow said. “He was going to blitz off the edge. They had too many people, we couldn’t block them all over there. So I changed the play to the field. The O-line picked it up realy well, and obviously Nick finished the job.”

What did Brossette see?

The senior from Baton Rouge has battled injury and waited behind deep stable of running backs now plying their trades in the NFL, but he seized his opportunity on Sunday.

Jacob Phillips, you shall henceforth be known as Pick 6. https://t.co/ef5PTJ7UCj

Some nicknames write themselves. From henceforth — or, at least, for the next week – Jacob Phillips will be known as Pick Six.

The sophomore linebacker intercepted a Malik Rosier pass in the second quarter and returned it 45 yards for a score. It was LSU’s longest pick-six since Craig Loston brought one back 100 yards against Mississippi State in 2012 and Phillips’ first touchdown since his senior year of high school.

“I’m really proud of Jacob,” said head coach Ed Orgeron. “He’s really matured. He was the No. 1 linebacker in the country coming out a couple years ago. He’s going to be a really good player for us.”

During the game, teammates adorned Phillips in a Turnover Towel – a play off of Miami’s infamous Turnover Chain. After the game, Philips was sporting an oversized set of Mardi Gras beads.

“They gave it to me after the game,” he said. “They said it’s a turnover chain, Louisiana style.”

LSU’s off-and-on special teams showings in 2017 seem a thing of the distant past, as the Tigers were tidy under the eye of first-year coordinator Greg McMahon.

The Quote: “You kinda just keep your mouth shut for a while until people see you work.”

Junior quarterback Joe Burrow used the silent treatment to his advantage this summer. Upon his arrival from Ohio State, where he played sparingly in three seasons before graduating, Burrow decided to keep quiet and let his work do the talking.

“We had our conditioning tests. I tried to win every sprint,” he said. “You kinda just keep your mouth shut for a while until people see you work. Then they start welcoming you into the team, and you can start speaking up al little more.

“Probably halfway through camp I started being a little more vocal. Throughout summer workouts I was kinda just along for the ride, kept my nose down, worked really hard. I think my teammates saw that.”

Burrow emerged Sunday as a leader of the team, despite his novelty. He displayed toughness and poise, as well as athleticism, avoiding the heavy Miami pass rush and making the required checks at the line of scrimmage.

His approach, he said, was intentionally conservative at times.

“I just tried to play a little more conservative,” he said. “Their front 7 is really good. I didn’t want to take too many chances because I knew how good our defense was. I didn’t want to turn the ball over any, throw any interceptions. We wanted to keep that turnover chain in the box.”

“I thought he kept his poise,” Orgeron said. “He was able to get a win. That’s what counts.”

The Connection: Joe to Justin

LSU’s new-look offense isn’t just about a change in playbook. There’s also new personnel at both receiver and quarterback, and the uncertainty at both spots was a question the Tigers had to answer in game one.

Joe Burrow and Justin Jefferson certainly showed flashes of the requisite chemistry, connecting for 81 yards on five receptions, three of which went for LSU first downs. In all, Jefferson paced LSU with seven targets, clearly serving as Burrow’s go-to guy on the night after forging a bond this offseason.

“We went in every Saturday, 9 am, me and Justin, working on the timing of our routes throughout the entire summer,” Burrow said “That’s probably why we have the best chemistry right now.

Both have plenty of room for improvement: Jefferson dropped his first target of the game, and Burrow will want to see his completion percentage north of the 46 percent figure from Sunday night. But the Joe-to-Justin connection looks to be one LSU can lean on as the season progresses.