Tigers Set for 2018 Opener vs. Miami in Arlington 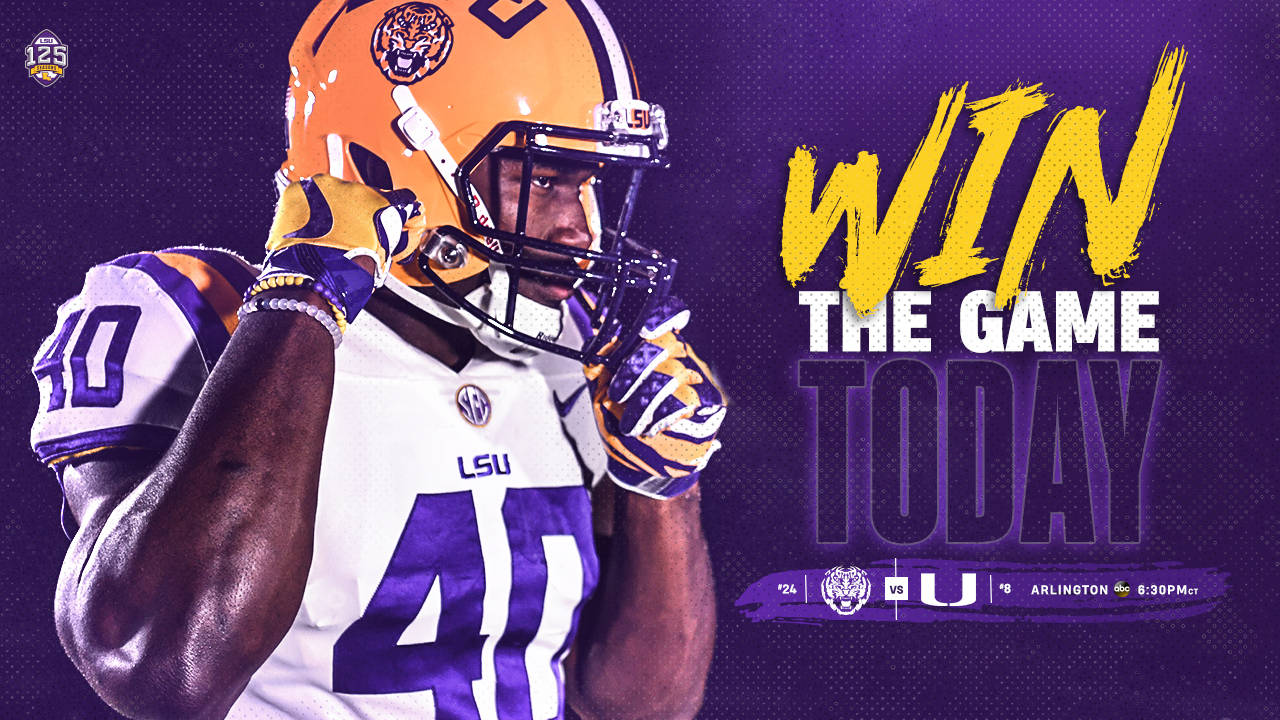 ARLINGTON, Texas — LSU, winners of 14 of its last 15 season openers and undefeated in three trips to AT&T Stadium, opens the 2018 season – the 125th season in program history – Sunday evening against No. 8 Miami.

Kickoff is set for 6:30 p.m. between the Hurricanes and the Tigers, who open the season ranked No. 24 in the Coaches Poll and No. 25 in the AP Poll. The game will be televised on ABC and broadcast to listeners on the LSU Sports Radio Network and at www.LSUSports.net/live. The game will also be streamed online through WatchESPN.

First look at @ATTStadium ✅
Time to get the job done tomorrow pic.twitter.com/d2p8Ncllra

The Tigers are set to begin their second full season under head coach Ed Orgeron, who has led his team to a 15-6 record since taking over as head coach five games into the 2016 campaign.

In twelve previous contests against Miami, LSU has posted a 9-3 record, most recently defeating the Hurricanes 40-3 in the 2005 Peach Bowl. Orgeron spent 1988 through 1992 as an assistant for Miami, winning two national championships there.

“We should be fresh,” Orgeron said Thursday. “You can feel it in the meetings. It’s time to play. We look forward to playing a very good Miami team.”

LSU features a new-look offense across the board, with Steve Ensminger taking over the reins as offensive coordinator. The former Tiger quarterback commanded the offense for eight games in 2016, during which his unit averaged 32 points and 464.9 total yards per game. Ensminger’s offense exceeded 38 points five times and averaged 7.1 yards per play.

“Exactly the offense I’ve envisioned for LSU,” Orgeron said of Ensminger’s playbook. “A spread offense, creating space, putting the ball in our playmakers hands and letting them play. He’s done exactly what he and I talked about. Our players respect Steve. He’s a tough coach. He’s an LSU Tiger. I think he’s going to do a tremendous job for us.”

Ensminger will be joined in the press box by senior offensive assistant and passing game coordinator Jerry Sullivan, a Miami native and longtime NFL assistant who served as an analyst for the Tigers in 2017. Sullivan was also LSU’s wide receivers coach from 1984 to 1990.

The new offense has a new quarterback in junior Joe Burrow, a Ohio State transfer who will make his first career collegiate start Sunday. Burrow won the job after demonstrating consistency throughout fall camp.

“He’s a good athlete, a good leader,” Orgeron said. “The team has bought into him.”

LSU fans all over the Omni Ft. Worth. An elevator attendant told me he’s never seen so much purple, including TCU fans. https://t.co/92bUSKlWbI

The most experienced offensive players are tight end Foster Moreau, who has started 19 games in his career and will wear No. 18 as a senior, and senior left guard Garrett Brumfield, a second-team All-SEC performer in 2017 with 12 career starts.

The defense, helmed by third-year defensive coordinator Dave Aranda, is led by a pair of All-Americans in Devin White and Greedy Williams, who last season became the first duo on the same team to lead the SEC in tackles and interceptions, respectively. White’s 10.2 tackles per game led all SEC defenders, while Williams ranked first in the league with six interceptions and 13 passes defended.

LSU also has fresh faces on special teams, led by new special teams coordinator Greg McMahon, who spent 11 years with the New Orleans Saints in the same role. Graduate transfer Cole Kelly, the 2017 Fred Mitchell Award winner as the best kicker in FCS/DII football, takes over the field goal duties for the Tigers.

The key word Orgeron has emphasized all offseason: execution.

Miami is entering its third year under head coach Mark Richt, who is 19-7 in his first two seasons since joining from Georgia. Richt has a 4-4 all-time record against LSU but has not faced the Tigers since returning to serve as head coach of his alma mater.

The Hurricanes went 10-3 in 2017, winning the ACC Coastal Division title and making an appearance in the Orange Bowl. They posted a 7-1 record in ACC play and return 14 starters, including quarterback Malik Rosier, running back Travis Homer, linebacker Shaquille Quarterman, and safety Jaquan Johnson.

“Miami is a very explosive offense,” Orgeron said. “If you overload the box, you’ve got 1-on-1 with their wide receivers. They’re very good football players. You’ve got to be able to tackle in space.”