Friday Five: Spots Still Up for Grabs Ahead of Miami 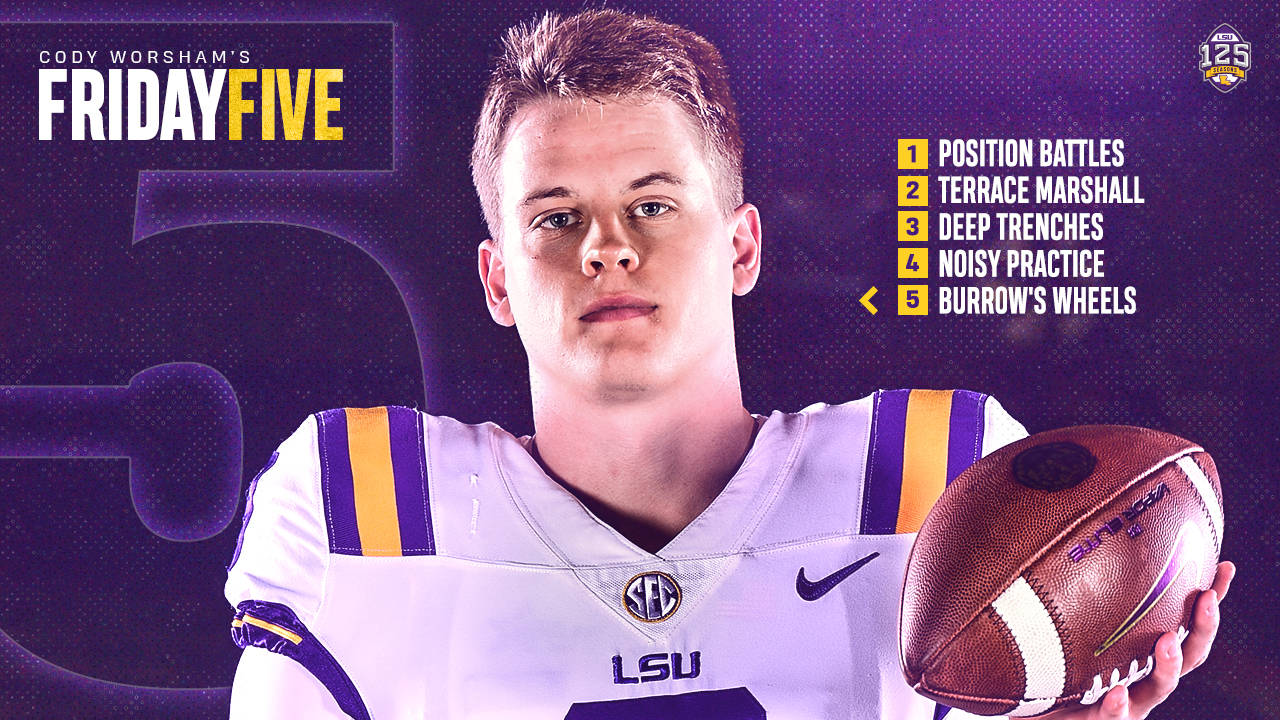 For just the fourth time in program history, LSU is set for a Sunday kickoff when it opens the 2018 season against Miami in Arlington this weekend.

Don’t get your calendars scrambled, though. It’s Friday, so that means it’s time for the Friday Five, recapping Ed Orgeron‘s final press conference of each and every game week, one point at a time.

The competition Orgeron spoke of on Monday for positions is down to two. At left cornerback, Kelvin Joseph and Kristian Fulton remain in a dead heat to start, while Adrian Magee and Badara Traore continue to share first team reps at right tackle.

“Those are the two final spots we are trying to make a decision to see who’s going to start,” Orgeron said. “Regardless of whoever starts, the other one is going to play.”

Deciding those spots will take place after the full week of practice. LSU will treat Friday like No Repeat Thursday and Saturday as Focus Friday, after which Orgeron and his staff will select starters.

“(Friday) is short yardage, goalline, and red zone, which is very important,” Orgeron said. “There’s a lot of one-on-ones there, there’s a lot of matchups. There’s tall receivers, there’s fast receivers, so we’re going to see who matches up the best. We’re going to do a full week of preparation and make a decision when we get to Dallas.”

One “or” that can be removed from week one’s depth chart is at one of the three wide receiver positions. Orgeron announced on his radio show Wednesday true freshman Terrace Marshall will start alongside Justin Jefferson and Jonathan Giles.

The 6-foot-4 Parkway native has impressed with his physicality, length, and playmaking abilities in scrimmages and practices throughout fall camp, edging out fellow true freshman Ja’Marr Chase.

“I think it’s safe to say he’s earned a starting position,” Orgeron said of Marshall. “He’s done very well, and he did very well again today. We plan on him starting.”

Chase “came out on fire” to start camp, Orgeron said, and has fought through the proverbial freshman wall. LSU expects Chase to “play a lot and make a lot of plays.”

Remember when LSU was down to four healthy defensive linemen last year against Mississippi State?

Consider lack of depth up front a thing of the past.

Asked about the management of reps for junior defensive lineman Rashard Lawrence throughout camp, Orgeron pointed out how the influx of talent in the trenches affords him the ability to get Lawrence and the rest of the starters up front rest when needed.

“We have two full defensive lines,” Orgeron said. “We have a third defensive line where some of the guys just aren’t ready yet, a big group of freshmen that can go in and play, but they’re not ready yet.”

According to Monday’s depth chart, LSU’s front lines up thusly in the two-deep:

“We have a complete rotation,” Orgeron said.

4. Blocking out the Noise

It was a particularly noisy practice Thursday in the indoor facility. LSU piped in artificial crowd noise for the first time all season in anticipation of a loud crowd on Sunday night.

“We’re preparing on both sides of the ball,” Orgeron said. “We know it’s going to be a home field advantage. It’s going to be like Death Valley in there. We just wanted to make sure that our offense, they haven’t practiced with noise yet, we want to make sure we could make our calls.”

The offense, the defense, and even the field goal kickers got a taste.

“It’s kind of exciting to put our guys in a game-type atmosphere,” Orgeron said.

This is LSU’s first full week of practice knowing who its starting quarterback will be for Miami, and Orgeron said Joe Burrow has embraced the role, just as his team has embraced him.

“(He’s) more sure of himself, taking his time, poised, making some big plays,” Orgeron said. “He ran the ball very well. Joe can run the football when he gets in trouble. He can extend plays with his feet. He’s a good athlete, a good leader. The team has bought into him.”

Asked if LSU had any designed runs planned for Burrow, Orgeron pounced.

Question: “Do you have any designed runs for Joe Burrow?”

Ed Orgeron: “Do you want the formation, too?” pic.twitter.com/odLwxZsAVl