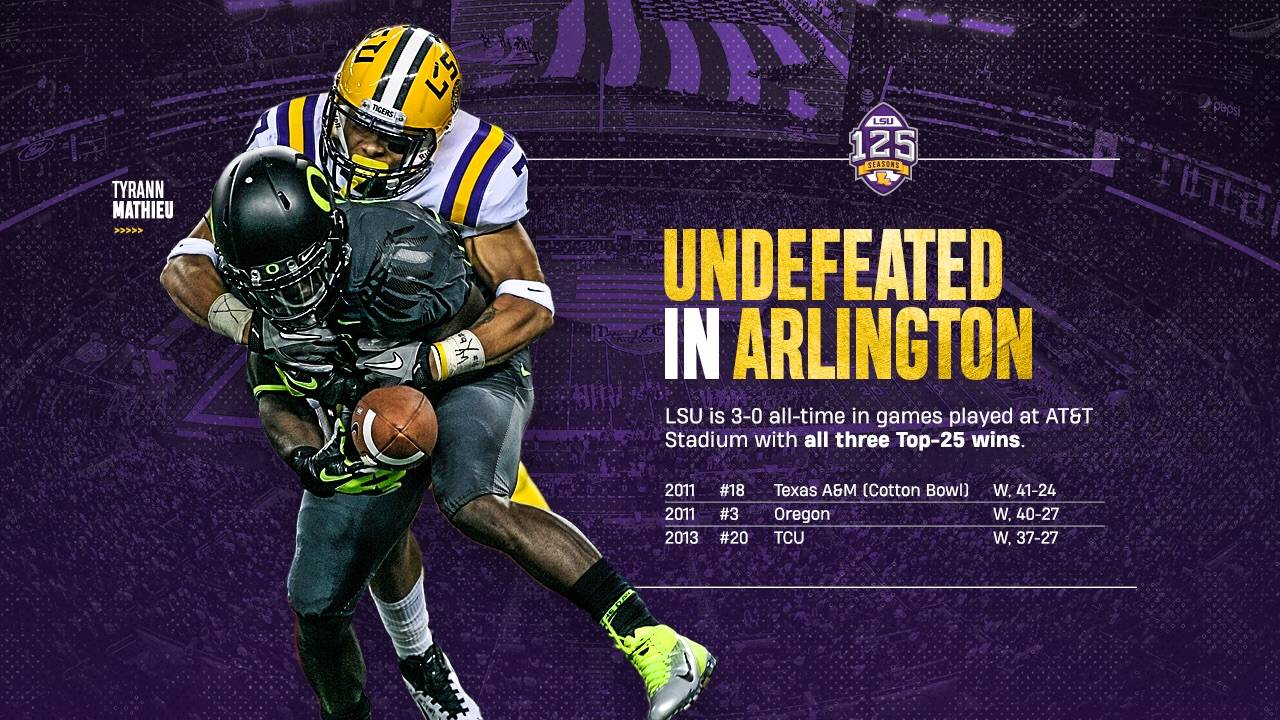 Ed Orgeron put it best on Monday when looking ahead to LSU’s trip to Arlington for its season opener Sunday against Miami in AT&T Stadium.

Who’s ready to take over Dallas this weekend? #GeauxTigers pic.twitter.com/3VXOuTWHNj

The Palace in Dallas has been LSU’s home away from home in recent years. The Tigers are undefeated in three trips to the home of the Dallas Cowboys, and all three wins have come against ranked opponents.

Here’s a look back on LSU’s history of turning JerryWorld into Death Valley.

The Recap: After falling behind 10-0, LSU used a Cotton Bowl-record three touchdown receptions from senior Terrence Toliver and defensive playmaking from a young corps of talented freshmen to roll to the first of what has since become seven straight wins over Texas A&M. Tryann Mathieu, Eric Reid, and Tharold Simon all intercepted Ryan Tannehill, and Stevan Ridley and Spencer Ware each went over 100 yards rushing.

The Star: Toliver capped off his LSU career in historic fashion, tying LSU and Cotton Bowl records with his three scores. The senior, who grew up just 45 miles from AT&T Stadium, entered the game with just two scores all season. His three touchdown of 42, 2 and 41 yards tied Wendell Davis’ school record in the 1987 Gator Bowl and Keyshawn Johnson’s Cotton Bowl record set in 1995 for USC against Texas Tech.

The Stat: 3×100 – Toliver, Ware, and Ridley became just the second trio in Cotton Bowl history to all eclipse the 100-yard mark in a single game.

The Quote: “Tyrann Mathieu is a special athlete. He’s learning how to make those plays in the confines of a defense. But he always made those plays. I promise you, we did know that he was that capable.” – Head coach Les Miles.

The Recap: LSU’s speedy defense, fielding exclusively nickel and dime units, shut down an Oregon attack that would finish the season third in the nation in scoring offense and won in dominant fashion. The Tigers overcame a 13-9 first half deficit, scoring 21 straight points to roll to victory. Only a pair of late Duck scores would make the margin closer than the contest really was, as the Tiger defense kept Oregon below 100 yards rushing.

The Star: Mathieu began a historic season that would end in Thorpe and Bednarik Awards – and a trip to New York in December as a Heisman Trophy finalist – in dominant fashion. He racked up 10 tackles, forced and recovered a fumble for a touchdown, and broke up two passes.

The Stat: 20 – LSU tallied 20 points off of four Oregon turnovers, including Mathieu’s second-quarter strip-and-score for the Tigers’ first touchdown of the season off a 53-yard Brad Wing punt.

The Quote: “When you work hard for so long to prepare for one team, that’s what ends up happening –  you dominate on defense.” – Defensive lineman Sam Montgomery.

The Recap: The Tigers showcased a high-octane offense, racking up 448 total yards to roll past the Horned Frogs. Zach Mettenberger tossed for 251 yards, including a touchdown pass to Jarvis Landry with six minutes remaining to ice the victory. LSU doubled TCU in first downs, 26-13, while converting 13-of-18 third down attempts on their way to leading the nation in third down conversions for the 2013 season. The Tiger defense, meanwhile, limited TCU to just 259 yards.

The Star(s): Jarvis Landry and Odell Beckham, who would go on to record-setting seasons in 2013, each eclipsed the 100-yard mark receiving for the Tigers. Landry snagged eight receptions for 109 yards and a score, while Beckham’s five receptions were good for 118 yards. Beckham also returned a fourth-quarter kickoff 75 yards to set up Landry’s game-clinching touchdown.

The Stat: 2001 – Until Landry and Beckham each exceeded 100 yards receiving against TCU, LSU had not seen two receivers eclipse the century mark in the same game since the 2001 Sugar Bowl, when Michael Clayton and Josh Reed accomplished the feat.

The Quote: “We’re getting older. We’re more comfortable playing football now under the big lights. A lot of things contribute to that: running back protecting well, offensive line protecting well, receivers running the right routes and catching the ball. It’s a pretty special thing when all 11 guys are doing the right thing.” – Quarterback Zach Mettenberger.