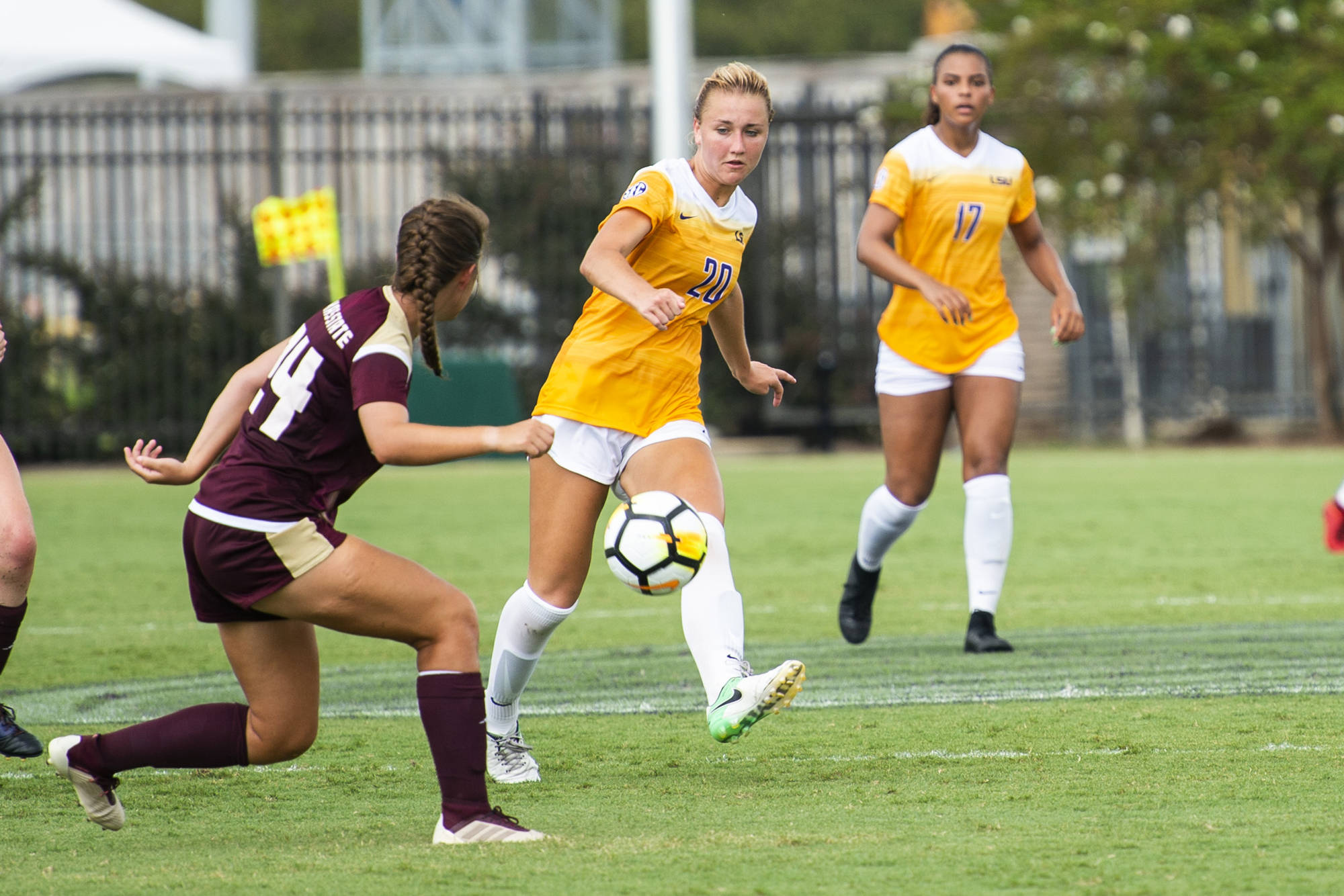 Baton Rouge, La. – Winners of its last two matches, the LSU soccer team (2-1-0) is headed to Mobile, Ala., for a Thursday night showdown with South Alabama. The game will begin at 7 p.m. CT.

Notes: The Jaguars have won the last five Sun Belt tournament titles earning them five straight bids to the NCAA Tournament … they are the four-time defending Sun Belt regular season conference champions … they are winners of 16 of their last 20 matches … LSU and South Alabama have faced off 10 times and the verdict is split right down the middle with LSU and South Alabama both having five wins apiece … the series dates all the way back to 1995.

Caroline Brockmeier picked up her second shutout of the 2018 campaign in Sunday’s win over Texas State. The redshirt senior was tested three times in the second half of LSU’s win with her biggest save of the season coming in the 68th minute. After a Texas State forward broke free in the box, Brockmeier made a leaping save and deflected the shot away with her left hand to keep LSU’s 1-0 lead. Brockmeier has now moved into sole possession of third place on the LSU all-time shutout list with 16. With six saves registered in 2018, Brockmeier now has 184 career saves, which is the fifth most in LSU history.

Adrienne Richardson was expected to bolster LSU’s offensive attack after arriving on campus in January after transferring in from Florida State, and she has done exactly that in her first three games for the Tigers. On Sunday against Texas State, she registered the first multi-goal game of her collegiate career with scores in the 21st and 71st minute to lead LSU to victory. She added in an assist in LSU’s first win of the season on Aug. 23 over Liberty to bring her point total for the season to five. She has 14 shots in the first three matches (4.67 avg.) to rank third in the SEC. Her nine shots she took on Sunday against Texas State are tied for the most by an SEC player in 2018.

Sophomore midfielder Tinaya Alexander broke through with the first two assists of her 2018 season on Sunday against Texas State. The first one came as she spun into a pass from Abbey Newton on the left side of the pitch before sending a low, curving ground cross into Richardson for the finish. Her second assist of the game came a little bit more casual to her as she dished off the ball to Richardson as LSU had a two-on-one attack in the Texas State box.

The Tigers have assisted on all three of their live ball goals this season. The only goal that was not assisted was Alex Thomas‘ penalty kick in the home opener against Villanova (Aug. 19).

LSU has taken 23 corner kicks in its first three contests on the pitch to average 7.67 per game; that number ranks second in the SEC in corner kicks per game. The Tigers registered 13 against Villanova (Aug. 19), four against Liberty (Aug. 23) and six versus Texas State (Aug. 26).

Adrienne Richardson (2g & 1a) and Abbey Newton (1g & 1a) have combined for eight of LSU’s 13 registered points early on this season. Newton has found herself playing a mix between the backline and midfield, but she hasn’t let that halter her offensive prowess. The beneficiary of a number of quality crosses in the first three matches, Newton has fired off 11 shots (3.67 avg. per game) to rank eighth in the SEC in that category.