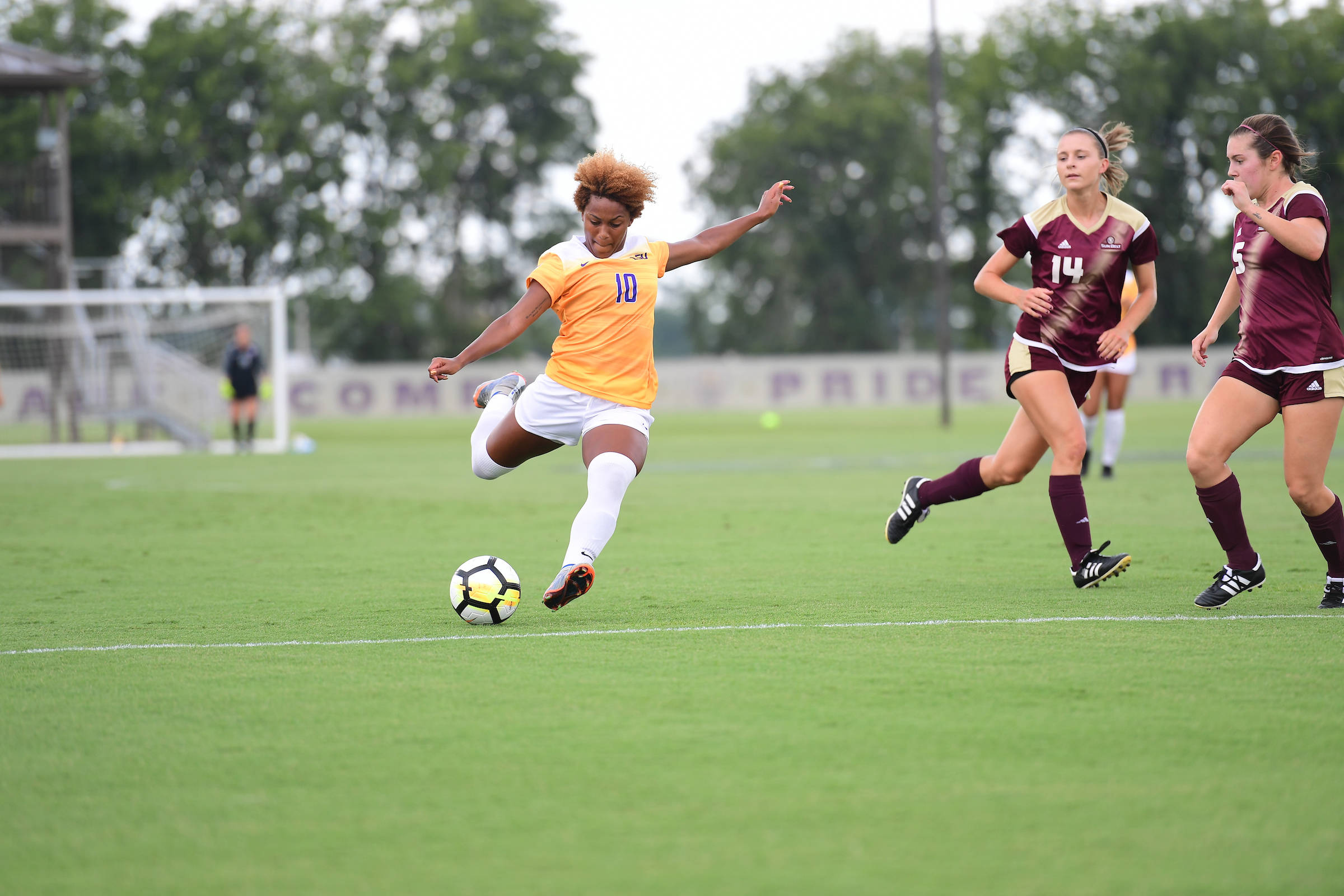 Baton Rouge, La. – The LSU soccer team won a 2-0 contest over Texas State on Sunday afternoon at LSU Soccer Stadium. The win pushes the Tigers’ record to 2-1-0 on the season, while Texas State fell to 1-3-0 in 2018.

Adrienne Richardson was the beneficiary of two brilliant passing displays to register her first two career goals in the Purple and Gold on Sunday. The first came in the 21st minute of the match. Playing on the left side of the pitch, Abbey Newton possessed the ball down in the corner and she found a streaking Tinaya Alexander on the left side of the box. Alexander received the pass in the midst of a spin and dished it off to Richardson in the middle of the box. Richardson timed up the cross and finished off the passing display with a nice one-touch shot to the back of the net to put LSU in the lead 1-0.

The second and final goal of the match came off the foot of Richardson in the 71st minute. It all started with Alex Thomas sending a ball in to the possession of Lindsey Eaton who nonchalantly dished it to a dashing Alexander down the right side of the field. After Alexander gained possession in the box and noticed Richardson sprinting to her left, she moved it to the left side of the box for Richardson to finish once again. Richardson’s shot beat the goalkeeper to the right and finished off LSU’s scoring efforts for the afternoon.

Postgame thoughts from @LSUBrianLee on both of Richardson’s goals. pic.twitter.com/Gvg0IQPfLk

LSU’s defense played a great match on Sunday to help senior Caroline Brockmeier register the 16th shutout of her career on Sunday. Brockmeier was tested three times during the match and she turned all of them away. Making what head coach Brian Lee called the ‘best save of her season,’ in the 68th minute, she allowed LSU to keep a 1-0 lead, and shortly after was when Richardson pushed the advantage to 2-0 in the 71st minute. With a Texas State forward moving in aggressively towards the net and losing a LSU defender, Brockmeier’s vertical range was tested and she was up to the task outstretching her left arm and punching the ball up and over the net. With the shutout, Brockmeier moves into sole possession of third all-time in program history with 16 shutouts. She now sits one shutout behind her current coach, Megan Kinneman, for No. 2 on the all-time list.

LSU dominated the game for most of the 90 minutes of play. The Tigers got the shooting barrage started with four shots in the first six minutes of play on Sunday. After a Marlena Cutura shot went wide of the net in the second minute of the game, Christyna Pitre registered LSU’s first shot on net in the fourth minute. The Tigers best chance in the first few minutes of play came off a corner kick that Cutura entered into the box nicely, but Abbey Newton‘s header was saved by the Texas State goalkeeper.

Cutura registered another shot on goal in the 24th minute of the game that was saved by the goalkeeper, but barely. Cutura’s shot from the top of the right side of the box initially made it past the deflection of the keeper and rolled just wide of the net. That resulted in a corner in which Cutura found Newton again, but Newton’s header went wide of the net.

The second half wasn’t much different from the first half as the Tigers came out blazing with opportunities. Richardson had three shots in the first nine minutes of the second half; the third one was saved by the Bobcat goalkeeper. In the 58th minute, a corner kick from Cutura was deflected away by the Texas State goalkeeper that went directly to Abbey Newton; she chested the ball before firing a shot from point blank range, but it was blocked by a Bobcat defender. Richardson worked fancily with Alexander on a give and go  in the 69th minute that resulted in a shot over the net.

LSU will travel to Mobile, Ala., for a Thursday night matchup against South Alabama. First kick is scheduled for 7 p.m.