Worsham: The Inside Story of Kristian Fulton 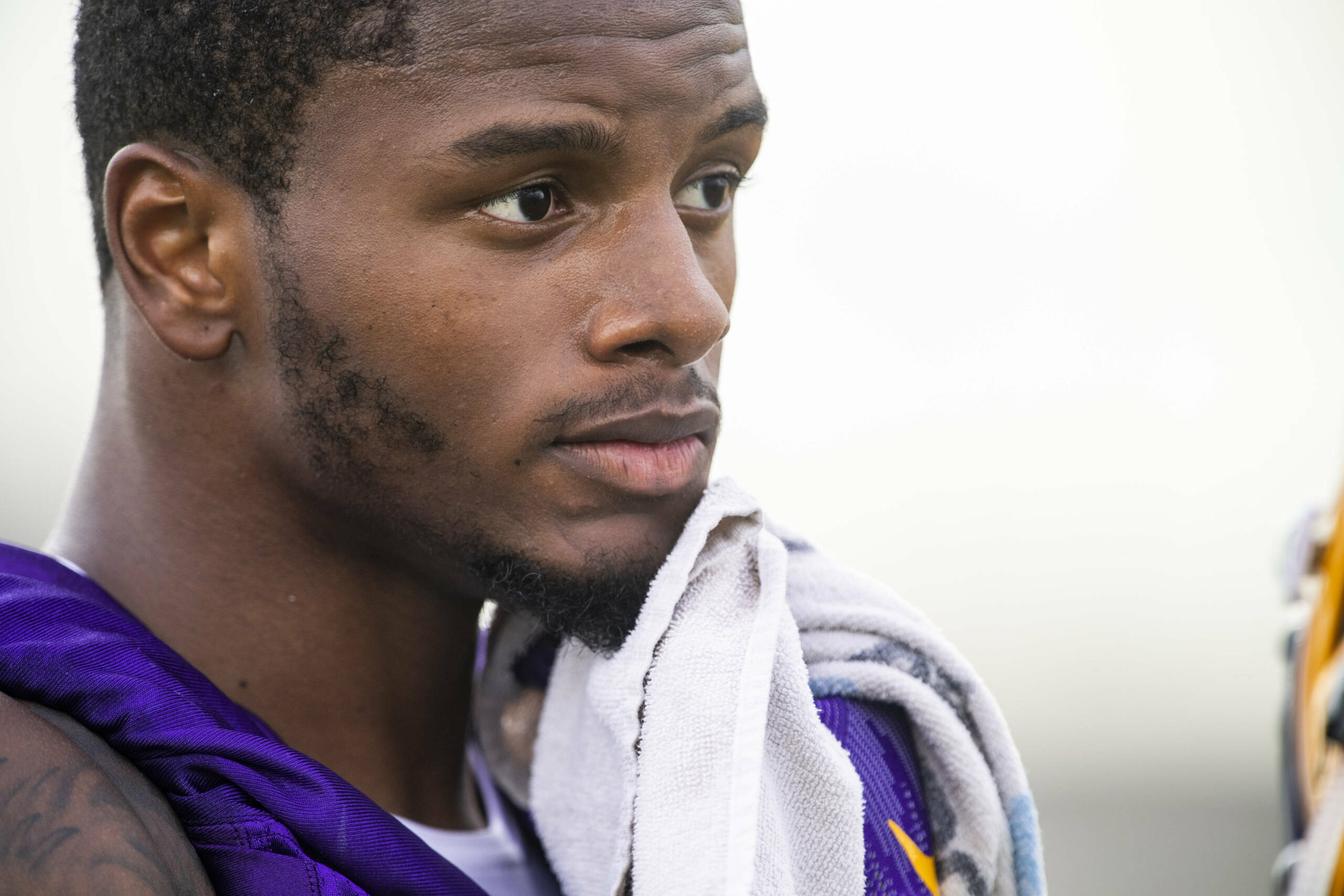 KRISTIAN FULTON’S MOMENT had finally arrived, the one he’d waited for after 18 months of tears, regret, and determination.

He just didn’t know it yet. After 18 months, Fulton could wait 18 more minutes.

He wouldn’t have had it any other way. Before Fulton could discover the news that he was immediately eligible to return to the football field for LSU, after a year-and-a-half on the sidelines, paying a price he never could have imagined for a moment of panic, he first had to finish practice.

It’s exactly what he’d done for those 18 months, after all. Joe Alleva had seen that firsthand. From the second the NCAA ruled Fulton ineligible for two seasons after he attempted to use a substitute urine sample during a February 2017 drug test, to this one, just minutes after Alleva received word the NCAA had reinstated Fulton a year sooner than expected. LSU’s athletic director watched as Fulton displayed impeccable character in the midst of unprecedented hardship.

Especially not on “No Repeat Thursday.”

“I didn’t want to disrupt practice,” Alleva says. “If I had told him, practice would’ve been disrupted. I just wanted Coach O to tell him at the end.”

So, instead, Alleva gave the news to head coach Ed Orgeron, and then he called Fulton over to the sidelines of LSU’s indoor practice facility. Alleva put his arm around Fulton, and offered the last note of encouragement he would need to navigate the final seconds of his suspension.

“Hang in there, buddy,” Alleva told Fulton. “Everything’s going to be alright.”

“Thank you, sir,” Fulton replied, and he believed Alleva, just as he’d believed all along. He knew, eventually, everything would be alright.

What he didn’t know, though, was that eventually had already arrived.

LSU KNEW FULTON made a mistake when he tried to use another person’s urine during his February 2, 2017 NCAA drug test.

They also thought the NCAA may have made one, too.

That was the thesis of their August 17, 2018 letter to the Academic and Membership Affairs (AMA) Committee, their last attempt to reduce Fulton’s sentence from two years to the one he’d already served in 2017.

The argument LSU made, in its simplest terms, regards the difference between the words “tampering” and “substitution.” In its original ruling on the Fulton case, the NCAA’s Committee on Competitive Safeguards and Medical Aspects of Sports determined he had violated Bylaw 18.4.1.4.3.1, which concerns tampering with a drug test and results in a two-year suspension.

After months of poring over regulations looking for answers with the help of legal counsel, associate director of athletics Miriam Segar believed Fulton’s infraction was governed, instead, by Bylaw 31.2.3.4.1(c), which regards substitution. (It’s worth noting that after the drug test administrator saw Fulton attempting to use a substitute urine sample at the time of his infraction, Fulton submitted his own urine sample, which ultimately passed the test.)

“We basically argued that this was a case of urine substitution as opposed to tampering,” Segar says. “The distinction in that is very fine.”

When Segar presented the distinction to Alleva this summer, he saw a chance to get Fulton back on the field.

The first go was a no-go and looked like the end of the road for Fulton’s appeal. LSU brought their argument before the safeguards committee on August 9 in a phone call, but the body that first determined Fulton’s violation merited a two-year suspension stuck to its original ruling, even after an impassioned case made by the AD himself.

“I thought we were done,” Alleva says. “But the kid didn’t stop, so we weren’t going to either.”

Wanna thank everyone for the Prayers and Support! God is real! Y’all kept my faith up when I questioned so much!

As Fulton had done for more than a year, LSU persisted. While Fulton remained fully engaged in practices, workouts, and class, Alleva and his staff continued to look for any remaining options.

They found one in a phone call to the SEC offices. Alleva had compliance dial up William King, the conference’s associate commissioner for legal affairs and compliance, for advice on how to proceed. King suggested LSU take the same appeal to a different committee: AMA.

This appeal took the form of a “legislative determination request for review” – a letter, rather than a phone call. LSU was able to make an explicit, rational argument based on specific interpretation of two related but distinctly different bylaws.

While public and media response to Fulton’s tale tended to gravitate toward emotional appeals – how, say, the NCAA was being unfair to Fulton, or by passionately comparing his case to others with far-less stringent punishments– LSU decided internally to stay the course with its fact-based approach rather than risk a public campaign that might backfire. The answer wasn’t in winning the battle of perceptions. This battle had to be won on the NCAA’s term – with cold, hard facts.

“We felt strongly that the legislation, as written, didn’t really support the penalty he was assessed,” Segar says. “It had nothing to do with an emotional appeal. It was all very technical.”

Thursday afternoon, six days after sending the letter and a full year before Fulton would’ve been eligible to play again, Segar received a phone call from the NCAA. The ruling was in. She quickly called Alleva, grateful the NCAA had considered their appeal and just as grateful to share the good news with her boss: Fulton was free.

AFTER THE FACTS won the case for LSU, the emotions took over.

Alleva left it to Orgeron to break the news at his previously scheduled press conference following Thursday’s practice. As reporters typed the news furiously into their phones and sent it into the Twitterverse, LSU’s players picked theirs up and filmed the ensuing celebration inside the locker room. Their tweets, Periscopes, and Instagram videos went viral, their elation shared with and by thousands of fans across the country – including their athletic director.

🗣 We just got word from the NCAA that @Kriss1_ has been reinstated effective immediately.

“The coolest thing for me was talking to Joe just after he found out and hearing his excitement over the phone,” says Robert Munson, LSU’s senior associate athletics director. “I could hear his smile.”

Orgeron missed that initial reaction, though it didn’t surprise him. As soon as the press conference ended, he called Kristian.

“He thanked me,” Orgeron says. “That’s Kristian, for you. I talked to his daddy. They thanked us. But really, it was to do what we did. We always treated him like everybody else. We always treated him like he was about ready to play. Took a lot of first team snaps, took a lot of second team snaps. But, he came to work every day. Never was pouting, never had a bad attitude. It’s a tremendous story.”

It wasn’t just the players and their Twitter followers who were going crazy.

“Immediately my phone starts going nuts, with journalists,” says Munson. “What was cool about it is, it took about 10 minutes for people to start asking me questions. The first 10 minutes was basically just a bunch of, ‘Hell yeah!’ Even the media were excited about it.”

The reason for everyone’s jubilation isn’t just about Fulton’s talent – though there’s plenty of that. Orgeron and his staff kept him in their plans, in hopes he might regain his eligibility. His engagement and LSU’s willingness to keep repping him makes the former five-star signee a legitimate option to start alongside All-American Greedy Williams.

It’s also a testament to the character he displayed in response to the mistake he made. And, to be sure, Fulton knows he made a mistake. He should’ve never tried to sneak a different sample during his test.

“He made a bad choice, but he’s a great kid who made a really poor decision, and I think he served his penalty,” Segar says. “I think the one year penalty is the right penalty based on the legislation that’s written.”

It’s also a penalty Fulton endured admirably. His perseverance inspired Alleva and his staff to work that much harder to get him back on the field.

“Thinking back when I was 19 years old, if I knew I couldn’t play for two years, I don’t think I would have been as disciplined as he was,” Alleva adds. “He just really impressed me with his character.”

His character has been proven. Now, Fulton’s ready to impress with his play.

“Kristian practiced everyday here like he was a starter,” Orgeron says. “He never blinked. I’m so proud of that young man. It’s the ultimate story of competing.”