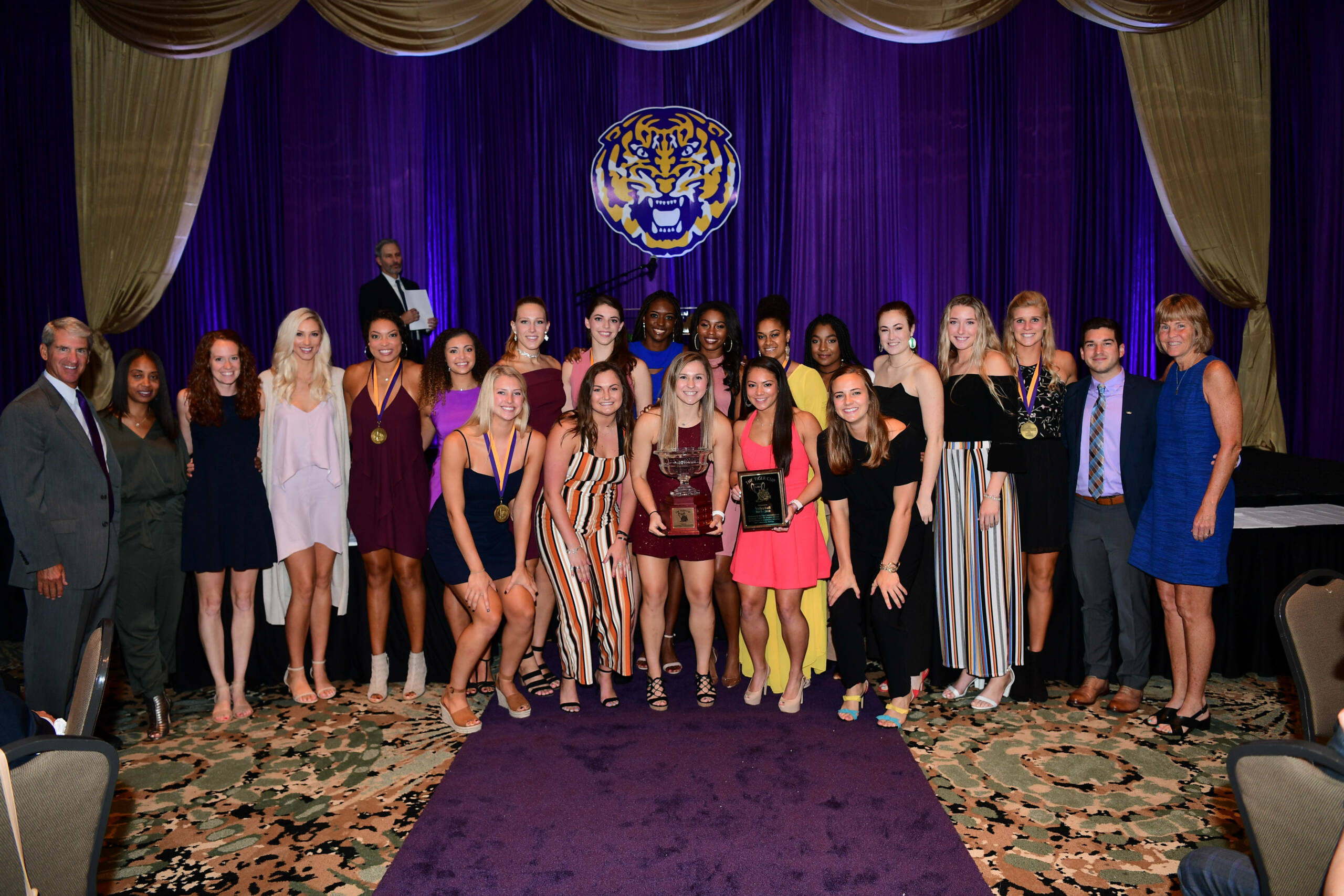 BATON ROUGE, La. – The 2018-19 season for LSU’s student-athletes kicked off on Sunday evening with the Academic Excellence Gala sponsored by LSU Tiger Athletic Foundation (TAF), Cox Communications Academic Center for Student-Athletes (CCACSA) and the LSU Athletics Department. The celebration at the Crowne Plaza Hotel recognized the academic accomplishments and athletic achievements of LSU student-athletes during the 2017-18 season.

Senior Harrison Martingayle of the men’s track & field team and member of the LSU Student-Athlete Advisory Committee (SAAC) welcomed the crowd before turning the evening’s festivities over the Senior Associate Communications Director Bill Franques who served as emcee. Martingayle will also be serving as the Vice Chair of the SEC SAAC and as the SEC’s representative to the NCAA Division I SAAC during the 2018-19 season.

The evening began with the Academic Procession of Scholar-Athletes. Over 200 student-athletes were honored with medallions for being a member of the SEC Honor Roll, an LSU Director’s Cup Award for Academic Excellence winner, or a member of Chi Alpha Sigma, the National College Athlete Honor Society.

In addition for TAF and CCACSA awards for success in the classroom, community and in competition, the unveiling of the annual Mikey Awards highlighted the evening. The Mikey’s are selected by the LSU Student-Athlete Advisory Committee (SAAC) members who represent LSU’s 21 athletics teams.

The Mikey Rookies of the Year had outstanding debuts in Tiger uniforms in 2017-18. Eden Richardson won the NCAA Doubles National Championship title with partner Jessica Golovin in May. The pair claimed the women’s tennis programs first national crown with a dominating, straight-set performance. Richardson finished the season 28-6 in singles play and 24-11 in doubles action, 19-8 when paired with Golovin. Daniel Cabrera earned five Freshman All-America awards following a stellar rookie season for the LSU baseball team. An outfielder, Cabrera batted .315 last season with 18 doubles, two triples, eight homers and 54 RBI. A Freshman All-SEC selection he was seventh in the league in doubles and eighth in RBI. Cabrera spent the summer as a starter for the USA Baseball Collegiate National Team.

Katie Kampen and Josh Growden won the Mikey’s for Leadership. The award is presented to student-athletes who exemplify leadership through every facet of the student-athlete experience and have shown a commitment to not only inspire and motivate their teammates and other student-athletes, as well as other people on campus and in the community. Kampen, a member of the volleyball team, serves on the LSU SAAC and on the SEC SAAC. Growden represents the football team on the Student-Athlete Advisory Committee.

The Mikey for Best Moment of the season went to the Gymnastics team. The Tigers added a special athlete to their squad in the past year in 8-year old Gracie Zaunbrecher. Gracie is battling a brain tumor discovered over a year ago while she was competing on beam and having trouble with her balance. Lexie Priessman and the rest of the LSU squad have given Gracie a boost as she goes through treatments, while she has become the little sister of the team, participating in team activities and being included in team introductions at home meets.

The Play of the Year was hard to ignore as it became an overnight sensation during the baseball team’s run at the 2018 SEC Championships. The Mikey was awarded to Todd Peterson for his 12th inning, two-run double against South Carolina after convincing head coach Paul Mainieri that he ‘hit bombs’ in high school. After getting LSU the lead, he picked up his first win of the season when he closed out the bottom of the 12th inning with the 6-4 victory as LSU advanced in the tournament.

Speed and precision were dominate in the Mikey’s Record-Breaking Performances of 2017-18. For the women, senior Aleia Hobbs produced the fastest sprints in the collegiate ranks and ranked among the fastest women in the world in 2018. She won three NCAA titles for the Tigers in the indoor 60-meter dash, outdoor 100-meter dash and as a member of the 4×100 outdoor relay team. Hobbs clocked a collegiate record 7.07 seconds to win the 60-meter title and owned five of the top eight wind-legal 100-meter times in NCAA history. She also anchored a 4×1 quartet the holds three of the top six times in NCAA history, including the collegiate record of 42.05 seconds set at the SEC Championships to claim gold. Adding to her accomplishments, Hobbs became the first woman since 1991 to win the two NCAA titles and win the USA Track & Field 100-meter title in the same year.

While Hobbs used speed to her advantage, the men’s honoree was incredibly precise in the pool. Sophomore Juan Celaya-Hernandez dominated diving competitions throughout the 2017-18 season. He earned First Team All-America honors at the NCAA Championships in March with a fourth-place finish on the 1-meter springboard and a seventh-place score on the 3-meter board. The First Team All-SEC honoree also earned honorable mention All-America accolades for his 15th-place performance off of the platform. He was one of five divers to earn All-America honors in all three events and the seventh-highest scoring diver at the NCAA finals. During the season he claimed the LSU records in both springboard events. His 1-meter score of 479.10 at the SEC Championships was also an SEC record, while his mark of 482.95 on the 3-meter board came against Auburn during the regular season.

Hobbs also received the TAF Female Athlete of the Year Award, while the male recipient was Devin White of the Tiger football team. As a sophomore linebacker in the 2017 season, White was named a FWAA and USA Today Second Team All-America as well as All-SEC First Team by the Coaches and Associated Press. He was one of the top linebackers in the nation and led the SEC with 133 tackles. White tied an LSU single-season record with double-digit tackles in eight games with a high of 15 against Auburn. At the end of the 2017 season, White was named a permanent team captain.

Dajour Braxton of the men’s track & field team and soccer graduate Lily Alfeld were named the Volunteers of the Year by the CCACSA staff. Braxton and Alfeld compiled many hours of giving back to the community in Baton Rouge and on campus. Alfeld was also the TAF Scholar-Athlete of the Year, along with football graduate John David Moore. Alfeld sent video greetings from her home in New Zealand, while Moore also accepted by video.

The 2017-18 Tiger Cup was awarded to the Volleyball team for the most production in the areas of competitive success, academic accomplishment and community service participation. The 2017 NCAA Tournament squad also earned the Community Service Cup for dedicating the most hours in service of the local community with 565.7 hours and claimed the highest team grade point average with a 3.550 for a women’s program. The Men’s Golf team recorded the top team GPA among the men’s programs at 3.315. Overall, LSU student-athletes contributed 4,177 hours of community service during the 2017-18 academic year.

This year’s LSU National L Club Distinguished Alumnus of the Year Award is former Tiger standout football player Verge Ausberry. Ausberry, a Louisiana native, currently serves as LSU’s Deputy Director of Athletics and has been a member of the Tigers’ Athletics administrative staff since 2001. He supervises the football, men’s basketball and men’s and women’s track & field programs, along with oversight of LSU’s sports medicine and research department, equipment staff, and strength and conditioning staff. Ausberry began his career at LSU serving in the compliance department and the highly-regarded Academic Center for Student-Athletes. He also served on the staff of the Tiger Athletic Foundation before moving into his role in senior administration. Ausberry played inside linebacker for the Tigers, lettering in 1986-89. He was part of two SEC championship teams, led LSU in tackles in 1988 and 1989, and played in four bowl games.

The only standing ovation of the evening came when softball player Shemiah Sanchez was named the recipient of the Eye of the Tiger Award. The award is presented to a current or former LSU student-athlete who has overcome great adversity to accomplish their academic and/or athletic goals with perseverance, dedication and determination. Sanchez has battled lupus, a chronic autoimmune disease, throughout her career. She has persevered through chemotherapy treatments and works closely with softball Athletics Trainer Pam Workman to stay healthy. In late May, Sanchez was feeling pretty good when she hit a game-tying grand slam at the Tallahassee Super Regionals.

Classes for the 2018 Fall semester at LSU begin on Monday, August 20.

Eye of the Tiger Award

TAF Athlete of the Year

Volunteer of the Year Awards

TAF Scholar-Athlete of the Year